“Battle of the Bands” at Strathspey Performing Arts Centre 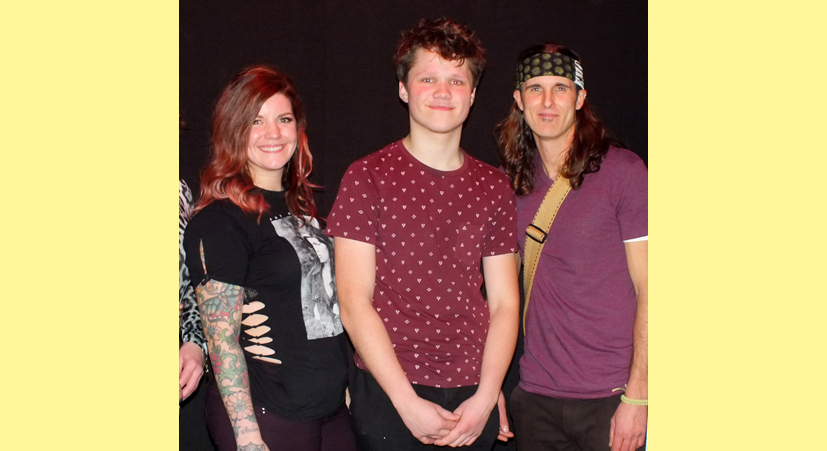 Bridges:  Left to right – Abby Mullendore, Alasdair Cameron and Barry Fougere have the opportunity to make the most from their win with eight hours of recording time.

The first annual Battle of the Bands took place on Saturday, November 24th at the Strathspey Performing Arts Centre in Mabou.
Six competitors each gave it their best as they competed for the 1st place grand prize of eight hours of recording time with sound engineer Rob Stone, a logo design from Sara Rankin Creative, and membership to Strathspey.
Saltwire celebrity Cindy Day brought her professional hosting skills to the event and kept the ball rolling all evening, even providing the audience with an impromtu weather forecast for good measure!
My Favourite Headache (MFH) is an alternative acoustic rock band from Cumberland County, Nova Scotia.  The band, which includes lead singer and guitarist Dylan Ellis, Drew Polegato, J. Wood, and Robby Osmond-Chown, has grown from four friends rocking out to covers in a garage, to headlining local events with their original written  music.  MFH was the first band to take to the stage and they left everything on that stage with a passionate and energetic performance.
The Corner Crew were the next trio to the stage featuring Malcolm and Elizabeth Matheson and Darlene Ellis.  They sang an original song called Owen Sound.
Ruth O’Shea was the third artist to the stage and was the only solo performer in the competition.  O’Shea sang and played ukulele.  Born in Ireland, she is a recent resident to Cape Breton with a fine voice and the ability to play a number of instruments.
Bridges is a folk-rock band from Inverness County comprised of band members Abby Mullendore, Barry Fougere, and Alasdair Cameron.  It was clear from the opening bars that this act came to be a contender.
Substitute Blonde is a rock/Indie band from the Strait area that has been playing together for over three years. Damian Phillips, Andrew Burch, and Justin “2 Stix” Landry performed their blend of ‘sloppy rock ‘n’ roll punk’ and they impressed the judges with their performance.
The Middle River Band’s Brian MacIver, Brian Phillips, Richard Herring, and Hector MacRae have been playing with energy and enthusiasm for over 10 years.  Recently, they’ve had the opportunity to open for Matt Minglewood and they are proud of their Atlantic Canadian repertoire.  The band performed their original song called Boomtown Blues.
The judges, Marilyn MacDonald-MacKinnon, Andre Pettipas, and Allie Bennett told the crowd that it was going to be a difficult decision to narrow it down to the two finalists for a showdown.  Following a few minutes of deliberation they came back with the names My Favourite Headache and Bridges.
The showdown took place and each act gave their best with Bridges finally being announced the winner.
“We’re just over the moon to win this contest here at home,” singer and songwriter Barry Fougere told The Oran following the win.
All the competitors showed great respect for one another and were good sports about the competition.
Strathspey Performing Arts Centre hopes to make this Battle of the Bands an annual event so all you aspiring musicians out there, take note, start writing and practising for next year!