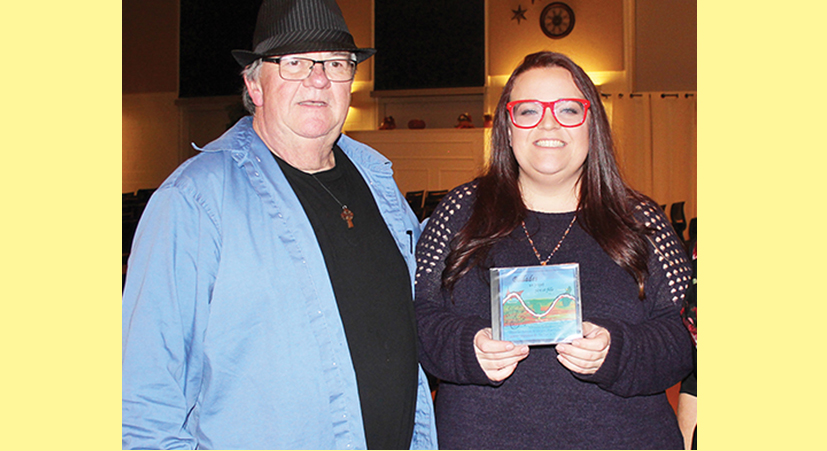 Fortunately for us, the often times troubled world in which we live does not offer us only disasters. It often gratifies us with small pleasures. Let's start with the beginning. For two years, in the mid-1970s, I had the pleasure and honour of hosting on television the very first variety show produced by Radio-Canada-Moncton. On this show, called Encore debut, I received Acadian artists and musician, singer-songwriters, and performers. Among others, Zachary Richard from Louisiana, who was at the time at the start of his career. Then one day arrived from Prince Edward Island a young songwriter, as only the island knows how to produce (I think of Lennie Gallant, Sara MacLean, Gene McLellan - the latter being born in Quebec before taking up residence on the island - among the largest and best known). Paul Gallant - that was his name - then played some songs of his own, which did pleasantly surprise me. To the point where, a little later, I went to see a play, a musical, written by him and that his theater troupe (La Troupe du Soleil oublié) presented in Memramcook (Une promesse dans le sable, obtained an immense success in the Maritime Provinces). The play ended with a song called Calgary that spoke of exile and touched me a lot because it conveyed the same emotion as Georges Dor's “Le Manic”. The same emotion, we hear, but not the same style of writing. And therein stops the comparison.
From then on, over the years, I was able to see Paul D. Gallant continue to enrich his repertoire at an accelerated pace, one song not waiting for the other, dotting it all over the musical universe of Acadie. Songs such as Les Gars de Mont-Carmel, another true and touching song on the theme of exile. But, unfortunately, apart from occasional  interpretations of his songs by other performers, no recording existed of these small treasures grouped in a single album and I personally deplored it. Until last year, Paul finally decided to record some of his best ballads, carried by the voice of his daughter Adrienne. It's now done. A very nice little album has just been released. Ballades, (Un projet père et fille vol 1) a father and daughter project, Vol. 1, contains, as its name suggests, ballads - 12 to be precise - of this songwriter. Other albums we hope likely follow this one with songs from other styles, as Paul has an impressive catalog of more than 700 songs. There is another song he wrote that is very funny, The Sofa, that I can not wait to hear engraved on an album. Because Paul is a great friend, a man whom I admire and for whom I feel a great affection, I run the risk of being reproached for lacking objectivity in speaking of him and his work. It is not only love that, as the well-known saying goes, makes one blind. Friendship sometimes too. So, I will try to stay objective and say that this album touched me, to use an expression dear to those who feel touched by something. Very beautiful ballads and, especially, the voice of his daughter, Adrienne, quite the perfect match, as they say. This is not surprising when you share the same DNA. And then, to top it all off, the CD contains liner notes of very instructive texts where Paul explains and evokes the first inspiration of each of these songs.
Three songs in particular catch my attention. The moving opening track Calgary, of course ("Jean-Guy, va t’en pas à Calgary"), which always makes me engender an emotional reaction, as well as the very moving Je te reviens and Mon chez nous c’est L’Acadie. Paul has the gift of creating simple universes (without being simplistic), with words and characters brimming with truth, which plunge us into daily life, which I often want, me whose style of writing sometimes wants a little more thought. Too much maybe. In this regard, it seems to me that with “Je te reviens” and “Mon chez nous c’est Acadie”, we have rarely expressed the love of his corner of the world with such sincerity and emotion. This last song served as finale for the musical The Grand Cercle, signed by Paul Gallant with arrangements by Scott MacMillan and presented for several seasons by Le Conseil des arts de Chéticamp. I had the pleasure of attending this production a few years ago and came out blown away with even more admiration for the work of this talented songwriter.
To make a long story short, you do not doubt it now after what I just wrote, I loved this CD and I hope that it will be the same for all those who will listen to it. Despite the pleasure that Adrienne's voice gives us, I would have loved that Paul himself had performed some of his songs. No matter how good the interpreters (and Adrienne is very good, no doubt about it), few are those who arrive as well as the author to read and say what is between the lines (the unsaid) in a text. But, we must take his part, Paul having long ago decided (curiously, it would be after his appearance on the show Encore debut where, he wrote somewhere, he was uncomfortable to find himself in front of an impassive and cold camera, without any audience) to no longer want to be a “stage artist”. From there to saying that he did not want to interpret his own songs, there was only one miss step he probably took, since he chose to be absent from this album as an interpreter. On the next one, maybe? It's never too late to do well, dear Paul.