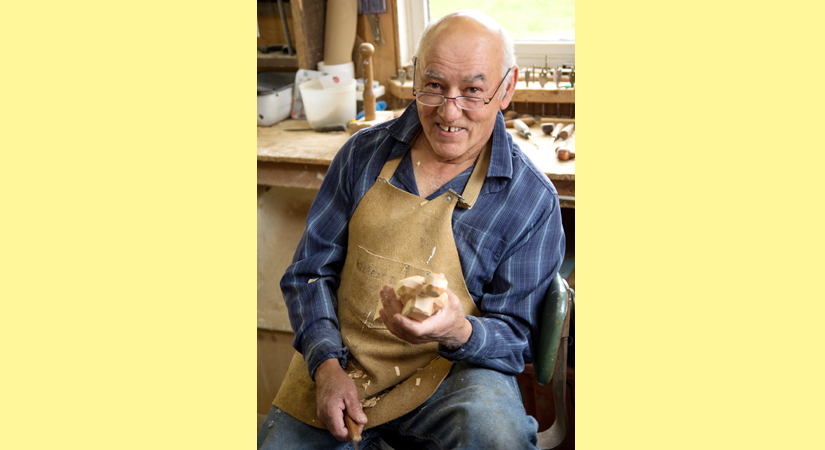 A pop-up gallery at the Coady and Tompkins Library in Margaree this month celebrates folk artist and Nova Scotia Heritage Day 2019 honouree, Maud Lewis.
The exhibit runs through the entire month of February and features two of our own beloved Inverness County folk artists, Bill Roach and Michel Williatte-Battet.
The exhibit was organized by Coady and Tompkins staff members Kim Tilsley and Kaye Robertson, and it is definitely worth a visit.
The colourful and expressive works of art by Roach and Williatte-Battet certainly brighten up the room in winter.

“We’re so excited to have their works here on display and we’ll be sad to lose them after the exhibit is over. Every day we have our new favourites,” Tilsley told The Oran last week.
The exhibit is part of a month-long celebration of Maud Lewis.
“When we were looking for ideas on something to do, we thought why can’t we have an art gallery in honour of Maud Lewis,” said Kaye Robertson.
“The artists were very keen to do it and they thought it was a great idea to do it,” said Tilsley.
In addition to the works by Roach and Williatte-Battet, there is a beautiful hooked rug tribute to Maud Lewis made by Eileen Coady.
On Saturday, February 9th, there will be a window and snowbank painting event called Just Like Maud! The participants plan to brighten the dreary month of February by brightly painting the library windows and transforming the snowbanks outside the library just like Maud did in her tiny Nova Scotia home. This will be a family fun event for all ages.
On Saturday, February 16th, a children’s folk-art workshop will be led by Mary Pemberton. Pemberton will guide the children in creating their own folk-art objects using techniques and examples from folk artists near and far. You may contact the library to register.
On Friday, February 22nd, at 7:00 p.m., it’s movie night at the library with the outstanding feature film, Maudie, starring Sally Hawkins and Ethan Hawke. This film tells the story of the life of the now famous Nova Scotia artist.
“The library has been a busy place of activities this winter. Mondays have a Mother Goose event for parents and tots in the morning and there is a fibre event in the afternoon, along with a fly tying at night. Friday has a winter wellness program that goes on for the next six weeks. Saturdays for Heritage there are events in conjunction with the exhibit and the tribute to Maud Lewis. We are also going to be doing an environmental film series in March with Paul Strome. We’re just having a ball!” Tilsley concluded.
Acadian Metis, born and raised in Cheticamp, Bill Roach is a completely self-taught artist who has been making art since his early childhood.
Bill began making his living carving full time in 1990.
Many of Bill’s works are colourful and whimsical in nature and all of his carvings are made of pine.  Some of Bill’s works are done for commissions but the remainder come from his own imagination.
Bill owns and operates his own studio and gallery (Sunset Art Gallery) in his home village of Cheticamp.
Michel Williatte-Battet was born in Montreal, Quebec in 1960.  Michel moved to Cape Breton Island in 1989 and opened Gallery La Bella Mona Lisa in St. Joseph Du Moine.  It was that same year that Michel began to paint and carve.  Michel’s works have often been described as whimsical and humorous.