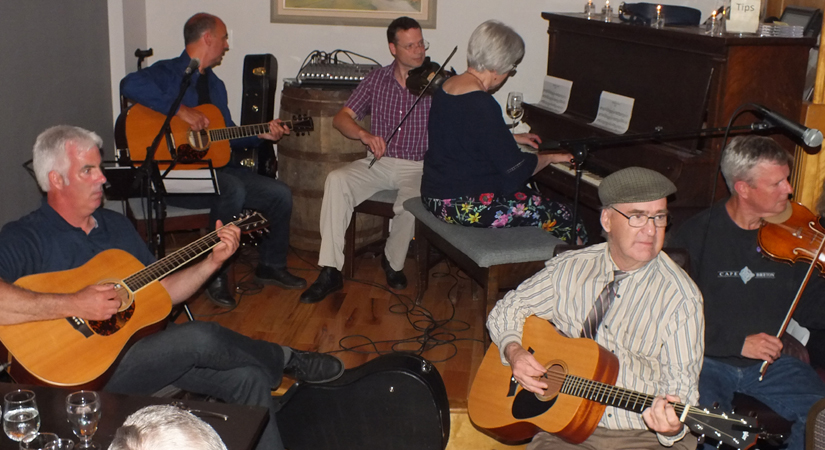 Some of the musicians who participated in the event at Glenora Distillery in Glenville.

It was a very special night last Saturday as Glenora Distillery presented its International Night of 1000 Fiddles.
Glenora Distillery, North America’s first single malt whisky distillery, located in Glenville, Inverness County, was seeking to establish a world record of the most fiddles played on one night worldwide.
While the figures haven’t fully been tallied yet, things are looking positive for the venue given the support they received both locally, nationally, and abroad.
To participate and be a part of this historic event, one could show up at The Distillery and play the tune “Fiddler’s Choice,” a tune composed by Bill Sampson for this event.  Fiddlers could also play a reel of their choosing on the night of August 31st, 2019, in their home or wherever was convenient.  Fiddlers were asked to let Glenora know they participated by emailing them at This email address is being protected from spambots. You need JavaScript enabled to view it. or by posting their picture or short video on their Facebook event page with the hashtag #Nightof1000Fiddles.

Early into the event, with a full house at Glenora Distillery already evident, Bob Scott, vice president of Glenora, took to the stage to introduce the event and to speak about the support already received. Support had already come in from across Canada, Ireland, Scotland, Norway, Russia, USA, Finland, Holland, France, Germany, Israel, Australia, India, and more and Scott and the Glenora management and staff were obviously pleased.
“We even had congratulations from two Country Music Hall of Famers, Charlie Daniels and Charlie McCoy,” said Scott.
Before the music began Saturday evening, Scott and Glenora staff took time to pay tribute to the late John MacDougall, who passed away in 2008, a well-known fiddler and music teacher who performed for many years at The Distillery. MacDougall was a gifted and prolific composer of some 38,000 fiddle tunes now in the care of Cape Breton fiddler, Ian MacDougall.
Scott says MacDougall was the inspiration for Glenora’s Fiddler’s Choice.  The front of the packaging box shows one of MacDougall’s fiddles while the back shows his photo, performing in front of Glenora Distillery.
Scott says he’s pleased that John’s story is told on the packaging of the Fiddler’s Choice whiskey product, which has received great tasting reviews worldwide and which is now sold internationally in Europe, Spain, France, and Russia as well.
Speaking with Scott on Tuesday morning, The Oran also learned, too, of the wonderful support given by Natalie MacMaster and husband, Donnell Lahey, who managed to gather 16 Leahy family fiddlers to join in the celebrations at their Leahy Farm Market in Ontario.
Scott noted that Glenora also received some amazing support overseas from a gentleman named Rob McCorkell of the Didmarton Bluegrass Festival in the United Kingdom. McCorkell has over 600 people on site with an estimated 100 or so fiddlers among them for the Glenora event occasion.
“I’m on cloud nine,’ said Scott.  “The generosity and support of everyone has been so amazing and it was such a special evening,” he added.
With a full house last Saturday evening and wonderful music throughout the evening, the patrons at The Distillery were in their glory.
Hats off to the Glenora staff who were so accommodating and made the guest feels so at home and to all the musicians who performed and made it such a special evening. Now, lets get counting to see if we have a world record!