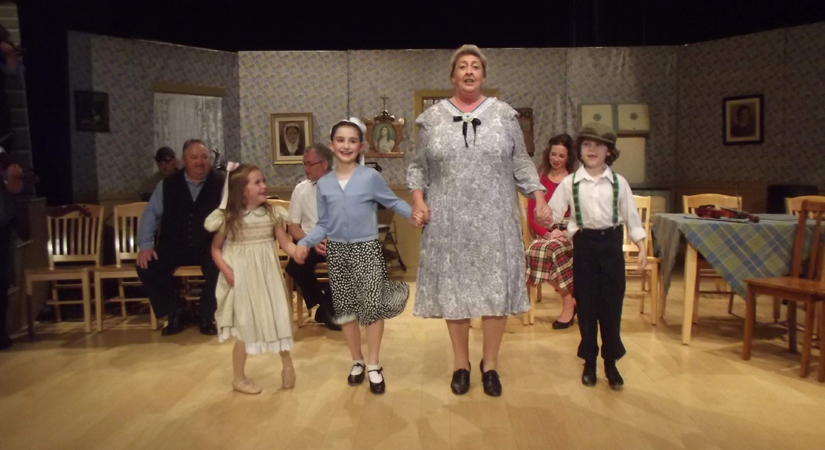 “We want to take you back to a time when neighbours were in and out of each other’s homes for an evening and when everyone pulled together for the good of their community,” says Duncan MacDonald, producer of the Keppoch series of shows.
The fourth show in that series, Keppoch Mountain: Stories from the Ceilidh House, comes to Strathspey Performing Arts Centre in Mabou on Saturday, September 21st, at 7:00 p.m.
The show is described by the producers as followed: “Threatened with a possible school closure, the spirited farm folks on Keppoch Mountain are pulling together to raise the $25 needed to hire a new teacher to keep Morvan School open. Short on cash but rich in talent, they straighten their skirts, haul up their trousers, turn down their rubber boots and put on a community concert to sing and dance their way toward their goal. When two strikingly different candidates apply for the teaching position, the school trustees think it is only fair to give them a taste of what the young ones on the mountain can do. Then they get down to deciding whether it is Latin or Gaelic they want echoing from the one-room school. They get their eyes opened when the discussion turns to curriculum and classroom discipline.  Pull up a seat in the MacLean farmhouse kitchen for the music and stories of Hollywood, potholes, lumber camps, berry picking, courting, moonshine, and the surprising frailties of outdoor toilets.”
In an interview with The Oran this past week, Duncan MacDonald noted that these concerts have been a way of paying tribute to the people who lived in the smaller communities throughout our province.
“There were 67 families in the Keppoch area at one time. There was a church, a general store, a school; there were bootleggers. There were 84 school districts in Antigonish County at one time before the population began to decline after WWI.
Principal cast members include: Carol Anne MacKenzie, Joe MacKinnon, Terry MacIntyre, Ann Holten Melong, Laura Teasdale, Ralph DeCoste, and West Mabou’s Sarah MacInnis.
This show promises to tell a great story of the smaller communities and families of rural Nova Scotia and you will no doubt be entertained by a fine cast of actors and musicians as well.
Tickets are available by visiting www.strathspeyplace.com or calling 902- 945-5300.
For more information, visit Facebook.com/Ships of 1801.