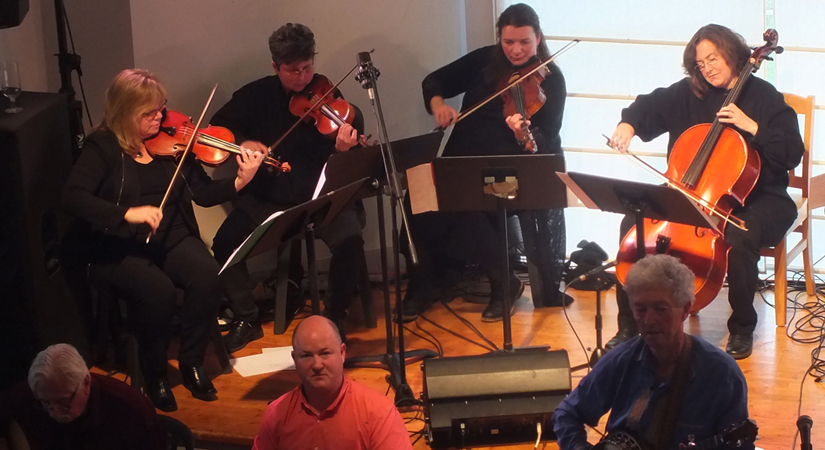 “Woodland Revival is a piece of music that is a manifesto for this moment in time. It speaks the truth of what we have lost, yet also shows us what we still have: our music, our vibrancy, our joy, our love, and our energy to keep going as one world.”  – Johanna Padelt.

It was a weekend unlike any other at the Inverness County Centre for the Arts as the annual inFlux Festival of the Inverness County Centre for the Arts featured the world premiere of Scott Macmillan’s Woodland Revival.
Gratitude and wonder were so evident as art and music was shown to do what it does best - to move us, to motivate us, and to inspire.
As the centre of the event-filled weekend, Woodland Revival brought an eclectic array of world and local musicians together on stage to share a happening and musical vision to inspire forest diversity and revival.
“I was so happy to be there; so excited. It’s good when all these cultures get together and we do something that makes everyone so happy. As a residential school survivor, drumming is my healing, but I never thought I’d be sitting there, playing with an orchestra.”, said Margaret Pelletier, an elder and member of We’koqma’qewska’q, the We’koqma’q First Nation women’s drum group.
“A breathtaking tour de force by composer/director/musician Scott Macmillan. It was enormously enjoyable and a fascinating combination of musicians from different traditions,” said Ann Schroeder of Mabou.
“The Woodland Revival concert and the inFlux festival built around it brought music at the Arts Centre to a whole new level. The ambition of the project, with the world premiere of Macmillan’s important, original composition, multiple concerts, an ensemble of incredibly talented, professional musicians, related arts events, and the large and appreciative audience, demonstrated the caliber of cultural programming that our community can generate and support,” Elizabeth Whalley, manager of the Inverness County Centre for the Arts, added.
“The piece demonstrated the chaos, struggle, strength, and survival of a necessity of life - so poignant and so inspiring - all enveloping. Immersed audience members were actually shedding tears. Scott, and all the stunning participating musicians – you gave us an experience that will never be forgotten. Thank you,” said Georgi de Vries of Lake Ainslie.
In addition, the We’koqma’qewska’q drummers, The Blue Engine String Quartet, and a trio of Persian musicians (Mohammad Sahraei, Saeed Foroughi, and Nikoo Mansourifar) who played an integral role in the piece, there was also a guitar ensemble featuring Inverness County musicians Brian Doyle, Tess Doyle, Bobby Peters, and Derrick Cameron. Cameron shared some thoughts into the creative endeavor.
“This was an amazing piece of work. I have never been involved with anything like this before. I found the process of learning our guitar parts in DADGAD tuning and then hearing how these guitar arrangements fit into the larger picture to be very interesting. I enjoyed it and I’m honoured that Scott asked me to be one of the musicians,” Cameron said.
We’koqma’qewska’q drummer Charlotte Poulette reflected: “I was honoured to be invited to be part of the Woodland Revival. It allowed us to send a reminder that future generations will be inheriting the land. The forest chant tells us that what we’re doing now is destructive to the efforts of the Woodland Revival. Thank you, Scott Macmillan and Jennyfer Brickenden for allowing our voices to relay this message.”
“What I heard were the awesome and frightening sounds of woodland destruction, followed by what came across as a funeral march, but concluded with the hopeful sounds of revival. Through all of this the We’koqma’qewiska drummers reminded us of that woodland destruction is an onslaught on our Mother Earth. What could have been a musical cacophony became a beautiful symphony that left me breathless with worry, hope, and admiration,” Pieter de Vries of East Lake Ainslie told The Oran.
“I know I was not the only one in the audience who was moved to tears by this astounding performance. We are truly blessed to have this kind of event here at ICCA. Once again, Inverness County is punching way above its weight, thanks to the talent and dedication of folks like Jennyfer and Scott, and Elizabeth at ICCA,” said Charlotte Miller of Mabou Harbour.
Thursday’s performance of the Blue Engine String Quartet was described by one concert-goer as “breathtaking, awesome, stunning.” With a repertoire featuring some of the best classical music to be offered, the quartet was joined by Macmillan and was much appreciated by an audience here that rarely gets an opportunity locally to hear and experience classical music.
Friday’s concert featuring the classical poetry of Rumi, in verse and song by Gaelic bard Lewis MacKinnon, and was another treat for the local audience. It was accompanied by the group of Persian musicians.
Sunday night’s concert featured the trio of Scott MacMillan, Brian Doyle, and Jamie Gatti in an ‘off the cuff” and ‘all-terrain’ musical presentation. Their performance was interspersed with readings from the Shean Writers and Poets Group (featuring Anne Levesque, Eileen Rickard, Trena Christie- MacEachern, and Andrea Currie), which echoed the nature theme of the festival.
Sunday evening, painter Ken Lywood also shared his talents envisioning on canvas the forests that so inspire.
It was quite an experience seeing everyone so moved by such an impressive array of events and the way in which such a diverse group of musicians seamlessly worked together throughout the Woodland Revival piece.
A forest-themed show of visual art continues this month at the Arts Centre in conjunction with this festival.
“I echo everyone else I’ve spoken with in hoping that I and many others hope that more people will have the opportunity to experience this concert and we will have a chance to experience this musical event again,” Charlotte Miller concluded.