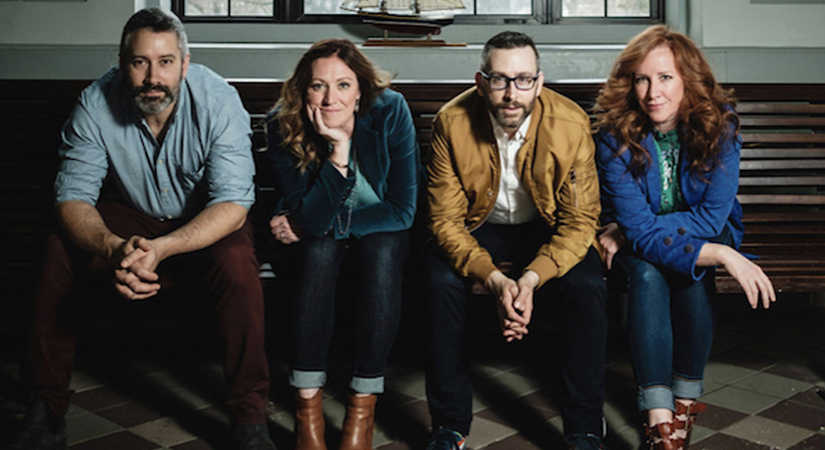 More than 20 years ago, six dynamic solo performers came together to jam at a late-night session during the Celtic Colours International Music Festival… and as legend has it, this session was the spark that created Beòlach.
Two albums followed (Beòlach, 2001 and Variations, 2004) with countless miles of touring and memorable live performances but as with all good things, while they might not come to an end, life does take its twists and turns and Beòlach has really been on the back burner until recently.
All the musicians of Beòlach have continued their musical paths in one way or another, but this year, 15 years after their last album, they are back together with original members Mairi Rankin, Mac Morin, and Wendy MacIsaac and joined by the latest addition to the group – piper Matt MacIsaac.
Reuniting with a new recording in hand called All Hands, Beòlach is ready to thrill audiences once again with plenty of new material.
The Oran was fortunate to reach pianist Mac Morin this week to discuss the new recording.
“The group was never really apart, but I started getting busier with Natalie MacMaster and Wendy had a family and Mairi got busy with another band, so there were a lot of reasons why things began to simmer. Of course, Ryan (MacNeil) having a young family and Pat (Gillis) lending his talents to other areas. In recent conversations with Dawn Beaton at Celtic Colours, she was asking if the band would ever consider doing an artist in residence role. Once that became clear and Matt decided to come on full-time, we began thinking it was 15 years since our last CD and we felt that we should do a recording that reflected the group as it is now,” said Morin.
Morin says the group is grateful for all the time and effort that Mike Shepherd at Lakewind Sound Studios put into the project.
The album opens with the amazing keyboard work that Morin has become known for as he has long been one of the most sought-after pianists in the Celtic music community. The second cut includes a stunning tune composed by Howie MacDonald and Brenda Stubbert called Kilts on Fire. Veronica’s is the third cut on the CD and it is a beautiful composition from Mairi Rankin and Matt MacIsaac.
The CD is also a real tribute to the talents of Cape Breton composers of recent times and long ago. There are cuts from the prolific John MacDougall as well as notable tunes by Kinnon Beaton and Allan MacDonald of Scotland.
“We were really fortunate getting some of John (MacDougall’s) tunes on there and Ian MacDougall being so kind, wanting to get some of John’s music out. There are some really incredible melodies in some of John’s tunes and of course some Kinnon tunes which are always great,” said Mac.
The CD also pays tribute to former members Patrick Gillis and Ryan MacNeil.
“There were a couple of arrangements on this CD from when they were in the band and we felt it was important to recognize that,” said Morin.
We started recording the record in December of last year, then we were preparing for Celtic Colours.  Then we did the Rejigged Festival before heading to Oregon earlier this month to perform. During the summer we were in Scotland and on the west coast. We’re hoping to keep it going in a more visible way, but of course we have a lot of schedules to work in. We really enjoyed doing this although it is a lot of work. You manage expectations but you never know, are they your expectations or are they others expectations? You’re trying to play to your biggest critic which turns out often to be yourself. We’re certainly thankful for the roots that we have here in Cape Breton and with the other members of the band that we spent the most time with because we still draw from that,’ said Morin.
Morin also noted the support from families has been so important over the years.
“The album is dedicated to Marty and Harry Lyttle of Maine. Marty got sick this past year and just passed away from cancer. We were able to get her a digital copy of the album before she passed away. They were just incredible support to us over the years,” Morin noted.
Guest musicians on All Hands include Gordie Sampson and Patrick Gillis. The project is supported by funding from The Atlantic Canada Opportunities Agency through the Cape Breton Music Industry Cooperative.
Keep an eye out for All Hands where music is sold locally or visit www.beolach.ca.