Gone but not forgotten: The Oyster House of Iron Mines 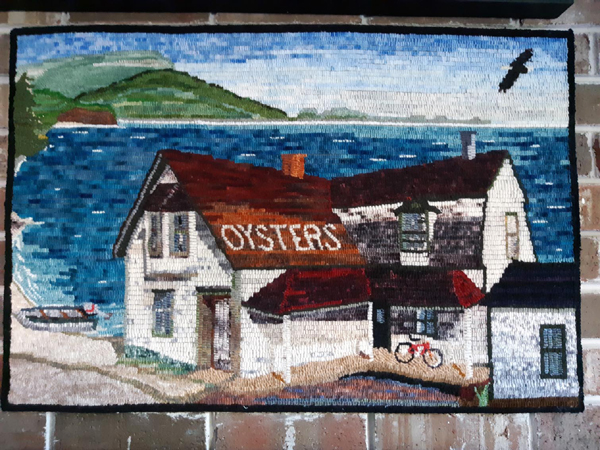 This hooked rug titled The Oyster House was designed and hooked by Alan Dorey. It was completed in February 2020 and measures 28” x 20” and is made with wool strips #3, 4, and 5 on Scottish Linen.

It stood on the high water mark of the Bras d’Or Lake, near Whycocomagh, a local historic landmark known as The Oyster House.
Bringing the memory of this local landmark back to mind is Janet and Alan Dorey, who reside in Windsor, but who also have a cottage in Orangedale.
The couple very recently reached out to The Oran to talk about Joe Hochheimer and his famous oyster house.
The Oyster House was a landmark in Iron Mines for many decades. Countless folks knew it as the halfway point between the Causeway at Port Hastings and Baddeck, an “almost home” marker.
Others knew it as the home of Hochheimer, his wife, Margot, and their 11 children.
“As a local fisherman, Joe sold fresh oysters from his home,” said Alan Dorey.
“Hundreds of people stopped to take photos of the house, myself included,” he added.
In February of this year, Alan Dorey completed a four-square-foot hooked rug of the Oyster House in winter.
“In my search for information about the house, I contacted one of the sons who told me the original house was built in the mid 1800s,” said Alan.
When Alan had completed the rug, he had asked around about Joe and found out that he and his wife were both in their late 80s and still living in the area.
So, the Doreys decided to take the rug to Hochheimers so they could see it in person.
“Joe is quite a character – witty and spry,” said Janet Dorey, after having visited the Hochheimers.
Speaking with Joe Hochheimer by telephone, he said that he was thrilled to see it and that he hadn’t seen anything like it in his lifetime.
Joe Hochheimer moved to the area in 1952, when he was 22 years old.
When asked about his livelihood he said that it was mainly oysters, but that he fished basically anything he could fish from the lake.
He operated The Oyster House for 25 years.
When asked what became of the hooked rug, Alan Dorey said that he couldn’t part with his artistic creation. It was however, submitted it to “Art Hits the Walls,” an online rug display.
Like so many celebrated landmarks, the house is now gone but is certainly not for