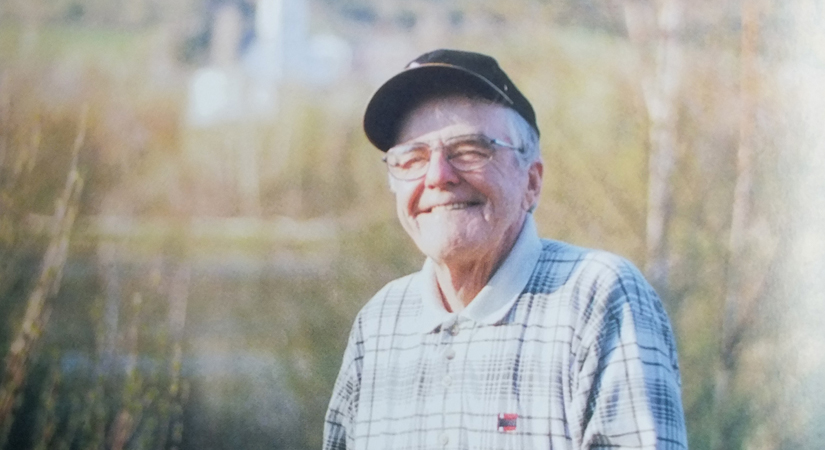 Cape Breton is mourning the loss of three of its great senior fiddlers in the past few weeks – Buddy MacMaster, Francis “Rory Sis” MacDonald, and Willie Kennedy. Willie Kennedy passed away at the age of 89 last week.

Willie Kennedy reflected on his musical roots in his autobiographical notes to his 2000 Rounder Records recording Cape Breton Violin on the North American Traditions Series.

“I was born on the fifteenth of August in the year of 1925. My father played fiddle and his name was Danny Michael Kennedy. My mother was Euphemia MacLellan from Margaree Harbour before she married him and her uncle was Ronald Kennedy who was a well known fiddler in those days. So I guess I inherit music from both sides of my family,” Willie noted. Willie’s uncle Joe was also a fiddler and a composer.

Willie’s dad and fiddler Morgan MacQuarrie’s dad, Jack MacQuarrie, often played fiddle together as Willie and Morgan would later do as well.

Willie learned a lot of tunes from his father and his uncle Ronald, and at the age of six or eight he started fiddling – first on a toy tin fiddle he received for a gift and then later on his father’s fiddle. Later, he started sharing the dance stage with various fiddlers. Willie credited Sandy MacLean for being an early influence on his traditional style of playing.

When he was fifteen, Willie had the opportunity to play fiddle along with Angus Allan Gillis.

“Malcolm MacQuarrie asked if I’d like to play with Angus Allan for the dances. I was pretty proud of myself to be able to play with a top notcher, eh? And I got ten dollars a night. Wow, that was really something then. It’s hard to think what you’d have to pay to mean the same to a kid nowadays? So I played a whole year with Angus Allan and he was such a gentleman,” Willie remembered. More opportunities to play dances followed.

“I played mostly at school dances. We’d go in the back of a big truck – there weren’t many cars then. Sometimes I’d play with John Alex MacLellan and Jack ‘Malcolm’ Gillis, and we’d get $5.00 each for the whole night! When I was between twenty and twenty-five years old, I was pretty busy playing near home. Around 1967, I moved to Mabou and during the last few years I’ve been playing quite a bit at weddings, concerts and parties,” Willie once noted in an interview with Allister MacGillivray for The Cape Breton Fiddler book.

In Mabou, Kennedy came into his own as a fiddler playing often with fellow fiddlers such as Fr. Francis Cameron, Kenneth Joseph MacDonald, Flora Catherine MacNeil, Sandy Cameron, Gregory Campbell, Fr. Angus Morris, and later a whole new younger generation of fiddlers such as his neighbours, Mairi Rankin, Rodney MacDonald, and Allan and Stuart Cameron.

Willie was a true gentleman as anyone who knew him would confirm. He was generous with his gift and his talent. Willie was known for his “old time” fiddling style; a style he noted that often included grace notes and “tic tac toes”.

“I seem to have the old stuff in me so deep! I can’t grasp the new tunes as easily,” he once told Allister MacGillivray.

Willie was also proud that he owned one of Dan R. MacDonald’s fiddles and he made the most of it, playing many of Dan R.’s tunes in his own repertoire.

Isabel MacDonald, wife of the late Kenneth Joseph MacDonald has many fond memories of Willie.

“He was the finest neighbour and he was such great friends with Kenneth Joseph and they played so often together that those who were organizing concerts often said if you get one you’ll get the other. He was also a great carpenter and such a generous soul,” said MacDonald.

Isabel remembered that one of the last times Willie played was this past spring for Sally “Central” Beaton’s 98th birthday party. He suffered some ill health after that and died last week in Inverness Hospital.

Mabou fiddler Bonnie Jean MacDonald says Kennedy was a major influence on her playing during her formative years.

“I heard him a lot at house parties and he was very supportive of the younger players in the area. I was always so impressed that he learned by ear and that his playing was so correct. He knew so many older tunes, but he kept up with the newer tunes as well,” said MacDonald.

Stanley MacNeil of Mabou has fond memories of playing at the Mini-Manor in Inverness for some 14 years on Thursday afternoons with Willie and a number of other regulars that included Sandra Gillis and Tyson Chen. Stanley said Willie was also a good step dancer.

Fiddler Morgan MacQuarrie, now living in Detroit, recalls learning many tunes from Willie as a teenager in Kenloch where they were neighbours.

“Willie was about twenty years older than me and we spent a lot of time together. I didn’t have a lot of friends my age and I enjoyed hanging out with the older people anyway. Willie’s place would be my first stop on my way home from Michigan and from there we’d often hook up with Malcolm Murray and Dan R. MacDonald; quite often we’d end up at a music session at The Rankins on Back Street. We’d be there with Buddy and Kaye and John Morris who at that time back in the seventies could barely reach the pedals on the piano. They were good times,” MacQuarrie told The Oran this week.

Willie shared another interesting true story that reflected his outlook and personality in his autobiographical notes. The story concerned a former priest in Mabou who was certainly not fond of fiddle music.

“Way back before I was born there was the old priest, smashing or burning all the fiddles in Mabou. There were musicians back then who’d give him a poor fiddle to smash and keep a better fiddle hidden. Eventually the Cape Bretoners got wiser and stood up for themselves. But what’s the harm in violin music, you know? I’ve heard some say, ‘I don’t want to go to heaven unless there’s music there’ and I guess I about agree with that, eh?”