Friends United carves out a new home for BC trees 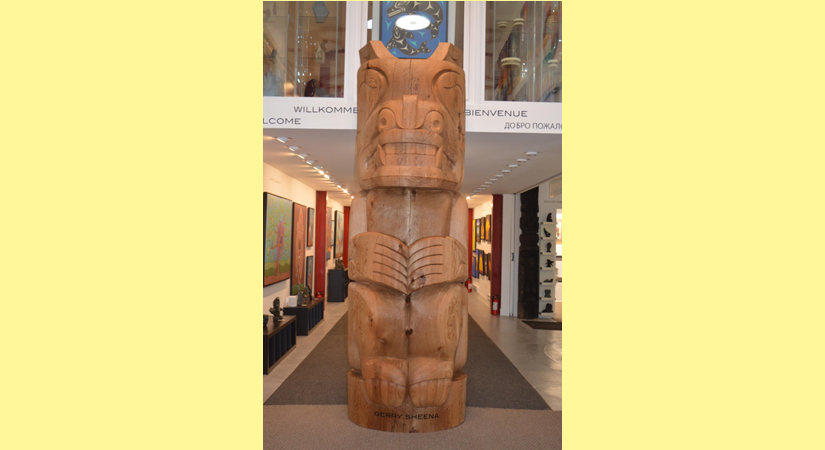 At the entry way of the Friends United International Convention Centre stands this totem pole carved by First Nations artist Gerry Sheena. The white cedar trees were shipped from British Columbia and now add even more to an already robust collection of native artwork from all across Canada.

They were born and raised on the west coast, but have found their forever home here in Nova Scotia.
The Friends United Cultural Centre is a unique and spiritual place determined to highlight the incredible talents of First Nations visual artists and collaborations between non-native and native artists as well.
The Friends United project was designed and created to honour First Nations people – it is the brainchild of German real estate mogul, entrepreneur, art dealer, and publisher, Rolf Bouman.
The story of the desire for totems came from Bouman and carver Gerry Sheena, a First Nations artist and wood carver.

Initially, said Bouman, there were two very large trees in Malagawatch that were on property owned by Bouman. They were very near utility poles and needed to come down.
For a wood carver like Sheena, however, he was looking for “real trees” – you know the massive behemoths one would find in British Columbia.
Bouman inquired, “What do you mean ‘real trees?’ There are plenty of real trees in Nova Scotia.”
“The ones from Malagawatch were about 150 years old,” said Bouman.
This was all taking place just before the COVID-19 pandemic descended upon the world.
Never one to shy away from a challenge, Bouman sourced out seven White Cedar trees that had been cut and were on their way to a lumberyard in Surrey, BC.
“It would be a seven-day trip for the trees to get here,” said Bouman.
However, the trees are 40 feet long and five feet wide and weigh between six to eight tonnes, therefore only two would fit on a transport truck. And it was about $30,000 to have them driven to Nova Scotia from BC.
Totem poles are predominantly created by Northwest Coast Indigenous peoples. They tend to showcase a Nation’s, family’s, or individual’s history and displays their rights to certain territories, songs, dances, and other aspects of their culture. They can also be used as memorials and to tell stories.
About Gerry Sheena: He was born on April 13th, 1964, in Merritt, BC, and is a member of the Coast Salish Nation.
Sheena has been carving since 1990.
“While growing up, he spent hours watching his brother Roger Swaikum carving, and though he is mainly self-taught, Gerry has received some guidance from Henry McKay, and renowned Kwakwaka’wakw artist Stan Hunt III. Hunt in particular assisted Sheena in refining his detailing, which is reflected by the superb finish of his current pieces.” (From Canadian Indigenous Art website)
Sheena attended the Emily Carr School for two years and Langara Community College for one year, where his studies focussed on the Fine Arts.
His private work can be found throughout galleries in BC as well as the Museum of Anthropology at the University of British Columbia.
His carving style is traditionally Salish, informed by modern painting techniques and innovative use of colour and design.
Bouman created a woodworking shop for Sheena and inside there are sections of the White Cedar (and smell that is so lovely and intoxicating to the senses).
Being with the trees one could feel how ancient they were.
The Friends United International Convention Centre is a must-see experience. It is more than 20,000 feet in size and is the largest of its kind in Canada.
It was constructed by the Bouman Group of companies for the purposes of honouring all Indigenous North American Peoples to celebrate their culture and heritage.
It features collections of paintings, totem poles, carvings, Inuit stone sculptures, quill baskets, and many other First Nations cultural items of significance.
Check out www.friends-united.ca, book a time, and go see this incredible facility for yourself.