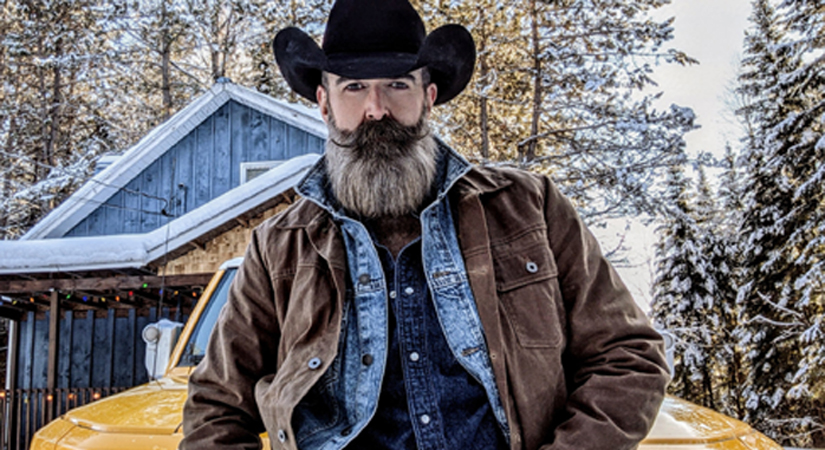 “Unmistakably country, but with a certain sonic majesty...he sings with open-throated confidence and clear conviction. A winner.” – Robert K. Oermann, Music Row Magazine, Nashville TN.
Country singer Drake Jensen has been busy over the past decade bridging what he perceives as a gap between country music and the LGBTQ+ community and he having remarkable success in this area.
The Glace Bay native was on the local music scene for years before he left Cape Breton for Moncton, Ottawa, and Nashville, places where he has lived since. It appears that leaving Cape Breton for this country singer was something that only helped his career as Jensen has been receiving a lot of radio play in countries such as Australia where some 255 stations have picked up his songs on a regular basis over the past decade.

“I’m actually a household name there,” he told The Oran on Friday.
Now living in rural Quebec, Jensen, like many performers during the pandemic has been coping with the fact that many opportunities have dried up over the past year.
That hasn’t dampened Jensen’s spirits though. It’s given him the time and opportunity to concentrate on creating videos and doing some new recording.
The Oran heard this week from Erinn Fraser of Inverness County, a friend of Drake’s, that he is busy getting ready for the May 5th official release of a new country music video of fellow Cape Bretoner Leon Dubinsky’s signature song, Rise Again.
“I wanted to do something for the LGBTQ+ community. When I was growing up in Cape Breton there was really no support for us in this community and it was very difficult. I left school at age 14 because of it and the suicide rates for people in this community are much higher than in other populations,” Jensen told The Oran in a conversation last Friday.
Another project that Jensen is deep into is something inspired by a train trip across Canada. During that trip he had been asked to perform some Canadian folk and country classics as well as original material and he and friend and guitarist Jonathan Edwards had so much fun doing this they are now working on a recording of some of these Canadian classics by performers such as Lennie Gallant, Anne Murray, Gordon Lightfoot, Bruce Cockburn, Leonard Cohen, and Rita MacNeil. That album is expected to be released some time later this fall.
“I’d like to send a thank you out to Inez Edwards, Jonathan’s sister, who is a great photographer and she has helped me a lot with the photographs for the new video,” Drake added.
Jensen’s video music has also been receiving a terrific amount of play on YouTube where he has quite a following with songs such as Lennie Gallant’s Which Way Does the River Run and Pieces of You, Burn the Floor, and Stand By Your Man.
As for Rise Again, fans can purchase the song on Drake Jensen’s Bandcamp site and proceeds will go towards The Rural Communities Foundation of Nova Scotia (RCF).
“This is a community foundation that supports community organizations in rural Nova Scotia, through grant-making, convening and capacity-building. It has a proven track record, with more than 15 years of developing and delivering small grant programs. It has dedicated board members from all regions of the province who have a wealth of experience about community development in rural Nova Scotia and it is a registered charity that adheres to the highest standards of transparency and accountability in its financial management. It is a member of the Community Foundations of Canada Outline on the Soaring Eagle Fund: The purpose of the Soaring Eagle Fund is to ignite a conversation on challenges facing the LGBTQ+ community in Rural Nova Scotia and identifying and implementing solutions. ‘The fund will focus on these issues and unite the members of the LGBTQ+ community within Nova Scotia to resilience work led by others identifying with LGBTQ+ through conversation and projects within their communities. The initial emphasis of the fund will be on youth projects, but the emphasis is expected to expand in future years to highlight projects led by other groups. In addition to grants to qualified donees and often in partnership with community organizations, The Soaring Eagle fund, will encompass convening, capacity-building, outreach, and other activities which further its goals,” said Jensen.
Jensen has kept busy with four album releases to date over the past decade - On My Way to Finding You in 2011, OUTlaw in 2013, Retro in 2014 and Sideshow in 2018.
For more information on Drake Jensen and his music visit: www.drakejensen.ca.