The Soundtrack of Our Lives makes its debut this weekend 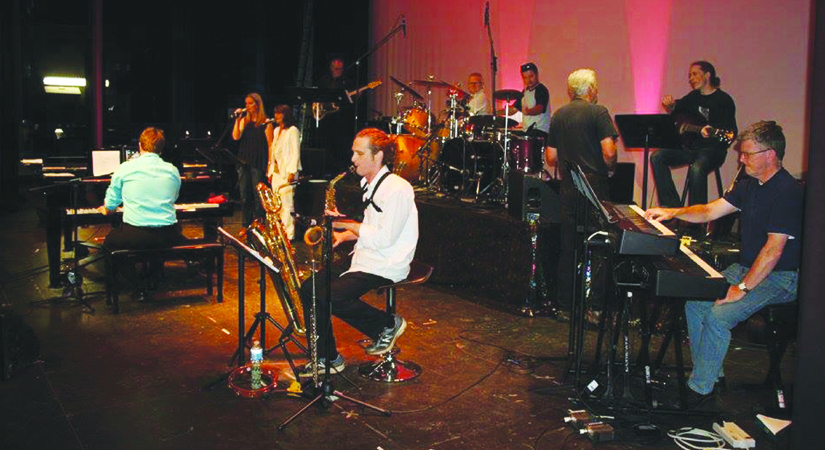 Boardwalk Productions in rehearal for The Soundtrack of Our Lives

-by April MacDonald
When a group of lifelong legends celebrated their diamond jubilee, they travelled from near and far to be together to mark the event.
What was born from that all-nighter is a show that will hit audiences this weekend at the Inverness County Centre for the Arts.
The premise was that those who threw the party had asked their friends to submit three songs and then they had to explain what memories they associated with the songs they submitted.
“To my delight, everyone was so on board with this idea that is how The Soundtrack of Our Lives was born,” explained Edmund MacLean, the show’s director.
These songs were all compiled and put on a CD (remember those) by Bobby Tompkins and distributed to everyone in the group as a keepsake.
That keepsake has now grown legs and a voice and is hitting the limelight.
The brains behind this operation are none other than the folks who brought you Woodstock, Four Strong Winds, The Last Waltz, the Johnny Cash Show, Elton John, and Roy Orbison’s In Dreams – otherwise known as Boardwalk Productions.
The band is Brian Doyle, Neil MacQuarrie, Cameron MacQuarrie, Steve Hughes, Lawrence Cameron, and Mike Murdock.
The singers are Jeannie Beks, Jesse Ryan, Abby Mullendore, James Ryan, Barry Fougere, and Rory MacEachern.
The show is directed by Edmund MacLean, musical director is Brian Doyle, and artistic director/stage manager is Beth Ryan.
Sound is by David Rankin and the poster design was by Calum Ryan.
The show is on Friday and Saturday nights and there is also a Sunday matinee.
The show is done in two acts and there are nine musical numbers per act.
One gets to see and feel what it was like to grow up in Inverness in the 1960s and beyond. However, the show will appeal to all ages (19 and up) and especially to those who have friends, family, or are the grandchildren of those who grew up in Inverness.
“As an artistic director and an artist you can have self-doubt or allow your ego to get in the way when you go on these emotional journeys,” said MacLean.
MacLean said his fears were put at ease when he spoke to one of the show’s performers, Jesse Ryan.
“He told me, ‘Edmund, everyone has a story and yours is a unique one…so tell it!’,” said MacLean.
Edmund said that this show will take you to places like The Hoff, the parish hall, the Baltimore, and the Nova Café.
“Basically, where all the jukeboxes were,” laughed MacLean.
He said the common thread is that everyone leaves home, be it to university or away to work, back then it was to Boston, now it is to Western Canada, but we all call this place home and attach our memories to it.
This weekend, you will hear tunes from Van Morrison, The Rolling Stones, Bobby Vinton, Rod Stewart, and many more.
“This group is so talented that I would be proud to go on tour with them anywhere,” closed MacLean.
Tickets can be purchased online from the Inverness County Centre for the Arts at www.invernessarts.com/iccaevents and are $25 each.