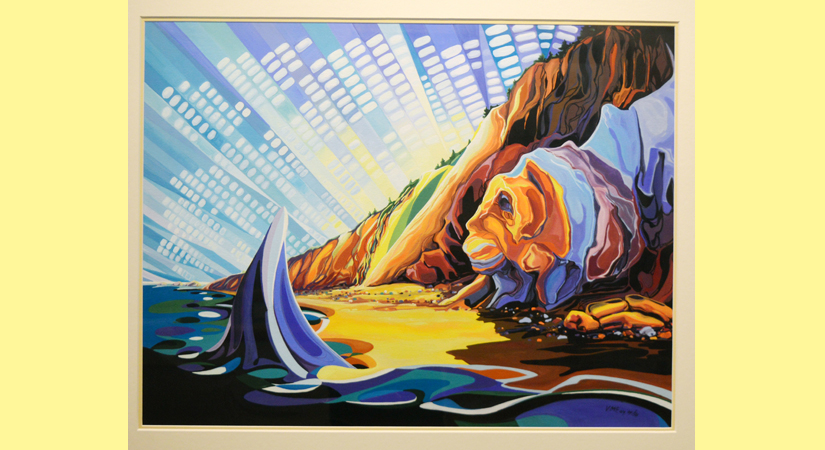 Melinda MacDonald of "Melinda by the Sea"

-by April MacDonald
Creignish artist Melinda MacDonald was celebrated last Thursday evening as she had her first solo exhibit.
She said that to calm her nerves she thought of picturing everyone in their underwear as people often suggest with public speaking.
“I’m picturing easels in front of you all,” she said.

She said that for her big debut that she figured she should “look the part” as an artist.
“I considered adding some pink streaks, or giant yellow glasses, but all I came up with was shorter bangs,” she laughed.
MacDonald began her art career in 2015 with the “paint night” style classes that everyone was putting on in private homes, which eventually moved out to bars and community halls.
“It was hugely successful and I became so busy I couldn’t keep up to the demand,” she said.
All the attention grew her social media accounts and not long after she began selling her original pieces.
Our youngest at that time said he used to get asked if he was Scott MacDonald’s son, now it’s if he’s Melinda by the Seas’ son!,” said MacDonald.
“By the Sea has become my last name,” she added.
It was around this time when she took an introductory to oil painting class with her now friend and mentor, Gillian MacCulloch.
“I had been looking for classes for years. I dabbled in painting but something was missing. With Gillian I learned the basics and I still take her class. But when I went to sign up she apologized and said the class was full. I knew there was no way I wasn’t getting in this class. A voice in my head said to keep her talking and it worked! From then, I never stopped painting,” she explained.
Now, she says, she is completely obsessed.
MacDonald started to sell more art, jewelry, prints, she built a website, and opened a seasonal artisan shop.
She said she also has some more exciting projects in the works on the horizon.
“The paintings in this exhibit are made up of a few mediums, mostly acrylic, one oil, and a handful of cold wax and oil pieces,” said MacDonald.
She explained that cold wax and oil is an exciting medium to work with.
“It allows me to create heavily textured paintings. They are mostly created with a silicone bowl scraper, no brushes and if you look closely you’ll see the imprint of the mesh from the onion bag or garlic bag, lines drawn with wooden skewers and basically anything I find around the house that looks like it would make an interesting mark,” she explained.
MacDonald added that she has started to use this approach with her acrylic paintings, using some of the same tools and painting in a more intuitive, expressive way.
“Gillian used to tell me to slow down, but I used to say if I slow down, I’ll think too much, and thinking ruins my painting,” said MacDonald.
After years of practice, she said she finally realized that intuition comes from an abundance of practice.
“It makes it easier to create this way once you have a good foundation in colour mixing and composition and I needed to slow down in the beginning so I can paint in this style now. Thanks Gill,” she closed,
The J. Franklin Wright Art Gallery presents Hip to be Square by Melinda MacDonald. The opening of the exhibit was held on Thursday, April 7th at 7:00 p.m.
Melinda MacDonald is a full-time artist and seasonal artisan shop owner in Creignish. Inspired by the epic views of the sea, sky, and fields around her home on their historic property over looking St. George’s Bay, her vibrant oil, acrylic and cold wax paintings capture the energy and beauty of her surroundings.
Working by instinct, she is motivated by energy and emotion, accessing these invisible forces and making them tangible to others.