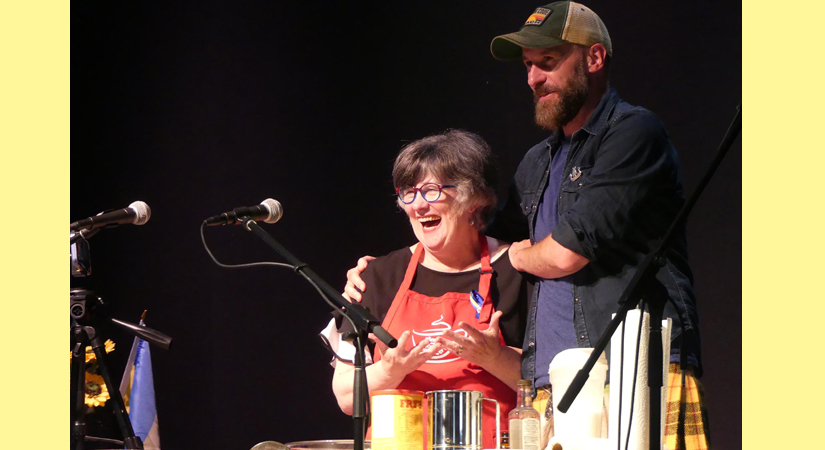 Mary Janet MacDonald was joined on stage by Scottish online baker, the Hebridean Baker, during her live show on Sunday at the Port Hawkesbury Civic Centre.

-by Brad Chandler
After weeks of preparation and planning, the Strait2Ukraine community group welcomed a jam-packed room of local music fans and baking enthusiasts for an afternoon fundraiser at the Port Hawkesbury Civic Centre.
The event, which was headlined by a live performance from Mary Janet MacDonald and her ever popular online cooking show Tunes and Wooden Spoons raised over $10,000 to support Ukrainian residents who have moved from their home country to Nova Scotia.

The group who hosted the event, Strait2Ukraine, is a community group from the Strait area dedicated to helping families who are fleeing war in Ukraine.
Sunday’s event saw MacDonald put together a classic cookie recipe and was joined by a number of local musicians who performed throughout the afternoon.
ECMA award-winning fiddler Morgan Toney, St. Peters singer-songwriter Myles Davidson, and guitar player James MacLean.
Money raised from the event will be used to ease the Ukrainian refugees’ transition from the ongoing violence and uncertainty in Ukraine into their new homes in our province.
During the event, Mykola Kushnir, a Ukrainian-born business owner in St. Peters, who has been helping Ukrainian immigrants settle into their new homes after arriving in communities in the area, spoke about the strong level of     support the community of Port Hawkesbury has shown.
“Our goal is to help Ukrainian newcomers to integrate smoothly into communities by providing them with different resources, especially labour so they have money to pay their living costs. We would like to help them and welcome them in any possible way that we can. Thank you so much to Strait2Ukraine, YMCA in Port Hawkesbury and Port Hawkesbury Paper for giving us as much support as they can,” he said.
Kushnir currently employs seven Ukrainians who have recently arrived in Cape Breton with his Cape Breton forestry company.
Event emcee, Bob MacEachern, said during Sunday’s show that “nothing identifies a community better than when a group of good hearts get together for someone else. With no personal agenda and no gain. With the overarching need to do something to help Ukrainians who are relocating here to our province…so much support has been shown by the Strait2Ukraine committee,” he said.
Mary Janet MacDonald was joined by a special guest on stage when a Scottish online baker known as the Hebridean Baker visited to give her a hand on stage to the delight of audience.
He had just flown in from Scotland through destination Cape Breton and had made his first stop at Sunday’s event. He currently has over 250,000 followers on TikTok, where he does a similar baking show to MacDonald for his fans.
MacDonald and the Hebridean Baker formed an all-star tag team of home bakers during Monday’s episode of Tunes and Wooden Spoons live from MacDonald’s kitchen in Port Hood.