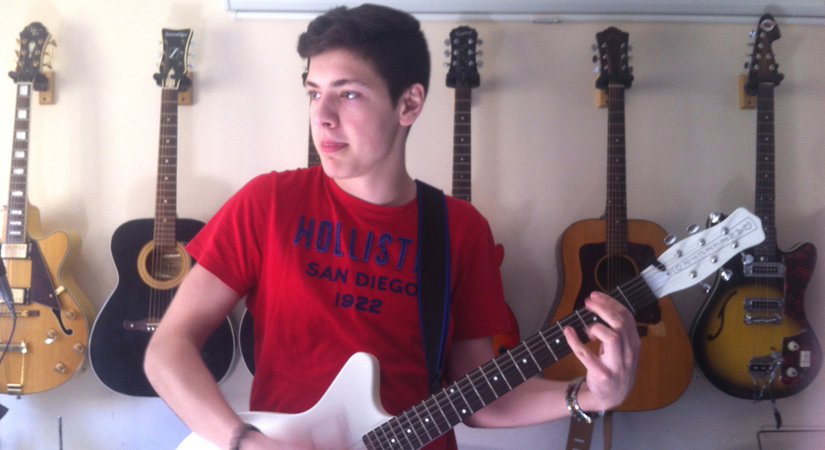 The wealth of musical talent in Inverness County was evident again recently when a young man from Inverness was named the winner in the Atlantic Canada under 19 guitar competition. The event was held during the East Coast Guitar Festival from Friday, April 24th through Sunday, April 26th at Cunard Centre in Halifax.

The winner, Mitchell Poirier, was still 14 at the time of the competition but recently turned 15. Mitch is the son of Mark and Janice Poirier of Inverness and he faced off against eight other young talented guitarists aged 14 to 19 in the Halifax competition.

Mitch performed on acoustic guitar, the only one in the competition not playing electric, and he chose Calum Graham’s composition Phoenix Rising to play for the judges.

A friend of the family recently heard guitarist Calum Graham live in concert and heard him perform Phoenix Rising and recognized it from Mitchell’s playing. She spoke to Calum about it and he was interested and excited to hear that Mitchell won the guitar competition playing his piece. Calum contacted Mitchell by social media and had this to say once he watched Mitchell’s video on YouTube: “Great job Mitch! I only wish I could play that good when I was 14. Play on brother.”

Judges for the guitar competition were Don and Jimi, guitarists for Billy Cox Band (bassist for Jimi Hendrix) and Tom Bedell from Q104 FM.

According to the organizers of the show, the nine talented young guitarists “put on an amazing show and brought the fire! The judges were blown away by the talent but there could only be one winner.”

In winning the competition Mitchell also received an $850 guitar package from D'Addario which included a Danelectro guitar.

Mitchell first took up the guitar following the interests of his brother Jeff and later he was influenced by guitarists such as Graham, Andy McKee and Don Ross. Mitchell has had the opportunity to attend workshops with Don Ross and J.P. Cormier but he remains primarily self-taught. Over the years in Inverness he says he’s been fortunate to have Neil MacQuarrie as a music teacher in the school who has always encouraged the youth.

In addition, Mitchell had the opportunity to attend a house concert at Codapop Studios with fellow Inverness County rockers, The Town Heroes. Mike and Bruce gave Mitch a shout out and a tour of the recording studio where they are working on their new album. Mitchell has also been invited by the Town Heroes to open their concert on June 18th at 7:30 p.m. at Strathspey Place in Mabou.

“I expect to perform three numbers to open the concert,” Mitchell told The Oran this week.

You can watch Mitch perform Phoenix Rising at the following link: https://www.youtube.com/watch?v=OnneOVdtlq8.