Jr. B Pirates put the Scotians on the shelf in sweep 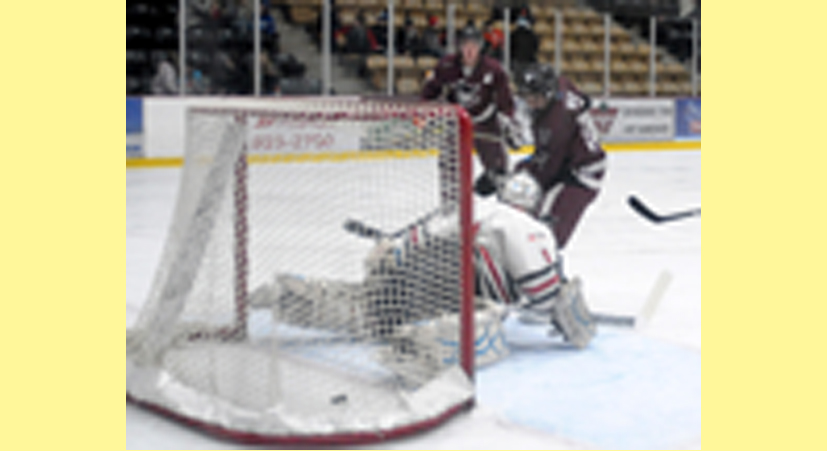 Sebastian Vella, of the Strait Pirates finishes off a nice pass from Randon MacKinnon (back), scoring five-hole on Pictou County goalie Matt Murray on Friday.

A home-and-home series with the Pictou County Scotians was thought to be a good test for a Strait Pirates team on a nine-game winning streak in the Nova Scotia Junior Hockey League.
In the end, the Pirates made it look easy as they swept the Scotians 9-1 in Port Hawkesbury on Friday and 4-1 in Trenton on Sunday, extending their streak to 11.
In Friday’s game, the Pirates scored three times in each period, all even-strength goals. Their four goals in Trenton were also all five-on-five.
Pirates captain Matthew Morgan said their powerplay is something the team is working on, but there is no sense of urgency.
“Right now, nobody can touch us five-on-five. Pictou is in second place and they had all their main guys tonight,” said Morgan.
“But there’s no question we have to get our powerplay going. It’s something we’re working on and when playoffs come you have to score with the man advantage.”
The Pirates started Friday’s game with five defenceman, missing Liam MacKinnon who is out with the flu. That number was cut to four when Christian Papineau was ejected for fighting at the start of the second period.
But the Pirates didn’t skip a beat, limiting the Scotians to 32 shots on Cody Smith and firing 47 of their own on Pictou’s Matthew Murray.
As well, the defensive corps continued to add to the offence, with Morgan adding a goal and an assist and Callum Jordan putting up three assists.
The Pirates started their top line of Taylor Pierce, Branden Dauphinee, and Josh Foster and the trio wasted no time in scoring 26 seconds after the drop of the puck. Dauphinee was the marksman, one-timing a pass from Taylor behind the Pictou net.
Randon MacKinnon, who had two goals and an assist on the night, scored the eventual game-winner at 5:54 of the first. Josh MacMillan forced a turnover at the Pictou bench and MacKinnon one-timed his cross-ice pass for the score.
Jacob Keagan showed his speed in scoring the Pirates’ third goal, winning a race along the boards and attempting to pass to his winger. The puck was tipped by a Pictou defender and Keagan caught up to the errant pass and laced a shot home from almost behind the goal line.
In the second frame, Sebastian Vella scored on a nice set-up by MacKinnon; Foster roofed one; and Pierce, with a nice deke through the crease, scored with 36 seconds left in the period to make it 6-0.
MacKinnon made it 7-0 in the third; Olan Spears one-timed a centering pass from Ryan Bakker; and Morgan scored on a point shot through traffic to round out the Pirates scoring.
Pictou’s Jeremy MacFarlane scored midway through the third to spoil Smith’s shutout bid.
Friday midnight was also the league’s deadline for teams to submit a roster pared down to 25 players. What is historically a nervous time for players, is a little less so for the high-flying Pirates.
“We have the team,” said Morgan. “Everybody on this team is contributing and we don’t really need to add anyone. We have a core group of older players and a group of young players who have really bought in to the system.”
While Friday’s game was relatively quiet in the penalty department, Sunday’s 4-1 win came with 169 minutes called, with Pictou taking 96 of them.
When hockey was being played, MacMillan, Pierce, and Bryce Reynolds each scored in the first period for a 3-0 lead after 20 minutes.
Papineau made it 4-0 before Pictou scored on a powerplay to make it 4-1.
Shots were 39-38 in favour of the Scotians, with  Cody Smith recording his 12th win of the season.
Both Smith and Peter Kopf are leading all NSJHL goaltenders in goals-against average and save percentage.
Kopf, who is 4-1 this year, has a GAA of 1.74. Smith, who has 774 minutes in goal, has a GAA of 1.78.
As for save percentage, Smith is lights out at .942. Kopf, who was in goal for the team’s only shutout, is at .933.
The Pirates have just two games left this month before the Christmas break. They are at home to the Eskasoni Eagles this Friday, 7:30 p.m., at the Port Hawkesbury Civic Centre. On Saturday they are off to Liverpool for a game against the Privateers.