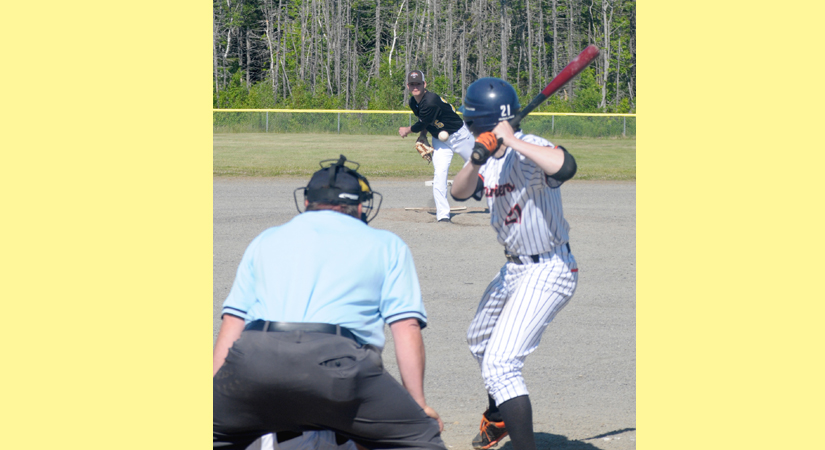 Lefthander Kenzie MacPhail pitched a complete game 6-5 win for Inverness over Isle Madame on Sunday, along with hitting the game-winning RBI single in the bottom of the seventh inning.

The Inverness Athletics pulled off a win in Sunday’s home-opener that puts the Toronto Blue Jays to shame.
The A’s played the Isle Madame Mariners in a Richmond Amateur Baseball Association doubleheader at the Ned MacDonald Memorial ball field.
And they were in a jam.
Having lost the first game 17-8, the A’s sent lefthander Kenzie MacPhail to the mound in game two.
MacPhail was down 1-0 early, but by the third inning he was pitching a gem with a 3-2 lead. That lead held until the top of the seventh when it slipped away on some hard-hit balls that gave Isle Madame a 5-3 lead.

With the top of their order coming up in the bottom of the seventh, the A’s went to work.
Leading off, Jonathan Gosbee hit a ball deep to left to leg out a double.
Corbin Beaton walked to put the potential tying run on base.
Mark Copley represented the winning run when he came to the plate and he didn’t disappoint, lashing a two-run triple deep to right to tie the game 5-5.
Still with no outs and Copley on third, MacPhail took a couple of pitches before driving a shot over the head of the Mariners’ shortstop for the 6-5 victory.
MacPhail was in the clean-up spot after a change in the lineup removed the designated hitter position and he was feeling the pressure of being in a position to help his own cause.
“It was tough giving up those runs in the seventh, but I knew we still had a chance with the top of our order coming up. Gosbee got the double, Corbin got on, and then our captain came up clutch,” he said.
“It was all kind of there for me, but I was nervous stepping up to the plate. I took those couple of pitches to settle in, then got my hands around on a fastball and luckily it got out of the infield.
“It’s a team game and a great feeling to win it like that,” MacPhail said.
The top of the A’s order was also on their game in the bottom of the third when Inverness took the 3-2 lead.
Gosbee, who probably gets plunked more often than any other player in the RABA, was hit by a pitch with one out. He stole second and went to third after Beaton reached on an error.
With Copley at bat, Gosbee scored on a passed ball before the A’s coach delivered an RBI single to score Beaton. A veteran run-producer, Copley had six RBIs over the two games.
Damian MacInnis, who is back with Inverness after Port Hawkesbury took a leave of absence this season, drove in Copley with a single for the three-run inning.
The first game was one of those “one bad inning” games, in which Isle Madame scored eight runs in the fifth to put the game out of reach, despite Inverness coming back with four runs in the bottom of the fifth.
Gosbee and MacPhail each crossed the plate twice. Runs were also scored by Copley, Beaton, Iain Stewart, and Ali Delaney.
Copley had three singles in the game and drove in three runs. Sandy Sofan had a pair of base hits.
Stewart was tagged with the loss and Gosbee closed out the game on the mound.
The Inverness A’s have no games scheduled this weekend and are in Petit de Grat on July 20 for two games against the Red Caps.
The A’s are owed a number of games at home by teams that have cancelled on them. Two home games, in which the Red Caps were supposed to come to Inverness, were won by forfeit.
Not counting the games that are to be rescheduled, the A’s next scheduled home games are on Aug. 3, when the Little Anse Hawks are in town.