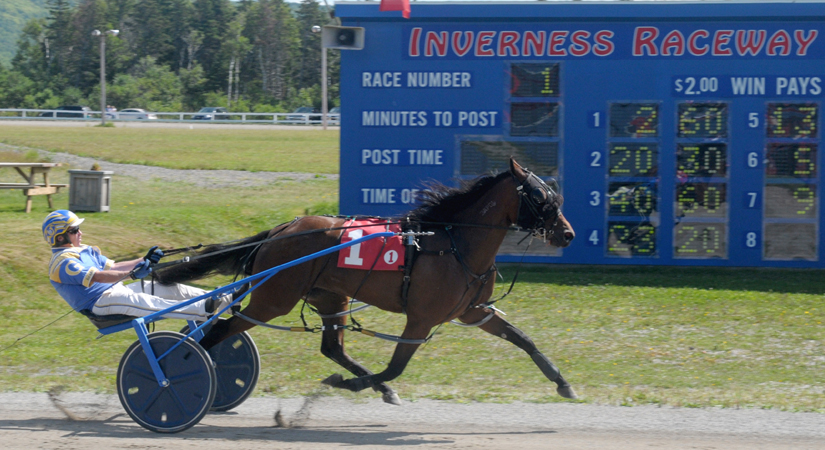 Sadiemaesonherway came back to Inverness from the Atlantic Sires Stakes tour for two-year-old fillies to win her first race lifetime with a 2:03.3 mile for driver Rodney Gillis and owner Wayne MacLellan of Mabou. Gillis had a driving hat trick on Wednesday and again on Sunday.

When you’re hot, you’re hot.
Hawthorne driver Rodney Gillis held the hot reins on some hot horses last week at Inverness Raceway, picking up three wins and a third on Wednesday and three wins and two seconds on Sunday.
Gillis is the main driver for owner-trainer D.F. Beaton, of Port Hood, who returned to Inverness with his four pacers and a trotter on Wednesday night after taking a two-week break from the local track to race at Truro and Charlottetown.
His return was dramatic as Gillis drove three of his horses to wins in consecutive races.
In race seven, Gillis drove Docs Ronhenry to a mile in 1:59.4. Race eight went in 1:59.3 with Gillis winning by a length with five-year-old Chase N Madi.
Beaton had his other two pacers entered in the ninth, where Gillis, aboard Your Raider Boy, out-dueled Clare MacDonald on REs Aiden for the win in 1:58.3.
Wednesday’s card also included three Atlantic Sires Stakes races for two- and three-year-old trotters.
Three-year-old Thelastonestanding, owned by Beaton and Donald MacEachern, of Upper Margaree, came in as the favourite, but ran into a few walls for driver Brian MacPhee and finished fourth.
Another trotter with an Inverness County connection, Arnold Rankin’s two-year-old Mabou Ridge, took the winner’s share of a $15,120 purse with Clare MacDonald guiding the young gelding to a mile in 2:04.1.
In Wednesday’s feature race, five horses finished under two minutes, with Lewis MacDonell taking first place with Windmeredontmatter, pacing in 1:59.1 for owners Alex Sutherland and Malcolm MacEachen.
Gillis continued his driving clinic on Sunday, opening the card by putting a maiden mark 2:03.3 on Wayne MacLellan’s two-year-old filly Sadiemaesonherway. It was her first win in seven starts, including four Atlantic Sires Stakes races.
Gillis had another catch drive in race three, where he made Western Bandit a winner for the second time this year with a mile in 2:01.3 for owner Anthony Beaton.
He completed the hat trick in race four with another win with Chase N Madi, shaving a second off Wednesday’s time in a 1:58.2 mile.
Sunday’s feature race saw the return of Kayla and Walter Walker’s Euchred to the Inverness oval since October of 2017 and he didn’t disappoint. With Mark Pezzarello on the reins, the seven-year-old sensation cruised comfortably to a win in 1:56.2 and now has lifetime earnings of $123,429.