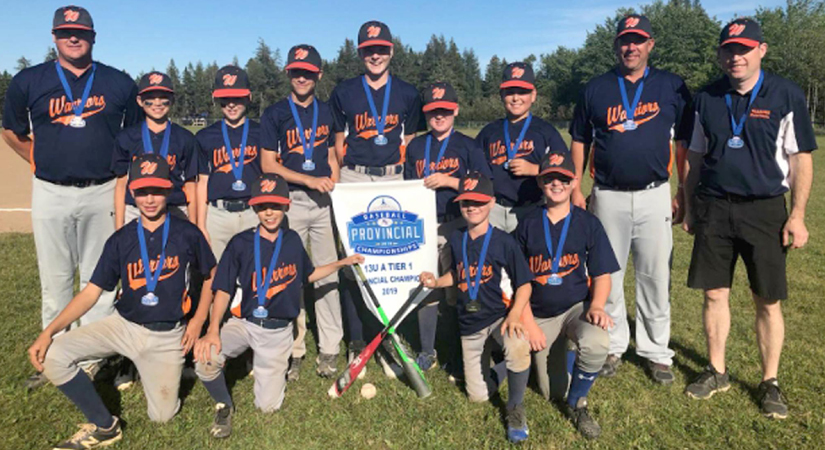 Good coaching, good pitching, good scorekeeping, and an all-out effort from everyone on the team powered the Cape Breton West Warriors to their first provincial baseball title.
The Warriors, who had two of their veteran pitchers saved for Sunday, got a three-hit shutout from Luke MacEachern in the crossover game and six solid innings from Keiran Madden in the championship game to defeat the Hants North Blue Jays 15-4 to win the Under-13 Tier 1 A Nova Scotia championship.
Hosted by Hants North and played at the North Noel Road field, the Warriors were at the top of their game on the weekend.
“What an awesome weekend – we’re celebrating,” said Cape Breton West coach Brent MacEachern.
“I had a pretty good feeling going in that if we executed the way we can, it would work out for us. All our pitchers were great this weekend and it was a very strong performance by all the kids. They deserve all the credit.”
The Warriors opened the tournament Friday with a “very tough” game against the Yarmouth Mariners, coming out on top 9-8.
“It was a good, hard-fought game,” said MacEachern. “We were up on them a couple of times, but they were sticky and kept clawing back.”
Luke MacEachern and Madden each took the mound in the win, with the coaches holding them to 45 pitches each so that they would be eligible to pitch on Sunday after one-day’s rest.
Owen Heukshorst, with a double and single, and Lance Heukshorst, with two base hits, each crossed the plate twice.
Both Ben MacDonald and Landon Fraser walked and tripled, scoring a run each.
Luke MacEachern and Kenny Gillis each hit a double while Jesse Gillis and Madden notched base hits.
In the first game Saturday, the Warriors struggled at the plate and dropped a 6-2 decision to the Blue Jays.
Jesse Gillis singled and tripled and scored a run. Fraser had the other run on a pair of singles.
The loss made game three a must-win against the Dartmouth Arrows, who had won their first two games.
Cape Breton West led 9-0 after three innings then overcame some questionable coaching antics by Dartmouth to win 10-8.
At one point, when a ball thrown back to the pitcher went astray and was picked up by an infielder to be thrown back to the pitcher, the Dartmouth coach came running out of the dugout to argue that the player who touched the ball now had to pitch.
“That took 10 minutes to sort out, with the umps correctly ruling that the player would also have had to touch the pitching rubber.”
After that, the game was halted for 30 more minutes when it was discovered that Dartmouth had some lineup discrepancies.
“They had an incorrect lineup and had players in the game who were not on their lineup card. It was really sharp on Mark (coach MacIntyre) to pick that up.”
Ben MacDonald led the Warriors offence with three hits and three runs scored.
Campbell MacIntyre walked and tripled for two runs scored while Owen Heukshorst also scored twice on a pair of walks.
Jesse Gillis had a pair of base hits and a run scored, while Luke MacEachern and Carson MacEachern each crossed the plate.
Cape Breton West was still not out of the woods with the win, as now Hants North, Dartmouth, and the Warriors all had 2-1 records after round-robin play. But after the tiebreaker formula was applied (defensive runs against divided by defensive innings), the Blue Jays were first, Cape Breton West was second, and Dartmouth went home.
Finishing second in their division meant the Warriors would play the Weymouth Firebirds, who finished 3-0 in the other division. That didn’t matter a bit to Luke MacEachern, who pitched a  three-hit shutout as Cape Breton West slugged their way to an 11-0 win in five innings.
The Warriors scored at least a run in every inning.
MacDonald led off with a double, added a single in the second inning, and scored twice. MacIntyre also doubled, singled, and scored a pair of runs.
Jesse Gillis tripled and reached on third-strike passed ball to score twice.
Single runs were scored by Luke MacEachern, Carson MacEachern, Lance Heukshorst, Kenny Gillis, and Keiran Madden.
Hants North won their crossover game, setting up a championship game with a large, hometown crowd cheering for the Blue Jays.
But if Madden was hearing it, he didn’t let it bother him as he pitched the Warriors to a 15-4 win and a provincial banner. He had six strikeouts and scattered four walks and five hits in six innings of work.
Jesse Gillis closed out the seventh with a three-up, three-down inning that included a strikeout.
Cape Breton West scored five runs in the third and fourth innings to crack the game open.
Owen Heukshorst was four-for-four with two doubles and four runs scored to lead the Warriors.
Jesse Gillis scored three runs on three singles, while Lance Heukshorst, Landon Fraser, and Campbell MacIntyre all had a three-hit game.
“Hants North played really well and were maybe feeling the pressure of the boisterous crowd,” said MacEachern. “I love going there, it’s a great community, well organized, and the people are friendly, even while cheering on their team.”
MacEachern said they hope to get the boys together for one last celebration before they’re all in the rinks playing hockey.
He said he hopes that baseball will continue to be a part of their lives in the summer.
“Mark, Christian (Heukshorst), and I want to play with them through all the divisions right up to adult,” he said, knowing the tough years are ahead when summer jobs become a thing. “But that’s the goal right now.”