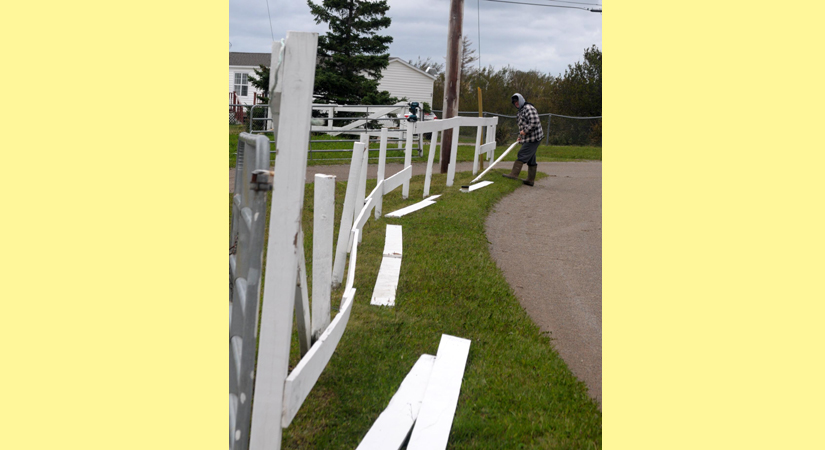 Inverness Raceway suffered some minor damages at the height of the storm Saturday night, with fence rails getting torn off, the one-eighth marker poles falling down, ceiling tiles above the grandstand seats ripped out, and the new grandstand at the barns was turned sideways. Here track maintenance supervisor Richie Mullins starts the job of fixing the fence on Sunday morning.

After a successful bid to change Sunday afternoon’s race date to Monday evening in advance of hurricane Dorian, Inverness Raceway lost the race against time for the power to be restored.
With five stakes races on the 12-dash card, the cancellation probably cost the raceway a handle in excess of $10,000.
In a press release issued by the Atlantic Standardbred Breeders Association, the three-year-old colts were scheduled to race at Northside Downs on Saturday, September 7. However, due to the forecast of hurricane Dorian, the decision was made to have Inverness host the A-Division races with their card for Sunday, Sept. 8, as Inverness was hosting the Atlantic Sires Stakes for two-year-old colts.
With the storm hitting the Atlantic provinces, Inverness made the decision to move their card of racing to Monday, Sept. 9.  The storm created a lot of power outages for the Atlantic provinces and there was much damage to many areas.
As of Monday morning, Inverness still did not have power and the estimated time for restoration was Wednesday, Sept. 11.
Due to no power, Inverness cancelled their card of racing for Monday.
After careful consideration, and exhausting all dates and efforts, the ASBA has made the decision to pay out the ASBA contribution for 2-year-old colts and 3-year-old colts’ races. This amount will be divided equally among the horses entered to race.
The points for the A-Divisions for both the 2- and 3-year-old colts will also be divided equally among the horses that were entered to race.
Inverness Raceway will not benefit from the loss of the stakes races, which are over now until the Breeders Stakes finale takes place in Charlottetown on Oct. 12 and 13.
However, Inverness Raceway still has at least six cards of racing left in the season and a regular card of racing is on tap for this Sunday, with post time at 1:30 p.m.
The following are the results of last Wednesday’s races: