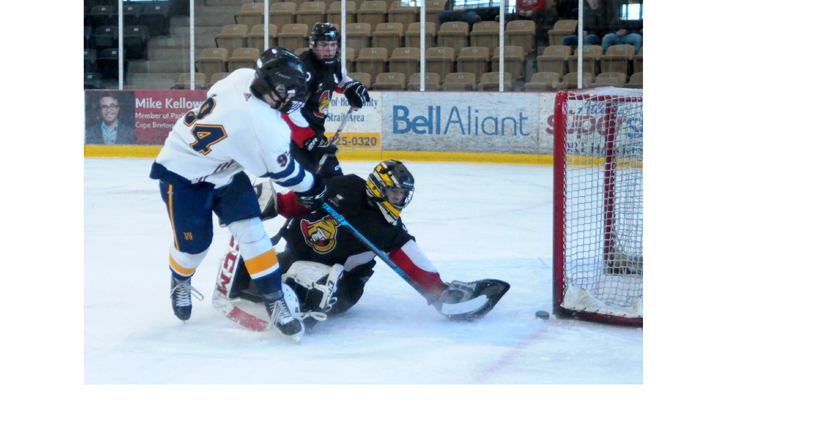 Inverness goaltender Dominic Keigan came out to challenge Dalbrae’s Matt Ellis, but the league MVP still managed to slip the puck past the post and into the net in Sunday’s regional semifinal game.

In a tournament filled with lopsided scores, the Dalbrae Dragons and SAERC Saints put together an exciting championship game in Sunday’s final of the NSSAF Highland Region Division 2 boys’ hockey tournament.
Played over four days at the Port Hawkesbury Civic Centre, the two elite teams played to a 4-4 tie after two periods.
But midway through the third frame, Dalbrae’s depth proved deadly with three unanswered goals for a 7-4 win.
“That late goal was kind of a dagger,” said Dalbrae coach Ardell Hawley, referring to Brady White’s goal with seven seconds left in the second period to tie it.
“We knew the momentum had shifted and it felt like we were losing. If we could get 10 minutes of 0-0 hockey, we knew we had the high-end skill to win it and it came through in the third.”
It came through at 7:31 of the third when Jayden Muise put one past SAERC goaltender Chase MacPherson on a backhander passing through the crease. It was Muise’s third goal of the game and came with Matt Ellis down on the ice after a crushing hit into the corner boards. Thinking a penalty was coming, a SAERC defender touched the puck but the play continued on the no-call and the puck was in the net.
Ellis recovered and four minutes later, kicking his insane speed into gear, beat the Saints’ defence to the net, slipping the puck between MacPherson’s pad and the post for his third goal of the game to make it 6-4 at 11:35.
And at 13:45, Colin Van Zutphen completed a picture-perfect passing play at the net with Joshua Smith to score a powerplay goal for the 7-4 final.
“I was impressed by the fight SAERC showed tonight, they had us running around in our own zone at times,” said Hawley. “But this group is incredible – they’re here to win.”
“It was a team effort for sure,” said Dalbrae captain Griffin Spears. “Matt and Jayden had a helluva game and if it wasn’t for Kyle Aylward (in goal) we wouldn’t have won that game.”
The win sends Dalbrae directly to the Division 2 provincial tournament, hosted by Eastern Shore High School in Musquodoboit Harbour Mar. 6-8.
Spears said the Dragons’ tournament experience, including the Red Cup and a mainland tournament at Christmas, will help them. “We showed a few teams we can play at the Division 1 level.”
The Saints still have an opportunity to advance to provincials through a qualifier against East Hants, though details of when or where the game will be played have not been announced.
“We’re looking forward to that game,” said SAERC coach Stan MacNeil. “We were right with Dalbrae tonight. Our powerplay was good and both teams were forcing turnovers, unfortunately their’s went into the net.”
SAERC opened the scoring at 3:32 of the first period with a powerplay goal. Ethan Donaldson came down low from the point to rip a shot past Aylward.
The Dragons tied it at 6:56 with a powerplay goal of their own with Muise scoring on a point shot on a play with Luke Gould and Spears creating a screen in front of MacPherson.
And similar to what happened to Dalbrae at the end of the second, the Dragons did it to the Saints with Ellis scoring a shorthanded goal with six seconds left in the first period to take a 2-1 lead.
Ellis made it 3-1 at 4:35 after Muise sprung him loose for a rush down the left wing.
Shamus Beaton drew the Saints to within one goal at 6:37 following a nice play by White to keep the puck onside.
But a killer shot by Muise that sent MacPherson’s water bottle flying made it 4-2 for Dalbrae.
There was no quit in the Saints, however. Braden Kelly scored with the man advantage on a nice passing play with Brady MacNeil and Beaton. And White tied it with seven seconds on the clock.
Dalbrae advanced to the final with a 9-0 win over the Inverness/Baddeck Rebels in the first semifinal.
The host Saints defeated the Richmond Hurricane 3-0 in the second semifinal.
The Cape Breton West High School Hockey League also presented its league awards during the tournament.
Ellis was named the league’s most valuable player and received the top scorer’s award with 21 goals and 17 assists for 38 points in 15 games.
The top goaltender award was won by MacPherson. He played all 15 games for SAERC, winning 13 – four by shutout – and maintaining a stellar 1.71 goals-against average.
Top defenceman was Richmond’s Xavier Sampson and most sportsmanlike player was Lauren MacDonnell of Inverness.
The first-team all-stars are: forwards Matt Ellis, Dalbrae; Griffin Spears, Dalbrae; Trent Diggdon, Richmond; defencemen Jayden Muise, Dalbrae; Keegan Freimanis, Dalbrae; goaltender Chase MacPherson.
The second-team all-stars are: forwards Marcellus Francis, Eskasoni; Michael Cameron, Inverness; Brady White, SAERC; defencemen Cole Stevens, Eskasoni; Xavier Sampson, Richmond; goaltender Luke Sampson, Richmond.
Results of the round-robin are as follows:
Dalbrae 14 (Matt Ellis, 4; Keith MacDonell and Luke Gould, 2 each; Colin Van Zutphen, Luke Van Zutphen, Nolan Beaton, Jayden Muise, Griffin Spears, Ryan MacLean) Inverness 2 (Michael Cameron, Michael Smith).
SAERC 7 (Brady White, 2; Andrew MacNeil, Harrison MacFadyen, Brady MacNeil, Ethan Donaldson, Shamus Beaton) Richmond 0 (Chase MacPherson shutout).
SAERC 8 (Andrew MacNeil, 3; MacFadyen, 2; Braden Kelly, Mike MacLean, Ben Breen) Eskasoni 0 (MacPherson shutout).
Richmond 4 (Isaac MacDonald, Mack Martell, Cooper Fraser, Brayden Marchand) Inverness 3 (Blake MacDonnell, Cole Mullins, Smith).
Dalbrae 12 (Spears and MacDonell, 3 each; Muise, 2; Ellis, Angus MacDonald, Gould, Luke Van Zutphen) Eskasoni 1 (Ahynss Denny).
Richmond 4 (Trent Diggdon, 3; Logan Cotton) Eskasoni 1 (Shawn Young).
Dalbrae 5 (MacDonell, Gould, Spears, Ellis, Muise) Richmond 2 (Danny McNamara, Marchand).
Dalbrae 6 (Ellis, 2; Luke Van Zutphen, Ben Scott, MacDonald, Spears) SAERC 4 (Donaldson, 2; Kelly, MacFadyen).