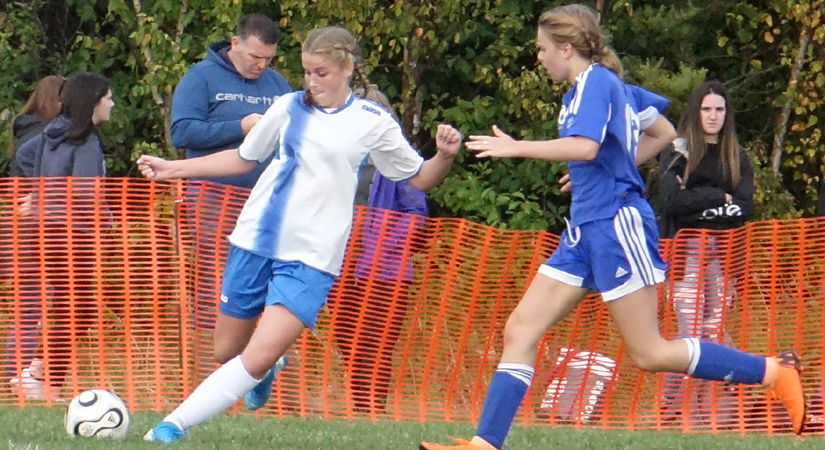 Huskies striker Courtney Aucoin gets a centering pass away ahead of a blocking attempt by Claire LeBlanc of the NDA Aigles during last Wednesday’s high school soccer game in Terre Noire.

It’s a short season and only one of the five teams in the girls division of the West Island High School Soccer League will get to go to provincials, making the goal for every team to get into game shape quickly and score some goals.
The Cape Breton Highlands Huskies did just that last Wednesday, coming out of the gate hard to overrun the NDA Aigles 12-1 on the Terre Noire field.
Mackenzie Roach marked her return to CBHA with a goal at the five-minute mark, tapping a pass from Kalyn IngrahamPhillips past NDA keeper Shelby Deveau.
Five minutes later, Maddie Gale took a pass up the middle for a breakaway and fired a shot off the fingertips of Deveau.
The Aigles got into the game in the 14th minute when Léarose Aucoin dribbled the ball past a Huskies defender for a hard shot at the top of the 18-yard box past Huskies keeper Lynn MacKinnon.
But that was all the offence NDA would offer as the Huskies built a 7-1 lead at the half and added five more in the second frame.
Ava Ross led the Huskies with four goals. Roach ended up with a hat trick and Macayla Jenkins scored twice. Gale, IngrahamPhillips, and Courtney Aucoin added single markers.
MacKinnon played until the 56th minute when Laura Morrison came in for some time in the keeper’s position.
Kali Chiasson, one of five grade 12s on the team, has played on three provincial championship teams. Last year, the Huskies had to settle for silver in a 1-0 loss to Annapolis West in Oxford.
“That was a tough game and it could have went either way, but we were proud of that silver because we tried our best,” said Chiasson.
“We’re really excited for this season. We lost nine players from last year, but we have a strong group and we’ve been training hard. It’s just a matter of getting it all together in this short season.”
Unlike previous years when qualifiers would follow the regional final, only the Highland Region champion will advance to provincials. Semifinals are scheduled for October 28 and the Highland Region championship will be played at the field of the highest seed on October 31.
League play resumes today (Wednesday) with Baddeck at NDA and Rankin at Beau-Port. The Huskies travel to Arichat on Saturday for a game against Beau-Port.
Girls games scheduled for  Sunday include Beau-Port at Baddeck and NDA at Rankin.