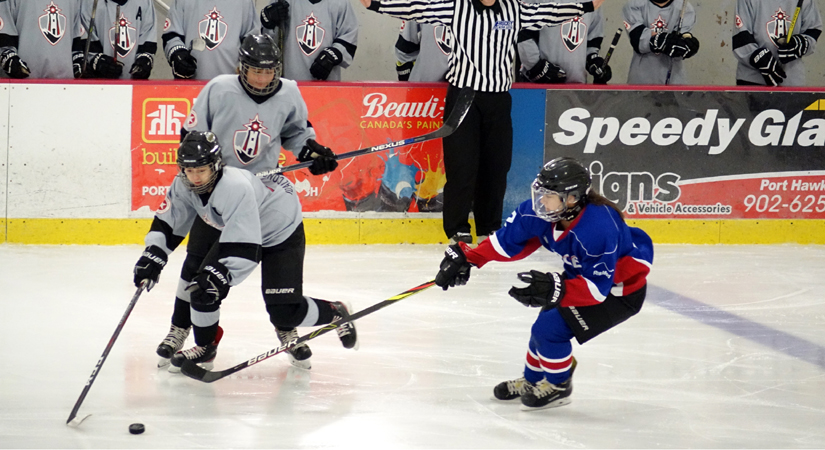 Quad County Islanders forward Maggie Broussard strips the puck from a Metro West player in front of her bench during Saturday’s U18 AA Female game in Port Hood.

Solid goaltending, sound defence, and goals when needed all added up to a win by the Quad Counties U18 AA Female Islanders in their first game of the regular season.
The Nova Scotia U18 AA Female Hockey League kicked off at the Al MacInnis Sports Centre on Saturday, with the Islanders defeating the Metro West Force Explosion 2-1.
It was third time a charm for the Islanders powerplay in the first period, with Brooke MacLellan giving the Islanders a 1-0 lead, banging home a rebound on a point shot by Julia Mae MacDonald. Lily MacDonald also assisted on the goal.

The 1-0 lead held through a scoreless second period.
The Islanders had to kill their only penalty to start the third period, with Avery MacDonald holding the fort in goal.
Back to full strength, Sienna Beaton scored what would prove to be the game-winner at 5:52, on a play with Mary Beth Brophy and Maggie Broussard.
Metro West spoiled MacDonald’s shutout bid, scoring a breakaway goal at 11:29. A strong forecheck in the final minutes prevented the visitors from pulling their goaltender for an extra attacker.
“That was a very good, very tough start to the season,” said Islanders coach Darren MacDonald. “They are a good group of quality hockey players.”
MacDonald said 37 players tried out for the AA team, making for some tough decisions to pare it down to 17.
“There were some tough choices to make, but I think we got it right. The girls are showing their potential now. We’re starting to have success.”
The Islanders were 1-2-2 (won-lost-tied) in exhibition games before Saturday. MacDonald said they practising twice a week this season.
This weekend the Islanders are on the road, playing the Valley Wild on Saturday and the Metro East Inferno on Sunday.
The next home games are on Nov. 28 and 29 when they host the Metro West Force Royals in Port Hood on Saturday and in Antigonish on Sunday.