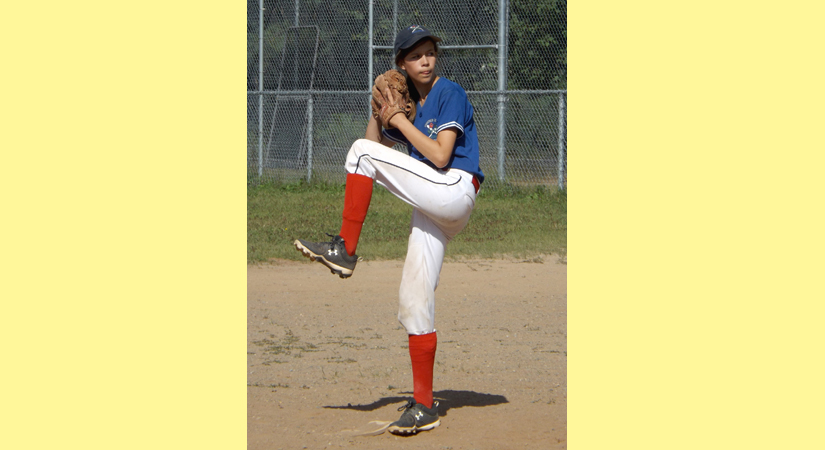 Elise Munro, of Mabou, was named to the Nova Scotia U14 Selects who will play for an Atlantic championship this weekend in Halifax.

Elise, who plays on a boys team, the U13 Port Hood Red Sox, and on a girls team, the U14 North Nova Highlanders in Antigonish, has been playing baseball since she was four years old.
She said making the provincial girls team was special.
“It feels really good, especially since most of the team are girls from Halifax,” she said while travelling to Antigonish on Monday.
Elise said she credits one particular inning that caught the eye of the provincial team coach.
“I was playing shortstop and made four diving catches. I’m a lot better at fielding than batting and I really like shortstop and can jump pretty high for line drives.”
Munro’s coach in Antigonish is Glenna Ingraham, formerly of Port Hood with roots in Margaree.
A baseball coach for 20 years, Ingraham started an all-girls team three years ago and for the first time ever, Baseball Nova Scotia held provincials for U14, which Antigonish hosted.
She said Munro making the Nova Scotia team was the result of more than just one inning.
“Elise has worked extremely hard the past couple years. She plays both on my team as well as being the only girl on a team based out of the Port Hood area. She is a team leader on my team and I would like to see her get some recognition for this huge accomplishment. As her coach, I am so proud of what she has accomplished and her teammates plan on cheering her on as she competes,” said Ingraham, noting that Elise is on the road for games and practices five to seven times a week.
“She’s a fabulous girl, the first from this area to play on a provincial team. She’s my top pitcher and plays the field extremely well. It’s quite an honour for her.”
Ingraham said the Highlanders won just one game at provincials, but it was how much the young team progressed that was important.
“At the start of the season, our first game was against a top team and we lost 15-3. At the end of the season we played them to a 9-9 tie,” she said.
“What I tell the girls is we’re here to have fun. If we win, that’s great, but let’s have fun while we’re learning.”
At the end of this season, the girls presented Ingraham with a ball on which the team wrote a few words about her.
“Elise wrote, ‘The best coach I ever had,’ and that meant so much to me.”
Elise said she’s looking forward to the Atlantic championship, which will be held this weekend, Sept. 10 and 11, in Halifax.
“I’m trying to improve my hitting, at the provincial level the pitches are much faster than what I’m used to seeing.”
Elise is the daughter of Shauna Barrington and Chad Munro. Good luck, Elise, this weekend and in all your endeavours!