Judique’s Reid MacDonald will play for an Atlantic baseball title 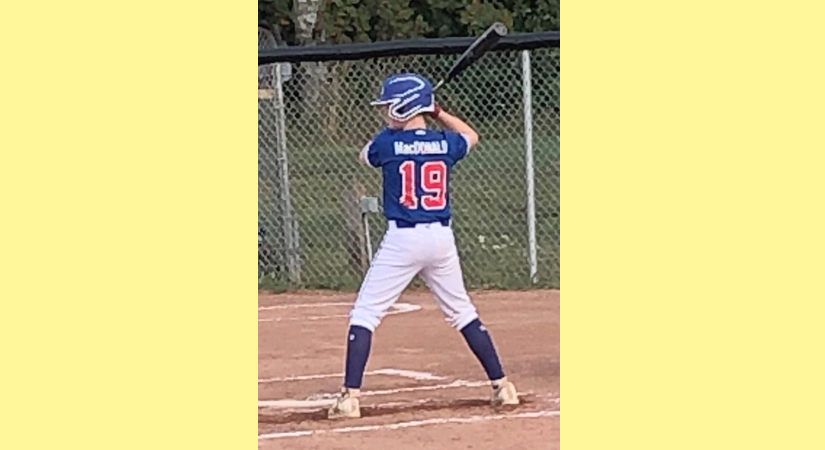 Along with being a pitcher, Judique’s Reid MacDonald is a starting catcher and outfielder. He will represent Nova Scotia at the U13 AAA Atlantic baseball championship in St. John’s, NL, this weekend.

-by Bill Dunphy
The apple, and the baseball, doesn’t fall far from the tree.
Reid MacDonald is having an outstanding year playing baseball and it’s not over yet.
The 12-year-old son of Dayna and Sheldon MacDonald, of Judique, was selected to the U13 provincial team in June, won the Atlantic Baseball Challenge in P.E.I. in August, and was picked up by the U13 AAA Bluenose League champion Dartmouth  Arrows to play in the Atlantic championship this weekend in St. John’s, NL – and all of that while playing with the Truro Bearcats for the past three seasons in the Bluenose League.
“Before school started I was going to Dartmouth every Tuesday and Saturday for practice. I think we have a pretty good shot at it this weekend,” Reid said.
Reid, like his father, is primarily a pitcher, but is also a starting catcher and plays the outfield.
“I’ve been playing baseball since I was four and began pitching about five years ago. I have a four-seam fastball, a circle change-up, and a curve.”
This season Baseball Nova Scotia was able to hold U13 provincial team tryouts in early June and Reid was one of 14 players to make the team – one of just three Cape Breton boys (Jack Bona from Louisdale and Brody Walker from Glace Bay).
Under normal circumstances the team would have attended the U13 national championship in Woodstock, Ontario, in August but due to ongoing restrictions across the country Baseball Canada cancelled all national championships again this year. The team practised twice a week and held a three-game series of nine-inning games versus Team P.E.I. in July, with P.E.I. winning the series 2-1.
Even though there was no national tournament, Baseball Canada held an Atlantic Baseball Challenge for the U13s on Aug. 27-29 in P.E.I. Normally all four Atlantic provinces would be represented but due to COVID restrictions, only Nova Scotia and the host team played.
Team Nova Scotia took home the trophy going 4-0 on the weekend.
Some highlights for Reid on the weekend included:
Game 1: NS 4 - P.E.I. 3, Reid was the starting catcher and went one-for-three at the plate with a run scored and a bases loaded single to bring in the game winning run.
Game 2: N.S. 8 - P.E.I. 6, Reid was in the bullpen for this one and came in the bottom of the fifth with the bases loaded and two outs and a 6-6 tie. He got a strikeout to end the inning and threw 2 1/3 innings of shutout ball to earn the win.
Game 3: N.S. 4 - P.E.I. 3, Reid started the game in left field and was 0-for-2 with a walk and run scored.
Game 4: N.S. 12 - P.E.I. 11, Reid was in the bullpen again for this one and came in to start the fifth inning with P.E.I. holding a 9-8 lead. He held them to two runs over three innings and Team NS was able to walk it off in the seventh to earn him his second win of the weekend.
Reid was scheduled to attend the Cooperstown Dreams Park tournament in Cooperstown, New York, this past August with the AC Braves Baseball Club, which is a team composed of players from Atlantic Canada.
This week-long tournament is held every year for 12-year-olds and features upwards of 1,000 teams over the summer from all over the U.S. and Canada. Players such as Mike Trout, Bryce Harper, and Gerrit Cole have played in this tournament in their youth. Unfortunately COVID and border restrictions forced the cancellation of the team attending.
When Reid is not playing, he can be found in the dugout for the Sydney Sooners or helping umpire his sisters U11 games in Port Hood.
His dad plays with the Sooners, who are about to begin a best-of-seven series with the Dartmouth Dry for the Nova Scotia Senior Baseball League championship.
Sheldon, who has also played with Port Hawkesbury in the Richmond Amateur Baseball Association, is a multiple Nova Scotia champion, won nationals with Halifax in 2004 and has won a national over-35 championship.
When asked who the better baseball player is in the family, Reid replied, “I’m not sure, but I enjoy watching my dad play quite a bit.”
Reid says he would like to thank his mom for all the coolers packed with food and drinks while on the road and for bringing her cow bells to EVERY game.
The Atlantic U13 championship in St. John’s this weekend also includes the provincial champs from New Brunswick, P.E.I., Newfoundland, and Labrador, plus the host team.