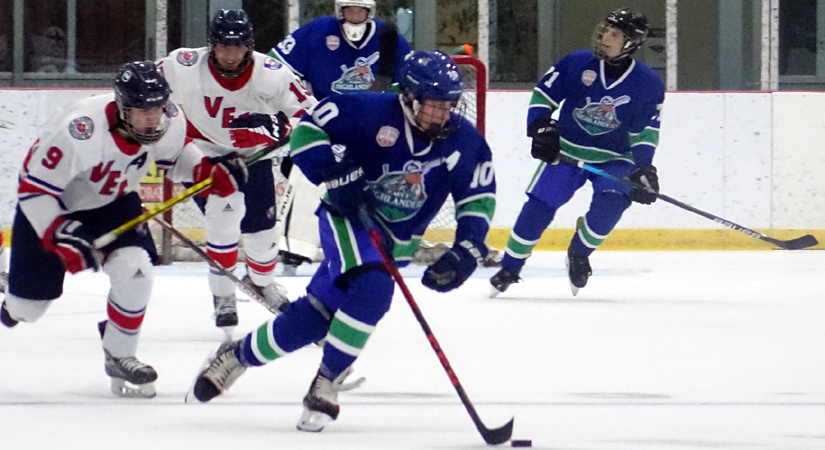 Brody MacPherson, of the Cabot Highlanders, leads a rush out of his own end during a 3-1 win over the Voyageurs on Saturday in Port Hawkesbury to start the Nova Scotia U16 AAA Hockey League season.

The Cabot Highlanders kicked off their 2021-22 campaign in the Nova Scotia U16 AAA Hockey League with a win and a loss at the Port Hawkesbury Civic Centre on the weekend.
The Highlanders turned in a strong performance on Saturday with goaltender Dan Morrison making 31 saves to win the season opener 3-1 in a two-game set with the Dartmouth Voyageurs.
On Sunday, Dartmouth came back from down 2-0 in the first to win 6-2.
“You want to start on a high note and we got that on Saturday,” said Highlanders coach Jesse MacLean. “There was a little bit of nerves in the first period. We have a lot of first-year players and some second-year guys playing different roles. But we got some timely scoring. We will want to tighten up on taking penalties, but it showed early on that we can kill penalties.”
Penalties also became an issue on Sunday.
“It was our first learning lesson of the season,” said MacLean. “We transitioned well from Saturday and came out flying. But then we got into penalty trouble and they outworked us.
“There’s going to be ups and there’s going to be downs in every game all season. It’s our job to keep them level in the middle. We will break down these games by watching video at our next practice. The best way to show them where they’re making mistakes and what they can do better is by watching video.”
In Saturday’s game the two teams played a scoreless first period with the Highlanders killing three minor penalties and getting outshot 11-5.
Nine minutes into the second period (U16 AAA games are 15-15-20 minute periods) and the Voyageurs finally capitalized on a powerplay to take a 1-0 lead.
The Highlanders got their own powerplay going three minutes later when captain Jonathan Dunphy, untouched outside the crease, tipped a point shot by Drew MacLean through the five-hole of Vees goaltender Drew Hutchison. Cory MacDougall also assisted on the goal.
Shots in the second tipped the Highlanders way 10-7.
At 1:42 of the third, play was stopped for several minutes after Dunphy was hit from behind into the boards behind the Dartmouth net, resulting in a five-minute major being assessed to Connor Stevenson.
Dunphy was helped to the bench and returned to the game later in the period.
Three minutes into the powerplay, MacDougall took a shot from the left wing and the glancing save went to MacLean pinching in on the right wing where he buried the puck on a quick release to score what would be the eventual winner.
MacDougall ended up with a hat trick of assists when he set up Dunphy with an insurance goal at 11:47. Luke MacPherson also picked up a helper.
The Voyageurs scored on a powerplay at 15:59 but the goal was waved off on a goaltender interference penalty.
Dartmouth, who had a 13-7 shot advantage in the frame, turned up the heat in the final minutes but Morrison was up to the task to preserve the 3-1 win.
Some of Saturday’s momentum carried over into the second game at noon on Sunday.
Dunphy scored on a powerplay at 3:17 of the first, with assists from Gavyn MacLellan and Blake MacDonnell.
And MacLean made it 2-0 with an even-strength goal at 11:30 on a play with Daniel Chiasson and Dunphy.
But that would be all she wrote for the Highlanders as the Voyageurs fought back to tie it 2-2 after two and then added four more unanswered goals in the third.
Rhyah Stewart had her first start in the Highlanders goal, facing 49 shots in the loss. She came out with three minutes left in the third for an extra attacker, but Dartmouth added an empty-net goal to make it 6-2.
The Highlanders and Vees join the Admirals in being three teams that split their weekend series.
Both the two New Brunswick entries in the league this year, the Moncton Thunderbirds and Saint John Knights started 2-0, as did the Fundy Thunder.
The Basin Armada, Valley Wildcats, Kings, and Cape Breton Jets were winless on the weekend.
The Highlanders will make their first foray into New Brunswick this weekend when they play Moncton in a two-game weekend series.
Cabot returns to the Port Hawkesbury Civic Centre on Oct. 2-3 when they host Saint John.