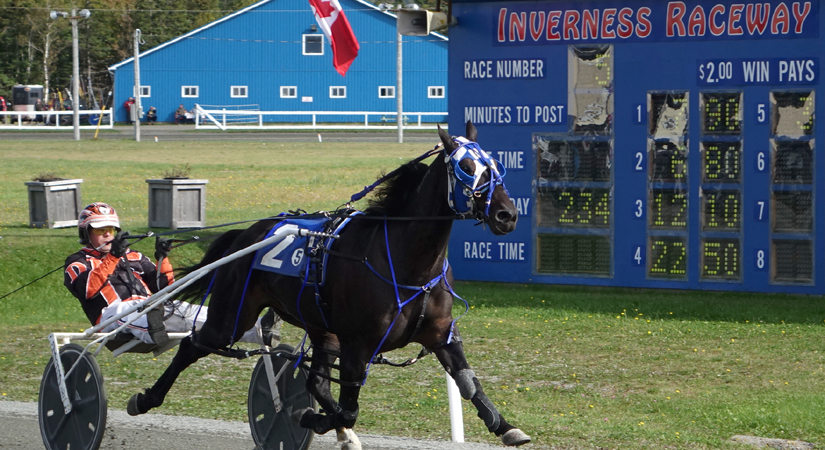 And with his third win on the day at Inverness Raceway on Sunday, Redmond Doucet passed the $1 million mark in money won. Doucet achieved the milestone driving Dashpedia to a 1:58.1 win for owners Evan Gillis and Jacob and Ryan Copley.

Add another milestone to Redmond Doucet’s harness driving career – this one with six zeros on the end.
The Inverness driver, who broke into the harness racing scene in 2001, won three of the five races he was entered in on Sunday at Inverness Raceway and in so doing topped the $1 million mark in money won as a driver.
“I wish it was for myself,” he said with a laugh on Monday. It’s the horse owner that receives a share of the purse money, depending on what placement the horse finishes, and the driver either receives a set fee or a percentage of what the owner gets.
As a rookie in 2001, Doucet had 13 starts, winning two, finishing second in two, with earnings of just $1,018. His UDRS, much like the batting average of a baseball player, was .239.
Those first two wins were with I Need A Fellow for owner Wendell Harper, and Acushla, for owner Bernie and Geraldine Gillis.
“I was just starting out and wasn’t too panicky about it. I knew I could get better at it, and I’m still getting better,” said Doucet.
Two years later, Doucet’s stock started going up. He had 156 drives in 2003, was 23-27-21 (firsts, seconds, thirds), with earnings of $24,579 and a UDRS of .288.
“I was training a few horses by then, which helped me out a lot. But the biggest thing is getting the horses.”
Fast forward to last season and now and Doucet is slugging like Vladdie Guerrero.
Last year, his earnings hit a career high of $170,307 with a .458 UDRS. In 313 starts he was 90-75-36.
This year, with the Atlantic Breeders Crown finals still ahead of him, Doucet has added $105,775 in earnings to his total.
“Those are my best two years for money earnings for sure. I had some really nice horses to drive, like Na Naa Said So (Hughie and Ali MacEachern), and Rotten Ronnie (which he co-owns with Andy Stewart).”
In total, Doucet has 3,581 lifetime starts (794-649-502), a UDRS of .369, and earnings of $1,000,386.
Doucet and Rotten Ronnie will be racing in the Atlantic Breeders Crown finals for three-year-old pacing colts in Charlottetown this Sunday for a $25,000 purse.
In the two-year-old fillies division, two horses with local ownership are in the finals. Boo Yaya (Hughie and Ali MacEachern) and JJ Scarlett (Walter Walker, Gary Gillis, Richard MacInnis, Duncan MacKinnon).
As well, three local horses in the three-year-old colts division are eligible for the $10,000 consolation finals on Saturday, including: Windemere Best Man (Simon Poirier and Chad MacDonnell); East Coast Mariner (Todd and Monica Sutherland); Betterthanbutter (Walter Deagle).
Doucet said he will be driving JJ Scarlett – “Unless they fire me.” – and Marc Campbell will be on the reins with Boo Yaya. “I couldn’t commit to Hughie early in the year,” he said.
Doucet also tipped his hat to the two finalists of last week’s amateur race who will represent Inverness Raceway in the Nova Scotia final at Truro Raceway in November.
Monica Sutherland won the event with Eastcoast Invader, a horse she also trains, in a time of 2:01.3.
Madison Poirier also qualified for the final, finishing second with Kwicky Kwanzaa, a horse she trains with her father Joey.
Keith MacDonell finished third with Lily Watson’s Real Bigg.
Evan Gillis was also entered in the race with Cliff Drummond, but the horse suffered a broken leg off the start and Gillis did a fine job in keeping the big horse up.
“Evan did a great job, it could have been much worse but nobody got hurt. That’s the shitty part of our business.”
In an attempt to cheer Evan up, the Rotten Ronnie stable presented Evan with a  framed photo showing a compilation of Cliff Drummond’s wins.
Doucet said the two ladies will be contenders in Truro.
“Monica can handle her horse for sure and sits in the bike quite nice (and) Madison is a little horse whisperer, she really is. They’ll both do well for sure.”
In the meantime, Doucet will go to work on his next million this weekend, starting with Rotten Ronnie.
“He’s 100 per cent and hopefully comes to play and gets a decent draw (in the eight-horse field). It’s the most competitive three-year-old field in the Maritimes and I have one of them – that’s pretty good.”