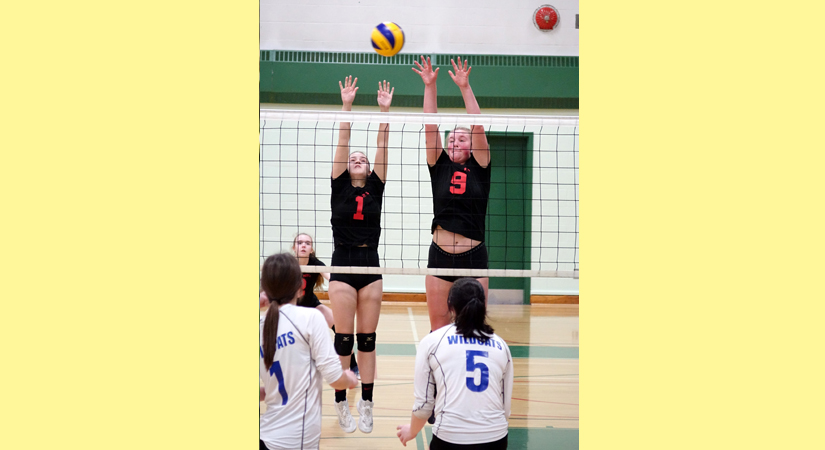 Going up for the block are Avery MacKinnon and Sarah Ryan, of the Inverness Rebels, during Saturday’s Highland Region Division 1 regional tournament at Memorial High School.

If you could buy bottled momentum, then you’d want the stuff the Inverness Rebels had on Saturday.
Needing to win the rest of their matches after opening the Highland Region Division 1 girls volleyball tournament with a loss to the Sydney Academy Wildcats, the Inverness Rebels did just that to bring home the gold from the five-team tournament in Sydney Mines.
Reeling off three straight wins, the Rebels met the Wildcats again in the final, this time coming out on top 25-14, 20-25, 15-13.
“I’d much rather lose that first game than the last one,” quipped Rebels coach Angus Campbell.

“I think they played more scared to lose than to win it and I told them after that loss that they’re capable and that it’s in their hands. They really came together after that. The leaders sat with everyone and made sure everyone was focused. The skill is there, on both teams, but it’s the mentality you have, to bend but not break, that makes the difference.”
In the opening match, the Wildcats took early leads in both games and then traded points to beat the Rebels 25-17, 25-15.
The Rebels had trouble passing the ball to their middle powers, were not communicating well on serve receptions, and were further frustrated by the lack of line judges resulting in balls getting called out that were in and killing any momentum they were trying to build.
But with that game behind them, the Rebels went on a rampage, defeating Memorial 25-1, 25-11; Riverview 25-20, 25-18; and Glace Bay 25-11, 25-8.
“The game against Riverview was big in that whoever lost was out,” said Campbell. “It was there that the girls really started digging in and not letting anything hit the floor.”
With the stage set for the final against Sydney Academy, Campbell made some changes to give the Wildcats a different look than the team they saw that morning.
“We changed our defence to cover shots down the line. The left side had to dig more. We had to block better and we had to start passing to our middles, Sarah (Ryan) and Alexa (Beaton). And in the final we got the ball to our middles every chance we got. Middle kills get the team going.”
Winning the first set 25-14, the Rebels eased up on their passing game in losing the second set 20-25.
“It’s go-time!” Campbell told the team. “You have to swing at that ball.”
With a large contingent of Inverness supporters in the stands, and line judges on the corners, the Rebels came back in the third set and were up by four points before the Wildcats tied it 13-13. But at match point, Katie Kennedy delivered a service ace to give the Rebels the 15-13 win and the Highland Region banner.
“It was great in the final with lots of Invernessers rolling in,” said Campbell.
The underdog role the team started out with is now long behind them and Campbell’s focus now is to get them ready for provincials.
“Going into provincials we’re going to be playing very strong teams so we have to have that mentality that we can compete with anybody. We’ll keep putting in the hard work, focusing on team buy-in and self-belief. At this stage everyone knows their role and where they have to be.”
Provincials are in the Northumberland Region on Dec. 3 and 4 this year but the host team and schedule won’t be known until provincial qualifiers are held this weekend.
It is expected that Cobequid Education Centre in Truro could end up being the host team. So if you’re planning a trip to Halifax to do some Christmas shopping, then check the schedule in the next issue of The Oran so that you can plan a little detour.