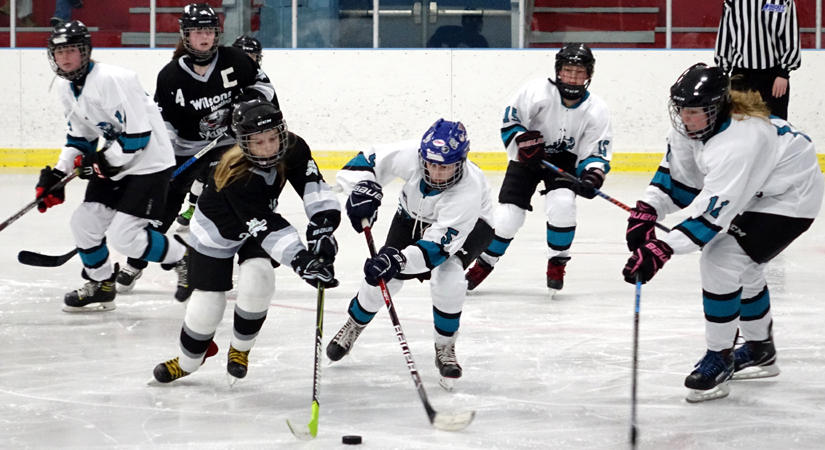 Defending their own end during Sunday’s U13 AA playoff game against Fundy-Highland in Inverness are Whitecaps Aurora MacLean, Jaelyn Kenny, Teylor Wadden, and Brianna Cameron.

-by Bill Dunphy
Tessa MacKinnon stopped every shot she saw on the weekend as the Quad Counties Whitecaps (Teal) remain undefeated in their U13 AA playoffs.
The Whitecaps improved to 2-0-2 with a 6-0 win over the Valley Wild on Saturday and a 5-0 win over the Fundy-Highland Stars on Sunday.
“We had no idea what to expect playing the Valley,” said Whitecaps coach Jason Calder, noting that due to the shortened season, the two teams hadn’t played each other before.
“We went and just played our game. The key to the win was crashing the net and getting rebounds.”
Annika Van Zutphen led the attack at the Port Hawkesbury Civic Centre against the Wild with a hat trick. Kathryn MacKinnon had a four-point game with a goal and three assists while Abigail MacAskill picked up three assists.
Ainslie Fraser and Teylor Wadden added the other single goals.
On Sunday in Inverness, MacKinnon in her home rink and the Whitecaps led the Stars 2-0 and 3-0 by periods.
Allie MacLellan opened the scoring at 4:50, tipping a centering pass from Jaelyn Kenny past the Pictou goalie.
Three minutes later Isla Gillies drove one home from the point on a feed from Van Zutphen at the faceoff circle.
The 2-0 lead held until 14:38 of the second period when Addisyn Kennedy fired a point shot through traffic after Aurora MacLean flipped her a pass from the half wall.
The Whitecaps continued to forecheck hard in the third period, highlighted by an end-to-end rush by Aurora MacLean that she finished with a pick on the far side of the goalie’s stick side.
And with 1:02 left in the game, Ainslie Fraser made it a 5-0 final on a play with Mary Morin.
“Sometimes we don’t come out in the third period so it was good to see them keep up the intensity. We also got two goals from the blueline which is something we’ve been working on,” said Calder.
The Whitecaps have three games remaining in the single round-robin. The top four teams advance to single-game semifinals and the two winners advance to a Day of Champions.
This Sunday, they are back in Inverness where they will host the Quad Counties Whitecaps (Black) in a 1 p.m. game at the Dr. Bernie MacLean Cultural and Recreation Centre.
The Antigonish-based Black Whitecaps are currently 3-1-0 in the standings.
The Teal Whitecaps wrap up the round-robin the following weekend with a game against the 2-2-0 Metro West Snipers on Saturday in Halifax and the 3-0-1 Metro West Blue Thunder on Sunday, March 27th, at 2 p.m. in Port Hood.