Girls volleyball puts its skill on display at local tourneys 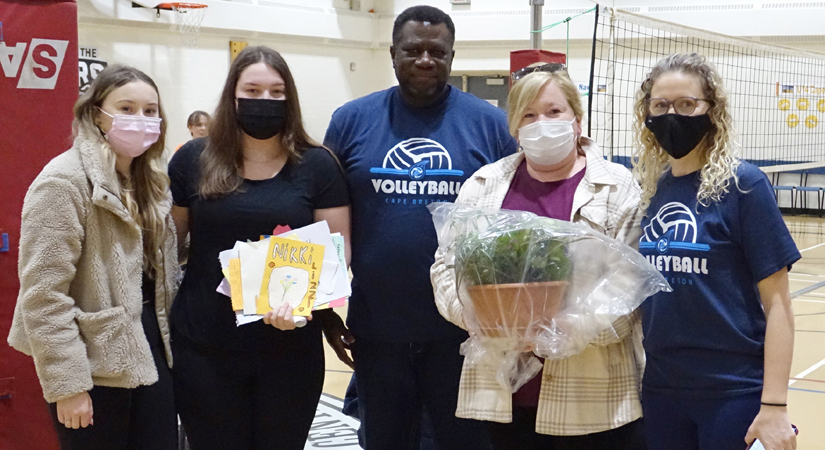 Members of Lizzi MacEachern’s family were presented with gifts and a plant in memory of their daughter and sister who was 11 when she was killed in a car crash last June. A memorial volleyball tournament was held at Bayview Education Centre on Friday. From left: sisters Samantha and Shelby, Volleyball Cape Breton executive director Ebou Secka, Lizzi’s mom Nikki, and U13 girls volleyball coach Melanie MacDonald.

-by Bill Dunphy
Unable to hold tournaments for the past two years, Volleyball Cape Breton made up for lost time with a series of tournaments across Cape Breton on Friday and Saturday.
In the U13 division, six teams were at Bayview Education Centre in Port Hood on Friday to take part in the Lizzi MacEachern Memorial tournament.
Lizzi played for Bayview before the 11-year-old was killed in a car crash last June. The tournament was a fundraiser for the Lizzi MacEachern Memorial bursary at Dalbrae Academy.
More than $600 was raised through the sale of commemorative t-shirts and donations.
Lizzi’s mom, Nikki, her sisters Samantha and Shelby, and other members of the MacEachern clan were on hand to watch the action. Nikki helped present the gold, silver, and bronze medals.
There were two local teams entered in the tournament, the U13 Red and the younger U13 Royals, who are both made up mainly of players from Inverness, Mabou, and Port Hood.
The U13 Red, who finished fourth in the round-robin, made it to the championship game and battled the first-place U13 Orange, a Sydney team, to three matches but had to settle for silver.
Lucy Gillis, of Mabou, was selected to the tournament all-star team.
U13 Royals coach Norma MacKinnon said it was great to feel a little more normal again and tipped her hat to U13 Red coach Melanie MacDonald on the work she put in to organize the tournament.
“It was an emotional day, but also a day that brought everyone together, doing something Lizzi loved so much,” said MacKinnon.
“Volleyball continues to grow in Cape Breton, under the guidance of Volleyball Cape Breton and the dedicated coaches and volunteers within the program.”
Also on Friday, a five-team U15 tournament was held at Whycocomagh Education Centre.
The U15 Royals were the local team, coached by Jessie Clarke and Kelsey Campbell.
The girls split their first round-robin match but fell 25-6, 25-16 in their second match against a strong U15 Pink team from Sydney.
Tournament results were unavailable as of press time.
And on Saturday, a five-team U16 tournament took place at Inverness Education Centre Academy.
The local Royals team, coached by Lindsay Ryan and Jill Campbell-Jessone, finished the tournament with a 2-2 record.
U16 Pink, of Sydney, won the Royals opening match 25-20, 25-17.
The girls got their game going in the second match, defeating the Antigonish Stoirm 25-23, 25-17.
The U16 Green, also of Sydney, won the tournament and defeated the Royals 25-12, 25-15 in the round-robin.
And the Royals closed out the tourney with a 25-21, 25-18 win over the U16 Black, based in Port Hawkesbury.
Ava Hannigan, of the Royals, was named to the tournament all-star team.