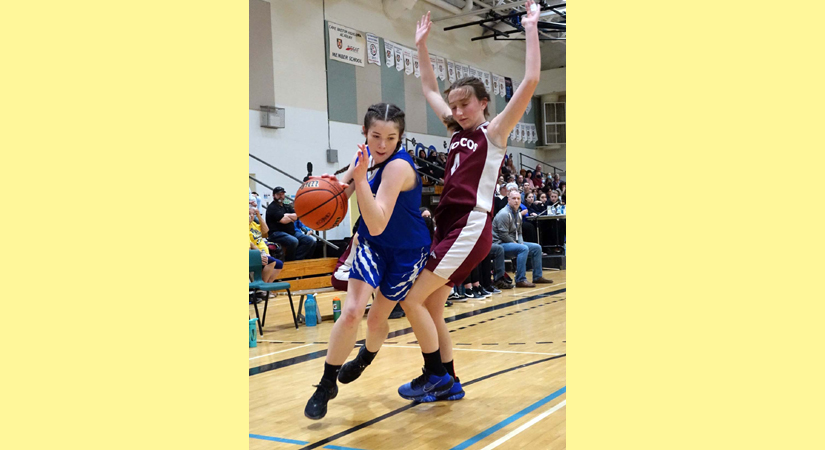 -by Bill Dunphy
It wasn’t for lack of trying that the Cape Breton Highlands Huskies finished out of the medals as hosts of the School Sport Nova Scotia Division 3 girls provincial basketball tournament.
If anything, it was a lack of seeing the mainland competition due to the COVID-shortened season.
The two Highland Region teams, including the Baddeck Broncos, were in tough against the six seasoned mainland teams, some of which weren’t shut down during the December outbreak on Cape Breton.
As a result, the only victory between the two teams was a nail-biting 39-37 Huskies win over the Broncos on Saturday.
“What it boiled down to was not seeing that level of competition all year,” said Huskies coach Billy Crowley.
“Oxford, Hants North, Springhill, they play each other three or four times during the year (and) the Northumberland Region kept going when we were shut down.”
Nonetheless, Crowley said he was proud of his team and the win over Baddeck gave the Huskies a chance in the bronze medal semifinal against Hants North.
“We stuck with them through the first 32-35 minutes before their big shooter (Arianna Lyons) took over,” said Crowley.
Lyons had 49 points in the 58-38 win over the Huskies.
“The girls were extremely happy to host the tournament. The community support and involvement was phenomenal and I probably gained 10 pounds in the hospitality room.”
The Huskies hit the court in Thursday’s first game against Springhill following the opening ceremony.
Fiddler Gillian Head marched the teams onto the court and all the grade 12s received roses.
Emily Ross and Skylar Shaw read the Athletes Pledge while Crowley and assistant coach Eilidh Ross read the Coaches Pledge.
Kaylee Wimpey opened the tourney with a strong rendition of O Canada.
But once the game commenced, the home team came out flat as the Golden Eagles built a 22-4 lead in the first quarter. The Huskies settled in for the second quarter and matched Springhill 13-13 to trail 35-17 at the half.
The Huskies worked hard in the second half, but couldn’t overcome the early deficit in a 62-37 final.
Emily Ross had 11 points to lead the Huskies. Also scoring: Abby Morrison, 8; Ava Ross and Madison Gale, 6 each; Kaycee Timmons, Laura Morrison, and Skylar Shaw, 2 each.
Earlier in the day, Oxford ran rough over Baddeck in a 94-28 win.
The Broncos were led by Emma Dixon with 13 points. Also scoring: Teagan Sampson, 8; Elsie Latwaitis, 4; Katelyn Norman, 3.
This set the stage for the two local teams to meet in a game to decide who would advance to the bronze medal semifinal.
The Broncos, who lost the Highland Region banner to the Huskies in a two-point game, came out strong to lead 32-21 at the half.
In fact, the Huskies first lead came with 30 seconds left in the game.
Led by Emily Ross with six points on field goals in the final quarter, and Ava Ross collecting three points on the free-throw line, the Huskies clawed back to win it 39-37.
“The Ross family defines basketball culture in the Margarees,” said Crowley. “There was Ainslie, Eilidh, and Sarah before now; Ava, who has a year left, and first-cousin Emily who graduates this year, and her brother Caleb, who also played. They set the bar for up-and-coming teams.”
Crowley also tipped his hat to the team’s other graduate, Abby Morrison. “Abby was a beast down low for us and was a big reason we were Highland Region champions.”
Crowley said the Huskies will have four grade 12s next year and a strong group of young players.
“The real value added by hosting is that the girls can see what can be accomplished. And our job as coaches at provincials was to network and I already have three invites to tournaments next year,” he said.
“I couldn’t say a negative thing about any part of the weekend and I couldn’t be prouder of the girls.”
The following are the complete tournament scores from game one to game 13:
#4 Sacred Heart 82 (Tallulah MacNeil, 23) #5 AWEC 45 (Eve Smith, 26).
#3 Oxford 94 (Maddison Baker, 57) #6 Baddeck (Emma Dixon, 13; Teagan Sampson, 8; Elsie Latwaitis, 4; Katelyn Norman, 3).
#7 Springhill 62 (Desiree Chatfield, 18) #2 CBHA 37 (Emily Ross, 11; Abby Morrison, 8; Ava Ross and Madison Gale, 6 each; Kaycee Timmons, Laura Morrison, and Skylar Shaw, 2 each).
#1 Hants North 63 (Arianna Lyons, 19) #8 Shelburne 27 (Kaylee Buchanan and Kiara Hemeon, 6 each).
AWEC 57 (Ava Dormer, 20) Shelburne 38 (Molly Brown, 11).
CBHA 39 (Ava Ross, 12; Emily Ross, 8; Abby Morrison, 6; Gale, Shaw and Grace Curley, 4 each; Timmons, 1) Baddeck 37 (Sampson, 16; Dixon, 8; Tara Cox, 6; Toby MacDonald, 3; Latwaitis and Norman, 2 each).
Sacred Heart 67 (Clair Rankin, 20) Hants North 49 (Lyons, 39).
Oxford 61 (Baker, 27) Springhill 35 (Chatfield, 15).
Bronze semifinal: Hants North 58 (Lyons, 49) CBHA 38 (Emily Ross, 13; Ava Ross, 9; Abby Morrison, 8; Laura Morrison, 4; Gale and Shaw, 2 each).
Bronze semifinal: Springhill 59 (Chatfield, 27) AWEC 46 (Smith, 19).
7th- 8th placement: Shelburne 46 (Brown, 16) Baddeck 36 (Dixon, 12; Latwaitis, 8; Cox and MacDonald, 4 each; Jordan Phillips and Norman, 3 each; Courtney Christiano, 2).
Bronxe: Springhill 46 (Chatfield, 22) Hants North 45 (Lyons, 31).
Gold: Sacred Heart 65 (MacNeil, 26) Oxford 43 (Baker, 23).