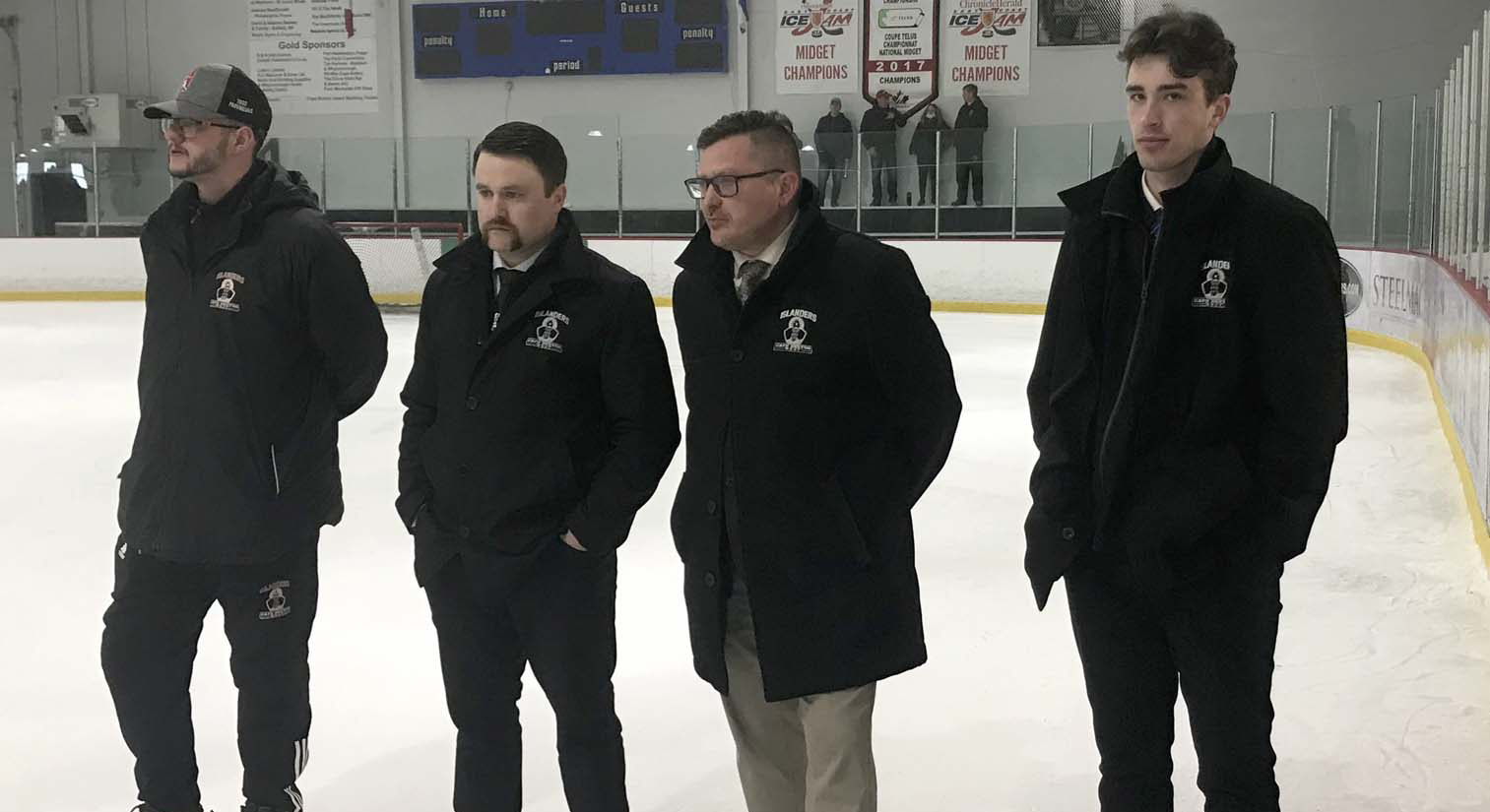 Like Cape Breton West Islanders coaching staffs before them, this year’s crew got the most out of the young men in their charge in taking them to the finals of the Nova Scotia U18 Major Hockey League playoffs. They include, from left: Dan MacDonald, Michael MacDonald, Kyle Gillies, and Keegan Gillis.

-by Bill Dunphy
If the Halifax McDonalds were good sports, they would have tried their luck back home at a deciding game five of the Nova Scotia U18 Major Hockey League final series with the Cape Breton West Islanders.
As it was, however, the Macs got the drop on playoff MVP Jack Milner and the Islanders in game four on Saturday and were more than happy to take the provincial title in Port Hood.
Down 2-0 in the best-of-five series and back at the Al MacInnis Sports Centre, the Islanders defeated the Macs 2-1 on Friday despite being outshot 44-13.
To say Milner was spectacular is an understatement as he faced a barrage of shots in each period – 15-4, 16-6 and 13-3 – but only allowed a first-period goal.
Jack MacDonald sniped a beauty in the second period to tie the match, assisted by Logan McGrath and Tully Grant.
In the third, the Macs took just their third penalty of the game, but it allowed Kevin Walker, on a play with Leyton Stewart, to score the winning goal for the Islanders.
Alive to fight another day, the Islanders took that fight to the Macs in game four on Saturday.
And unlike Friday’s contest, five goals were scored in the first period alone with Halifax taking a 3-2 lead.
The Macs struck first at 7:37 but the Islanders’ Riley Sampson tied it at 14:45, assisted by Stewart and Cadyn Power.
Halifax regained the lead a minute later and then got the luck of the bounce at 18:17 when an Islanders defenceman deflected a pass behind Milner to put the visitors up 3-1.
However, 21 seconds after that, McGrath brought the Islanders to within one with a huge goal at 18:38 on a play with MacDonald and Stewart.
The hockey was end-to-end through a scoreless second period and continued into the third as the Islanders battled the clock looking for the tying goal.
But in the end, the only goal to be scored after the wild first frame was an empty-netter by Halifax at 19:59 to secure the 4-2 win and the Nova Scotia championship.
As the Macs celebrated the win, Islanders coach Kyle Gillies and the Macs’ Tim Boyce met at centre ice to discuss the playoff MVP and Gillies said Boyce immediately told him, “Let’s give it to 29 (Milner).”
“We made history as the lowest seeded team (sixth) to ever make it to the league final (and) Milly got us there,” said Gillies. “And now he’s going to the (Halifax) Mooseheads for the rest of the season.”
Gillies said there wasn’t a game or a series where you could count the Islanders out.
“That’s the message we send out each and every year. I’m confident knowing what we’re doing here is working. It’s all about how you finish, facing all the adversities, and coming out sparkling clean on the other side.”
The Islanders lose eight players to age this season, including: goaltender Cole Goss; defenceman Leo MacLean; and forwards Jacob Cook, Ryan Digout, Jack MacDonald, Landon MacIntosh, Logan McGrath, Cadyn Power.
As well, several players have the opportunity to return for their third year of U18 Major but, for some, will consider making the jump to Junior. Among that group are: goaltender Jack Milner, defencemen Ryan Hayes, Ray MacKinnon, Leyton Stewart, Jack Taylor; and forwards Tully Grant, Kevin Walker, Rory Wood.
“Players jumping to Junior before finishing their Midget years affects us more than any other team,” said Gillies. “To lose two or three third-year players is devastating. Those years go by so fast, and I’m not saying it doesn’t work out for some, but they often pass up golden opportunities (like the 2017 Telus Cup team) in the rush to get somewhere else.”
Nonetheless, Gillies said there is a strong group of U15 AAA Novas coming up, including: Jack Hayne (23 goals and 23 assists for 46 points in 31 games); Brady Peddle (16-20-36); and Callum Chisholm (16-20-36).
“And there are the Cabot Highlander boys, who I hope come out for their third year. I look at Keir Jordan, who came out of that program, and is playing Junior A because of his decision to play his final year of Midget.”
Gillies said the team will get together for a skate at the Port Hawkesbury Civic Centre later this week and he expects that there will be an awards banquet this year.
“Overall we had a great year and I’m super proud of the effort and the commitment our guys showed. You could see it right to the end. Even in the last game fans of this team got their money’s worth in a fast and passionate game.”