U18 and U17 Capers West earn top seed heading to provincials 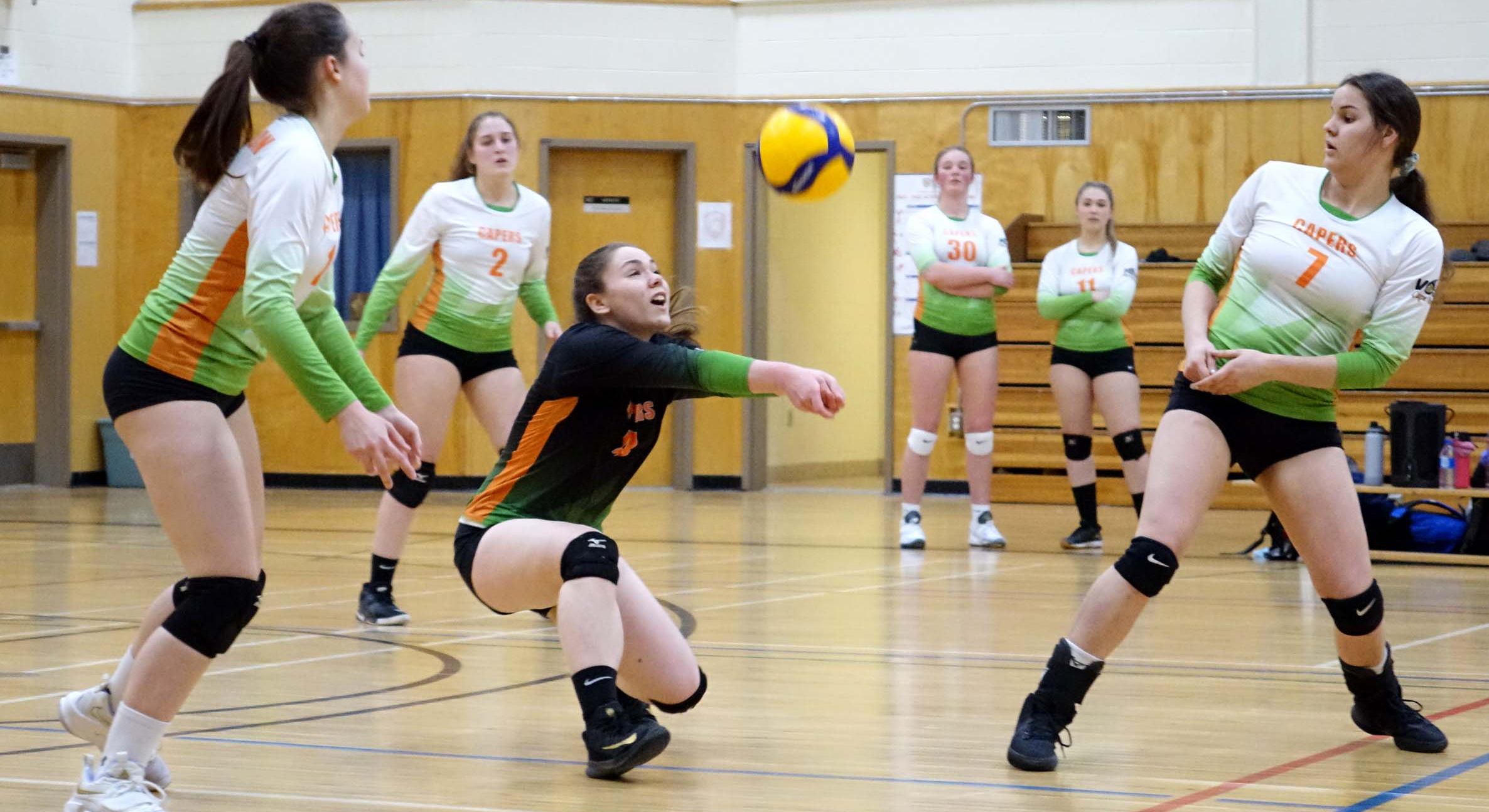 Capers West libero Katie Kennedy sets the ball as Avery MacKinnon, Laura Gould and Megan Hinkley get ready to set the attack during an exhibition scrimmage in Inverness on Friday.

-by Bill Dunphy
The Capers West U18 female volleyball team has been busy getting games in as it prepares for Volleyball Nova Scotia provincials this weekend in Halifax.
Both the U18 team and the Capers West U17 team go into the two-day tournament ranked #1 in the province.
“We had one Super Series event that we did very well in which gave us the number one seed, but there are some teams up the province that we haven’t played yet,” said Capers West U18 coach Angus Campbell.
On Friday in Inverness, the West played five sets against a U17 team from Sydney coached by Neil MacLellan.
On Saturday, the West travelled to Antigonish for two best-of-threes against the U17 Stoirm and the U17 Fury, winning both 2-0.
“We have a tight-knit group who have been playing together for a few years now,” said Campbell. “As long as we’re playing for each other and working hard, anything is possible.”
In terms of U18 being the oldest VNS age group, the Capers West is a veteran squad of 10 girls who are all graduating this year except for libero Katie Kennedy. They include: Avery MacKinnon, Laura Gould, Sarah MacDonald, Emma Kennedy, Megan Hinkley, Màilli Cameron, Chloe Haché-Odo, Summer Deveau, and Sarah Ryan.
The 18-team tournament is divided into six pools of three, with the West, in Pool A, playing #7 Chill at 5:20 p.m. on Saturday and #6 Kempe at 7:40 p.m. Both of these games are at the Bedford Hammonds Plains Community Centre.
On Sunday, the tournament moves to the Canada Games Centre with quarterfinal and semifinal action beginning at 9:10 a.m. and the Tier 1 final scheduled for 12:40 p.m.
The tournament is set up so that any of the 18 teams have a chance for Tier 1, in which the top three teams in Pools A, B, and C are joined by the first-place teams in D, E, and F. The second- and third-place teams in Pools D, E, and F play for Tier 2 gold.
David MacIsaac coaches the U17 Capers West team out of Port Hawkesbury. He said while COVID posed its challenge earlier in the season, the team is ready to compete.
“This is a great group of kids who give their best all the time. We had a very successful Super Series and if we play like we did there, we will be fine,” he said.
“We will be potentially missing Marley Beaton, our team captain, so that hurts. However, we have depth at all positions and that should help.”
There are 12 teams in the U17 tournament, divided into four pools of three. The #1 Capers West are in Pool A and open their competition on Saturday at 3 p.m. at the Canada Games Centre against #9 Richmond Rize. At 5:20 they play #8 Hants North.
The tournament moves to the BHPCC for quarterfinals and semis on Sunday beginning at 9:10 a.m. The championship game is scheduled for 3 p.m. at the CGC.