Whitecaps down Stars 2-0 to win U15 AAA Atlantic bronze 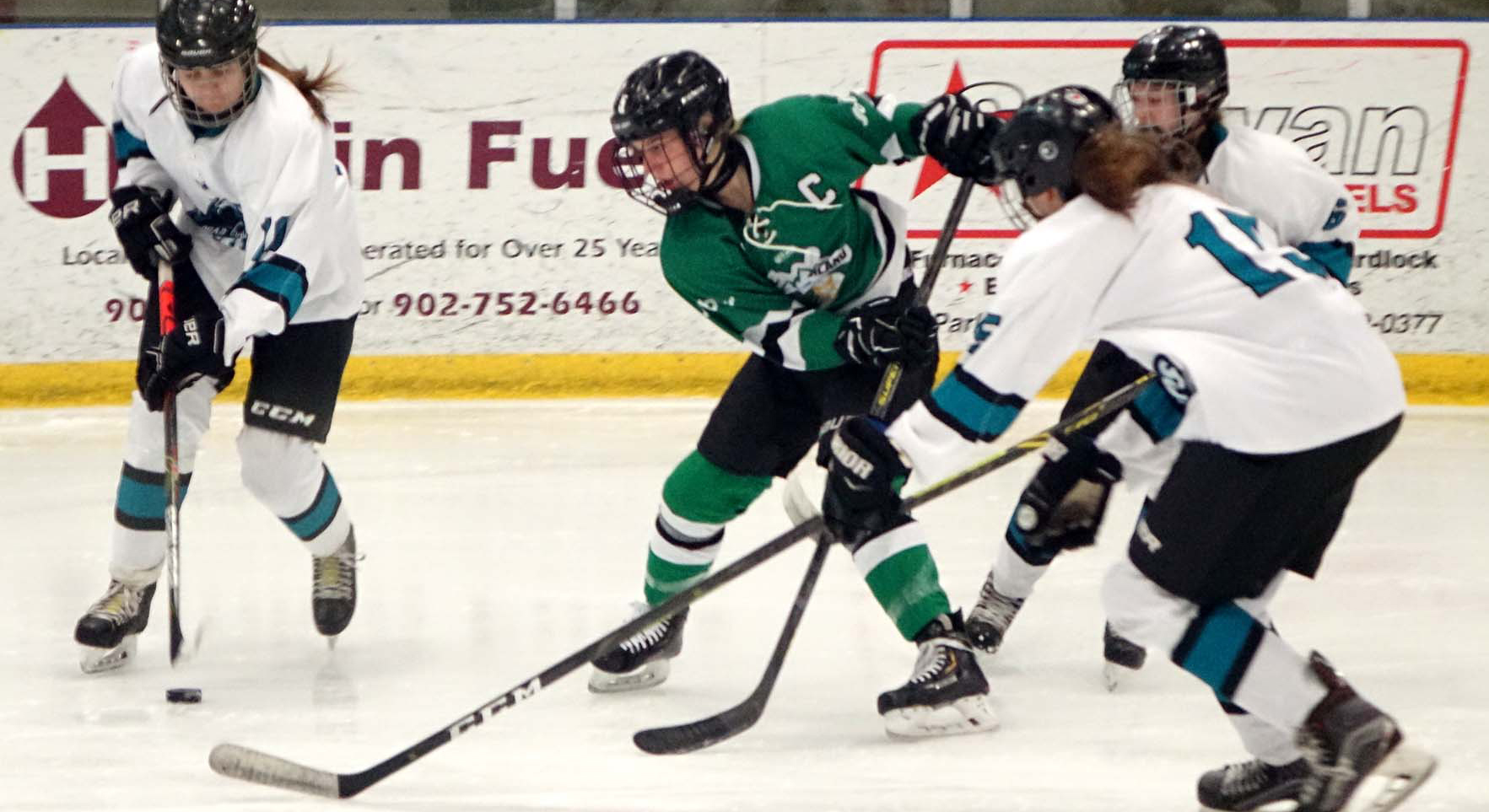 Whitecaps defenceman Breagha MacLellan picks up the puck after linemate Hannah Nadasdi knocked it loose from the Fundy forward during Sunday’s bronze medal game at the U15 AAA Atlantics in New Glasgow.

-by Bill Dunphy
In sports, bronze is never the colour of the medal you strive for, but when it represents third among the four Atlantic provinces, it’s better than no colour at all.
That’s the result the Quad County Whitecaps ended their run at the U15 AAA Atlantic Female hockey championship with, defeating the Fundy-Highland Stars 2-0 in Sunday’s bronze medal game at the Pictou County Wellness Centre.
“It was a good way to end it,” said Whitecaps captain Jenna Beaton. “We had a slow start (to the tournament) and a tough game yesterday, but we came back.
“We’re really glad we came and to represent Nova Scotia was special,” she said.
The game on Saturday that Beaton referred to was actually a 3-2 overtime win against the Eastern Icebreakers of Newfoundland and Labrador.
However, the Whitecaps needed to win in regulation time to advance to the gold medal game. Because the tournament format didn’t have semifinals, the top two teams from the five-team round-robin advanced to the gold medal game and the third- and fourth-place teams played for bronze.
The Whitecaps went into the final game of the round-robin with a win (three points), a loss and an overtime loss (one point) for four points. The overtime win against the Icebreakers gave them two points to finish with six, resulting in a three-way tie for second place with Fundy and the Western (N.B.) Phantoms, also with six points. The tie-breaking system placed the Phantoms second, leaving Fundy and the Whitecaps to play for bronze.
“It really was a tough result,” said Whitecaps coach Craig MacDonald, who opted not to pull his goalie to try for the regulation win. “We trusted the girls, and if they had scored on us, then we wouldn’t have had this opportunity to win bronze.”
MacDonald said the team got off to a rough start, losing their first two games, but rallied to create a chance for the gold medal game.
“The 18 days off didn’t help and we had a little rust, but the last three games were our best games of the year. They showed a lot of patience and the effort was amazing,” he said.
“Female hockey is in a very good spot and all five teams here were top-notch. Every team was here for a reason and they showed it.”
The Fundy-Highland Stars were the host team and had a lot of support out for Sunday’s bronze medal game, but the Whitecaps were all business on the ice.
With Elsa Cameron backstopping the team through a scoreless first period and making 19 stops in the game, the Whitecaps scored 26 seconds apart in the second period for the 2-0 win.
Kennedy Vickers scored what would be the winner at 12:34, taking a nice pass from Kate Morrow through the slot on a two-on-one and picking the top corner blocker-side for the goal.
On the next shift, Kendall Doiron scored on a scramble in front of the Fundy net. Her shot got behind the goalie and spun around on the goal line as the referee pointed that it had crossed the line.
The Whitecaps outshot the Stars in each period, including 12-4 in the third for a 32-19 total.
“A hundred per cent that was our best game of the year. I’m very proud of the girls and if you can say you won your last game of the year, then that’s something,” said MacDonald.
The gold medal match saw the Central (P.E.I) Storm defeating the Western Phantoms 2-1 in overtime.
The Whitecaps opened the tournament on Thursday with a 2-1 overtime loss to the Storm.
The game was scoreless through the first two periods before Doiron gave the Whitecaps the lead at 10:58 of the third, assisted by Breagha MacLellan.
However, the Storm tied it 19 seconds later to force the extra period.
Shots were 23-19 for the Whitecaps in regulation time but the Storm had a 6-1 advantage in overtime.
The first of two games on Friday was just one of those morning losses, a 4-1 win by the Phantoms.
Outshot 30-23, Doiron had the lone Whitecaps goal on a play with Morrow and Hali-Rose MacLean.
The Whitecaps were back on track that evening to defeat the Fundy Stars 2-1.
Cameron was on her game with the Stars outshooting the Whitecaps 29-12. But in the end, it’s the goals for that count.
Doiron scored an unassisted goal to put the Whitecaps up 1-0 after one.
The Stars replied with a shorthanded goal in the second.
And with time ticking down in the third period, Morrow scored on a set-up by Skylar MacLean to put the Whitecaps up 2-1 with 23 seconds left in the game.
And in Saturday’s final game of the round-robin, Doiron scored twice, including the winner in overtime, to defeat the Icebreakers 3-2.
Aylee Glenn opened the scoring in the second period, assisted by Hali-Rose MacLean. Doiron put the Whitecaps up 2-1 heading into the third.
Doiron’s overtime winner was assisted by Vickers and Skylar MacLean.
Cameron was in goal for the win, with the shots 37-16 in favour of the Whitecaps.
The Whitecaps lose 10 players next season to graduation. However, with a core of seven first-year players returning along with a strong group of U13s coming up, the future looks bright for the U15 AAA program.