Inverness Raceway gets ready for 96th season this Sunday 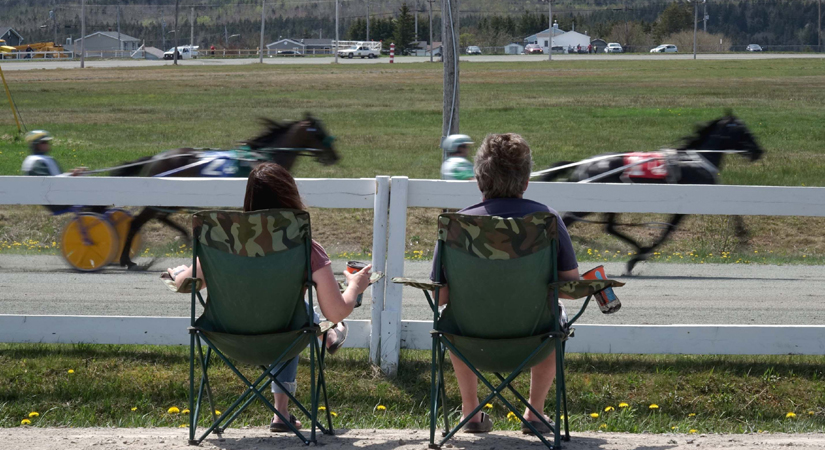 These two harness racing fans had front-row seats to the action on a beautiful Sunday afternoon as qualifying races continued at Inverness Raceway, leading up to this Sunday’s first card of the season.

-by Bill Dunphy
If there aren’t enough hours in the day to do what you need to get done, then try keeping up with Avery Fraser.
The 16-year-old horse owner and groom has four Standardbred horses that she has cared for all winter leading up to the start of the harness racing season this Sunday at Inverness Raceway.
Lofty Shadow is her horse and she is also jogging This Old Millie, which is owned by her father, Charles, and is trained by her grandfather, Frank Fraser.
As well, she is also caring for Tuckers Best, owned by Paul MacLean, and Indywheelbarrow, owned by Kevin Bailey.
If that wasn’t enough, Avery also has the Fraser’s brood mare, Put It On The Card, under her care.
And if that still isn’t enough, her pride and joy is also in the stable at Foot Cape – a one-year-old colt named Barry D. It’s named for Barry Delaney, who would be her mother Deborah’s father.
“I enjoy everything about it,” said Avery. “I work from three o’clock after school to supper time. I have a real connection with them and if nobody can find me then I’m probably at the barn.”
She said her dad and grandfather have helped her along the way and she is a licensed groom and owner.
“Getting my trainer’s licence will be the next thing. I plan to be with horses forever,” Avery said, though she’s not sure yet about becoming a driver.
Avery has learned to deal with the ups and downs of the sport, especially when horses get hurt.
“Last year, I lost my mare (Charlottes Western) on the track and then Millie got hurt and we weren’t sure she’d be back,” she said.
Her sister Gillian added, “Don’t sell yourself short. The only reason Millie is back is because of Avery.”
Avery said the loss of a horse is sad, but you learn to move on.
“I have it in my head that you feel you could have done something, but there’s nothing you can do. I was sad, but I had to get over it. I have three more horses (and) dad said you have a baby out there you have to take care of.”
Last Saturday at Northside Downs, Lofty Shadow, which Avery shares ownership with Dylan MacLean, picked up a third with a mile in 2:04.2. Also, Indywheelbarrow had a second in 2:02.1 and This Old Millie earned a fourth-place cheque.
Not a bad start to the season and a satisfying result for the work Avery put in with them all winter.
She will be back at the track this Sunday when all three horses will be entered in the opening card of racing at Inverness Raceway.
This past Sunday, 27 horses either qualified or re-qualified.
As well, one driver was busy getting four qualifying races in as he works to renew his licence after being sidelined for more than a decade with back and hip troubles.
Before taking the time off, Dougie MacQuarrie was a top driver at Inverness Raceway and he showed his old form with two firsts, a second, and a third.
“I’m still a little sore, but somehow I got through it. You get the rush out there and you forget about it...until you get back in again,” he said with a laugh.
The following are the results of Sunday’s seven qualifying races:
.