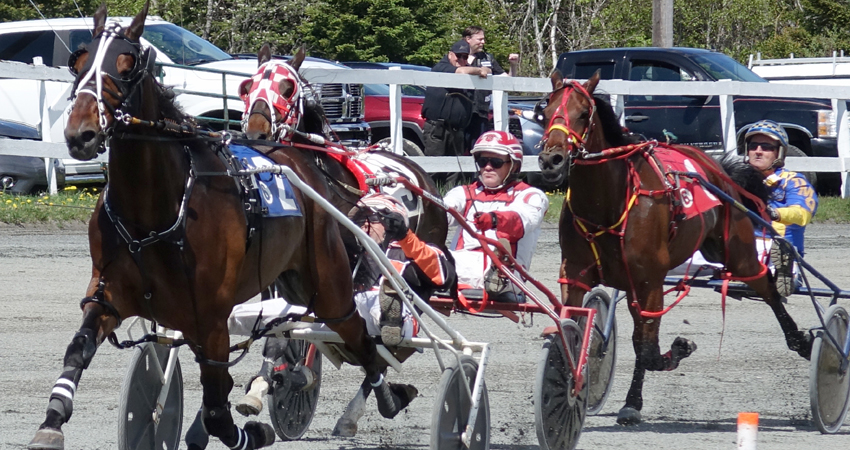 Classy 11-year-old Intended Royalty picked up where he left off last season by winning the first feature race of the year at Inverness Raceway on Sunday as Redmond Doucet won in 1:58 for trainer Randy Copley and his co-owner and dad, Eddie.

-by Bill Dunphy
There was no shortage of handshakes and hugs at all corners of Inverness Raceway on Sunday as old friends and newcomers gathered on a sunny Sunday afternoon to welcome the start of the 2022 harness racing season.
It was the first time in three years that masks and social distancing weren’t requirements, which seemed to make the occasion that much lighter.
And despite a light card of six races, there were no shortage of highlights on the track.
“We had a really good day,” said track manager Meagan MacQuarrie. “The bet wasn’t great, but nothing blew up and everything turned on.”
She said four more horses qualified on Sunday and there were other owners who were unable to be there for the opening but will have their horses entered for next Sunday.
“The bet will pick up once we can fill out the card more.”
Five of the six races on Sunday had just five horses, which usually results in small payouts.
But that didn’t take away from some great racing.
In the opener, Rodney Gillis scored his first goal of a hat trick with Tuckers Best. Owned by Paul MacLean and trained by Charles Fraser, the eight-year-old mare cleared the field by 10 lengths in a 2:02.2 mile.
Gillis went back-to-back with a 2:01.2 win in race two aboard his 11-year-old campaigner Docs Ronhenry. Sandy MacNeil made it close at the finish with a 29.1 last quarter with Rankinville Shamus.
Zach Mullins made a statement as a driver and an owner on Sunday, beginning with a 1:57.4 win on the reins of Walter Deagle’s four-year-old gelding Betterthanbutter.
Mullins followed that up with a third-place finish on his nine-year-old mare Watt Machs Me Win and a second with his newest acquisition, 10-year-old gelding Regally Magnified that he shares ownership with Stuart MacKinnon and Will Basker.
Sunday’s fourth race marked a good start for trainer and off-season harness racing writer Brady MacDougall. Six-year-old mare Credit To Burn, who he shares ownership with Mitch MacLean in 2:01.2 to give Rodney Gillis his third win of the card.
The surprise (for some) win of the day came in the fifth when Campbell MacIsaac took Gussie MacLean’s JGs Fireball for an unescorted tour of the Inverness oval. A 19-1 longshot on the board, the four-year-old mare won by five lengths, paying $38 on a $2 win ticket and keying a $299 triactor, the biggest pay of the day.
And in the feature race, 11-year-old gelding Intended Royalty did what he does best – win again. With nine wins last season, Royalty won in 1:58 for driver Redmond Doucet, two lengths up on Campbell MacIsaac and Aurolie Beaumont’s Thunder Alley.
Royalty, who has a 1:54.2 lifetime mark as nine-year-old and 58 wins, is trained by Randy Copley, who shares ownership with his dad Eddie.
Racing resumes this Sunday with a post time of 1 p.m.