100 youth runners have a pleasant day in Pleasant Bay 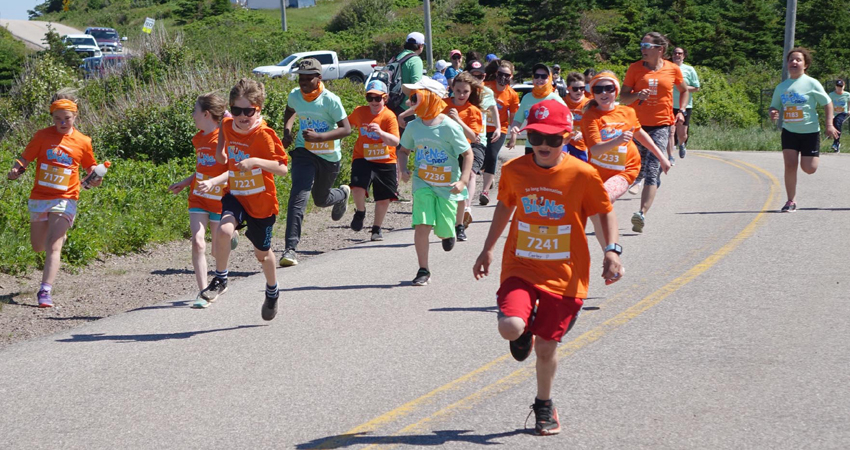 The second wave of runners blast down the closed road near Pleasant Bay School during Thursday’s Blue Nose Youth Run.

-by Bill Dunphy
The weather ‘Down North’ can be unpredictable – when it’s bad, it can be really bad; and when it’s good, there’s not a more beautiful place on Earth.
More than 100 runners, teachers, chaperones, and guests got the best of the best on Thursday as Pleasant Bay School hosted the Blue Nose Youth Run.
The event was organized by Pleasant Bay teacher Ashley Crowley, who invited 94 students from Cape Breton Highlands Education Centre Academy to take part in the event.
As well, the run was attended by members of the Blue Nose Marathon, Doctors Nova Scotia, the Kids Run Club, and the Blue Nose Marathon mascot, Myles.
“It was a great day,” said Crowley. “It’s the perfect place for a run. Not much traffic makes it safe and I always forget how beautiful the scenery is here. When you see it every day, you sometimes take it for granted until you get visitors who remind you.”
Warm-up exercises were led by Scott Goyetche and two members of the RCMP detachment in Cheticamp.
The RCMP and members of the Pleasant Bay Volunteer Fire Department blocked off the road from the school to the church, a distance of one kilometre, and the runners were sent out in three groups, oldest to youngest.
Upon their return, the kids received a Blue Nose Marathon medal. Hotdogs and freezies were provided by the Acadian Credit Union and the School Advisory Committee provided prizes and lemonade to all students and staff.
“The people at the Blue Nose were so open and willing to help in any way possible and have already said they will be back next year,” said Crowley.
“I’m just happy all the kids had fun. I’m already planning on how to make next year bigger and better. I’m hoping to have 175 kids next year.”
Crowley thanked everyone who contributed to the day, including the Acadian Credit Union, True North Destinations, Pleasant Bay VFD, Cheticamp RCMP, Doctors Nova Scotia, Kids Run Club, and the Blue Nose.