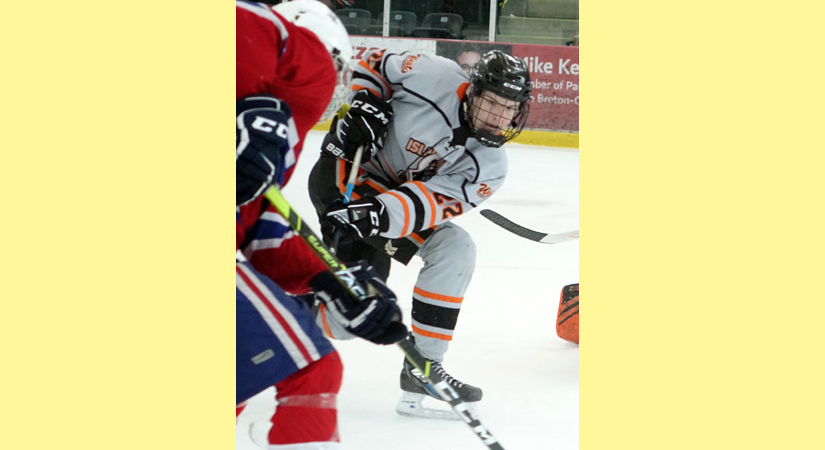 A shut-down defenceman and captain of the Cape Breton West Islanders last season, Ryan Hayes was acquired by the Cape Breton Eagles in a trade with Acadie-Bathurst on Saturday.

-by Bill Dunphy
The hardest-hitting defenceman in the Nova Scotia U18 Major Hockey League last season was picked up in a trade by the Cape Breton Eagles on the weekend.
Ryan Hayes, of Port Hawkesbury, was an 8th round draft pick last year by the Acadie-Bathurst Titan in the Quebec Major Junior Hockey League entry draft.
On Saturday, in a series of trades with Acadie-Bathurst as the QMJHL’s summer trading period opened up, the Eagles acquired Hayes, Thomas Belgarde (2002-01-29), along with Chicoutimi’s ninth-round draft pick in 2022 and Drummondville’s second round draft pick in 2023.
In exchange, the Eagles sent to Bathurst defenceman Emile Perron, forwards Blake Pilgrim-Edwards and Nicolas Hogue, and Cape Breton’s fifth-round pick in 2024. The Eagles then moved Belgarde to Victoriaville for Saint John’s first-round choice in 2022 and Val-d’Or’s fifth-round draft pick in 2024.
Hayes, who was also the first-overall selection in last year’s Maritime Junior A Hockey League when he was picked by the Miramichi Timberwolves, said he’s looking forward to going to the Eagles camp.
“I was pretty excited to come back to my own town,” he said while working out on Monday.
Hayes said while the trade came as a surprise, he was not unknown to the Eagles new general manager, Sylvain Couturier, who was Acadie-Bathurst’s GM last year.
“He was the one who drafted me (and) liked my style at camp last year,” said Hayes, who opted to play U18 Major after he was cut from the Titan.
A source with the Eagles said Hayes, who is 17, will likely be fighting for the sixth defenceman position, going up against 20-year-olds who have been in the league as well as others who have been drafted, including the Eagles’ first-overall pick in Monday’s entry draft, Tomas Lavoie, of Quebec U18 team Collège Esther-Blondin.
“I’m happy with that. A lot of those defenceman are offensive minded. I’ve been a shut-down defenceman and there aren’t many of those around. A team needs to have a shut-down guy in tight situations.”
At 17, Hayes still has other options, including playing in Miramichi or returning to Cape Breton West for his final year with the Islanders.
“Miramichi would most likely be my second option, but that’s all up in the air. Right now I’m focussing on making the Eagles,” he said.
Lavoie was one of three draft picks the Eagles made in Monday evening’s first round of the entry draft. It was the first time in franchise history that the Eagles had three in the first round.
The rest of the entry draft was held on Tuesday night. The Eagles held 17 picks in the 14-round draft, plus the first and 19th pick in the American draft.