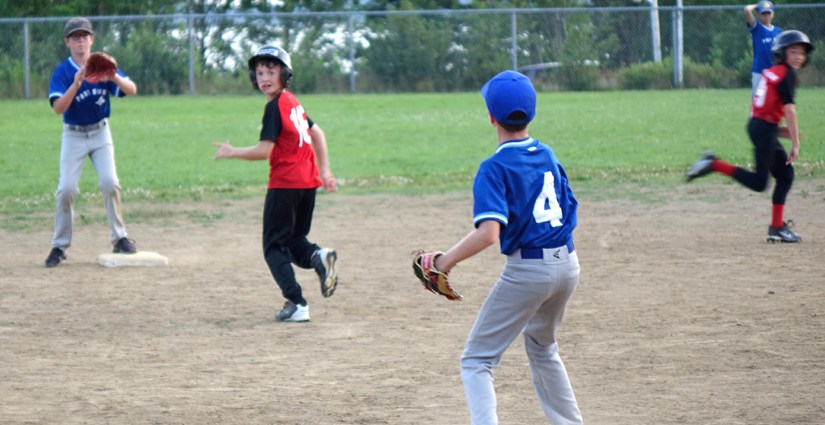 Caught in the soup, Danny MacDonald of the Inverness Ravens is chased back to second base as Port Hood Blue Jays third baseman Luke Calder throws to Gradin Spears at second during Thursday’s U11 baseball game in Port Hood.

Despite the score, it was a win-win for the Port Hood Blue Jays and Inverness Ravens in a well-played U11 baseball game in Port Hood on Thursday.
The Blue Jays had three games under their belt heading into the game, but they were lopsided wins against Antigonish and Richmond.
The Ravens, playing in their first game of the season, gave the Jays the competition they were looking for.
Port Hood came out hot as Malcolm MacInnis pitched a three-up, three-down first inning then led the bottom half of the inning off with a double.
Reid Anstey followed with a two-run in-the-park homer to put the Jays up 2-0.
Ravens pitcher Colton MacIsaac struck out the next batter, but a walk, a single by Colin MacDougall, and two more walks brought in another Port Hood run to make it 3-0. The teams had agreed to limit the runs per inning at three.
The second inning was scoreless and Roddie Gillis took over on the mound for Port Hood, striking out the first two batters.
However, Alex Dan MacDonnell started a two-out rally for the Ravens with a double and came home on an RBI single by Ryder MacLean. Colton MacIsaac moved MacLean over to second with a base hit and Sam Watson delivered with an RBI single to make it a one-run game before Gillis struck out the next batter for the third out.
The 3-2 lead held until the bottom of the fourth when the Blue Jays added three more runs to make it a 6-2 game.
Ashton Hawley led off the inning with a single, followed by a walk to Blake Warcop. Andrew MacNeil drove in Hawley with a base hit.
Gradin Spears was hit by a pitch to load the bases and RBIs from MacInnis and Anstey brought Warcop and MacNeil home.
The Ravens got one of the runs back in the fifth with MacDonnell reaching on a base hit and coming home with MacLean’s second RBI of the game.
However, Anstey pitched his way out of that inning and then shut the Ravens down in the sixth for the 6-3 Blue Jays win.
The Ravens got their first win on Saturday when they defeated Richmond 9-2 in River Bourgeois.
The Blue Jays are in Petit de Grat this evening (Wednesday) and then head to Inverness on Friday for a 9 a.m. game against the Ravens.
The Ravens continue their home stand on Saturday when they host Antigonish at 1:30 p.m.