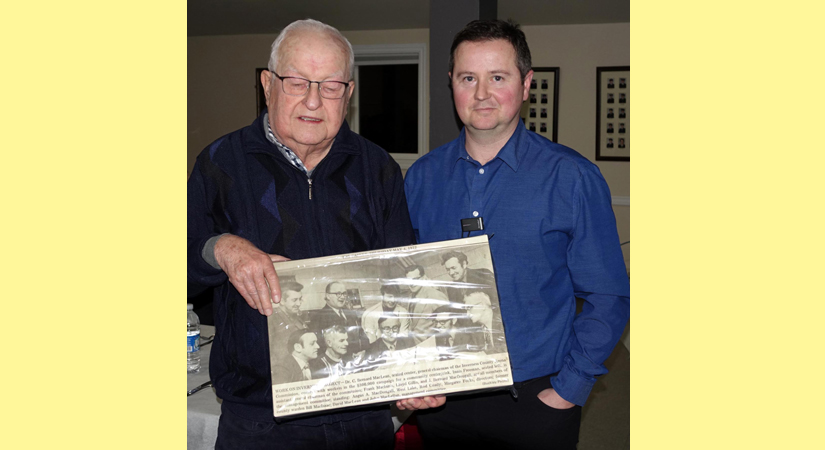 Inverness Arena Commission chair Neil MacQuarrie (right) presented a photo on canvas of the original committee members who helped bring an arena to Inverness to Dr. Bernie MacLean, for whom the arena is now named, during the 50th anniversary celebration of the arena last Friday.

-by Bill Dunphy
From day one in 1972, the Inverness Arena Commission began raising funds, not just for the construction of the building, but for all the renovations, modernizations, and improvements that came after that.
Fifty years later, the current members of the Inverness Arena Commission are embarking on another fundraiser.
Now named the Dr. Bernie MacLean Cultural and Recreation Centre, the group entrusted with the arena’s care and upkeep marked the 50th anniversary with a dinner and celebration of the people who have kept it going all those years.
The dinner, a delicious Chinese meal whipped up by chef Frankie MacKinnon, was held on Friday at the Inverness Fire Hall and the full house was a veritable who’s who of Inverness hockey people.
Commission chair Neil MacQuarrie, in his opening remarks, tipped his hat to the group of men who got the ball rolling in 1972, including the first chairperson Dr. Bernie MacLean, who was present for the celebration. That group also included Innis Freeman, Frank MacInnis, Lloyd A. Gillis, J. Bernard MacDougall, Angus A. MacDougall, Rod Coady, David MacLean, and John MacLellan.
MacQuarrie also acknowledged the many users of the rink who have committed time and service to it, including former commissioners and staff, the Inverness Minor Hockey Association, Inverness Figure Skating Club, Inverness Rebels high school hockey team, adult leagues Town and County, West Island Senior Hockey League, Gentlemen’s League, and the countless volunteers throughout the decades.
Inverness County Warden Bonny MacIsaac also spoke to the value of the arena to the community.
“I remember as a child the work, planning, and fundraising that came together to build this vital resource for our community,” she said. “It was the place to be in the 1970s – the heart and soul of the area.”
MacIsaac noted the support the county has provided in recent years, including a $5,000 annual grant as well as over $40,000 of capital funding over the past five years. For the recent revitalization program, the county provided $30,000, or 40 per cent, of the total budget.
“It is fitting that the Dr. Bernie MacLean Cultural and Recreation Centre is still looking toward the future,” she said.
Three past chairs also took the podium to reminisce about their time on the commission.
He commented on how well the arena was constructed. “They used quality material and quality workmanship, thanks to the man in front of me (Dr. Bernie),” MacLean said.
“In the late 1980s, the arena had low cash flow and lots of bills. We got Frankie Gillis to run the canteen and he turned it into a money maker. It brought in $10,000 that first season and eventually up to $15-20,000.”
MacLean also named some of the people who contributed in different ways during his tenure, including ice maker Joe MacLeod, electrician Buddy Timmons,  arena managers Dougie Ryan and John Begin, Charlie and Bernie MacKenzie and Eldon Doyle for always being there, and sound technician Dougie Cameron.
Past chair Cameron MacQuarrie spoke of the challenges the commission has faced over the years in raising funds for the many upgrades in order to make the arena “safe and accessible to all our citizens.”
“Fifty years represents a tremendous effort. Since 1995 there has been $895,000 in repairs, investments, and equipment and facility upgrades.” he noted.
MacQuarrie said, on average, it costs $150,000 a year to operate the arena. Of that, 60 per cent comes from ice rentals and the remainder, $60,000, comes from various fundraising efforts, including the weekly bingo.
“The bingo players are all amazing supporters and are directly responsible for helping keep the arena open.”
In closing, he thanked Dr. Bernie for getting the ball rolling so many years ago.
“Over all the deliveries you were responsible for over the years, delivering the arena to this community tops them all. Dr. Bernie, your baby is 50 years old!”
Past chair Dougie Beaton, who said public speaking is easier said than done, was convinced to say a few words by his wife Angela.
“Think about what the rink has meant to us, she said. I was 10 years old playing hockey and John Neil P. (MacLellan), Buddy (Timmons), and Neil MacEachern were coaches. My sons all played hockey and always took work, behind the scenes work,” he said.
And in the end, during the past 50 years, the rink has provided memories for three generations of families.
Before sitting down to the meal, Neil MacQuarrie presented a photo on canvas of the original committee members who helped bring an arena to Inverness to Dr. Bernie MacLean. The photo was taken from The Antigonish Casket (four years before The Inverness Oran was born).
In his closing remarks, MacQuarrie reflected on recent projects achieved by the current arena commission, including heat pumps for the dressing rooms, accessible doors and ramps for the arena entrance, four sets of new exit doors, a new Zamboni ice-resurfacing machine, and upgrades to the cable building.
The funding partners for those projects included the federal, provincial, and municipal governments, Inverness TV bingo, Inverness and Cape Breton West minor hockey, the local business community, the Dr. Bernie MacLean Golf Classic, and the 2015 Chase the Ace event that provided the rink financial freedom.
MacQuarrie then announced a new fundraising initiative, with a goal of $50,000, that will provide renovations to the warm room, the washrooms, and netting for the seating side of the rink.
Called “Fill the Net,” individuals and businesses who make a donation will have their contribution displayed in the form of a puck.
There will be different sized pucks for different sized donations: small puck, under $100; medium puck, under $500; large puck, under $2,500; extra-large puck, under $5,000; and extra-large gold puck, any donation over $5,000.
Donations can be made by e-transfer or cheque. E-transfers can be sent to This email address is being protected from spambots. You need JavaScript enabled to view it.. Cheques can be made out to the Inverness Arena and sent to P.O. Box 486, Inverness, NS, B0E 1N0.
To receive a tax receipt, include full name of individual or business and a complete mailing address.