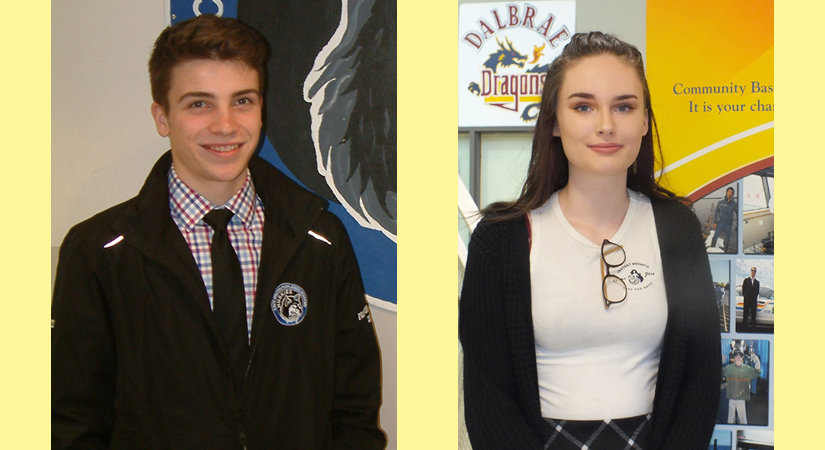 Campbell Hart and Zoe McDaniel were the recipients

- by John Gillis and Rankin MacDonald

Two Nova Scotia students have been awarded the prestigious Loran Scholarship for 2018 and both of them are from Inverness County.
They are Campbell Hart, 17, from North East Margaree, a grade 12 student at Cape Breton Highlands Academy and Zoe McDaniel, 17, a grade 12 student at Dalbrae Academy who comes from Brook Village.
Since 1998, the Loran Scholarship Foundation, a privately funded charity, has handed out $31.5 million in scholarships to students from across Canada.
This year, the foundation received over 5,000 applications, interviewed over 500, and invited 88 to Toronto on February 2nd to 3rd for final assessments.
Thirty-four scholarships were awarded.

The rigorous selection process is designed to seek out evidence of character, integrity, courage, grit, compassion, and inner directedness in young leaders committed to serving others.
The scholarship is worth $100,000 over four years plus a $10,000 annual stipend, tuition, waivers, mentorship, funding for summer internships, annual retreats and a week-long orientation expedition in the Algonquin Park.
Campbell Hart is the son of Brooks and Ethna Hart and is a the brother to 16-year-old , Olivia.
He heard about the scholarship from his guidance counselor John MacKinnon and from past students of CBHA, so in October he decided to send in an application.
Campbell said the more he looked into the application process he became overwhelmed as he began to reflect on what he contributed to his school and his community, about his character, leadership potential, and his service to others.
After much introspection on how he lives his life he decided he had a reason to apply for it and was prepared to go the distance.
Campbell was involved in school activities, sports, worked hard on his farm, and felt he had a good work ethic as well as a passion for life.
He was a very busy young man but his time with his family was all important to him.
“It all happens, it all works out,” he offered.
It’s easy to talk to Campbell and he accepts the teasing of his classmates with a big smile.
For Campbell Hart, life is full. “We’re pretty proud of him,” said John MacKinnon.
He wants to be a vet and is looking to Dalhousie, McGill, or Guelph for his undergraduate work and then on to Guelph, UPEI, or Saskatchewan for his Doctorate of Veterinary Medicine.
The Loran Award should help him get well started on this road to his future.

Also on the list of the Loran Scholars Foundation from Inverness County is Zoe McDaniel of  Dalbrae Academy’s Class of 2018.  Zoe is a native of Brook Village and she’s the daughter of Francis and Anne Marie McDaniel and a sibling to brothers Aaron and William and sister Clancey.
In a conversation with The Oran last Monday, McDaniel said she received the news last Sunday.
“We were stopped at the Big Stop that’s in Truro but I was too nervous to eat.  We were returning to the car and I got a phone call from a Toronto area code.  I answered it and the call was from a woman named Heather Spratt.  Heather asked me if it was a good time to talk and I said it was.  She agreed it was a really good time because she said she had really good news and I just started crying my eyes out,” said McDaniel.
McDaniel said excitement and awe is how she feels a week later knowing now “that I can go to university without worrying about paying for it which is a huge weight off my shoulder.”
McDaniel’s first choice for university studies is University of BC in Vancouver and her second is St. Thomas in Fredericton.  Her wish is to study museum studies at the University of British Columbia.
“I want to study museum studies at University of British Columbia and one of the reasons I chose that program is they have a lot of museums on campus that you can curate in your undergraduate studies.  Then you graduate with work experience which is very helpful,” McDaniel added.
McDaniel is a youth member of the Mabou Gaelic and Historical Society,  An Drochaid.  She’s a secretary there but she also did research for another program which just evolved into the position she now holds there.  She’s also been very involved in the Challenge Movement with leadership roles organizing and facilitating weekend retreats at Mabou Renewal Centre.
“The Challenge Movement is a youth movement that holds religious retreats twice a year.  Fourteen youth are on the team that organize it and we have up to 20 girls who attend on the weekend.  I run a free peer tutoring program which I started during the work-to-rule period last year because the teachers couldn’t give the students extra help.  I’m also a member of the Dalbrae Dragons Drama Club.  I am on the Students Helping Our World (SHOW) committee and I was a Healthy Relationships for Youth facilitator and I got to work on the curriculum for that last year.
McDaniel has an interest in languages as well and has taken Gaelic classes for the past four years.  She also participated in the Explore (French) program last summer.  Zoe also edits and writes for the student newspaper.
Zoe also enjoys writing poetry and she has had a couple of poems published including one written about the Cenotaph in Port Hawkesbury.
“I’m excited to see how my new turns in life will impact my poetry and that sort of thing,” she added.
Zoe was asked what she believes she’ll most miss about her days at Dalbrae Academy.
“I think I’ll miss how we’re such a tightly knit community, seeing everyone’s faces, knowing who everyone is and the conversations you have,” she concluded.
Congratulations Zoe and enjoy your time and your studies on Canada’s West Coast!