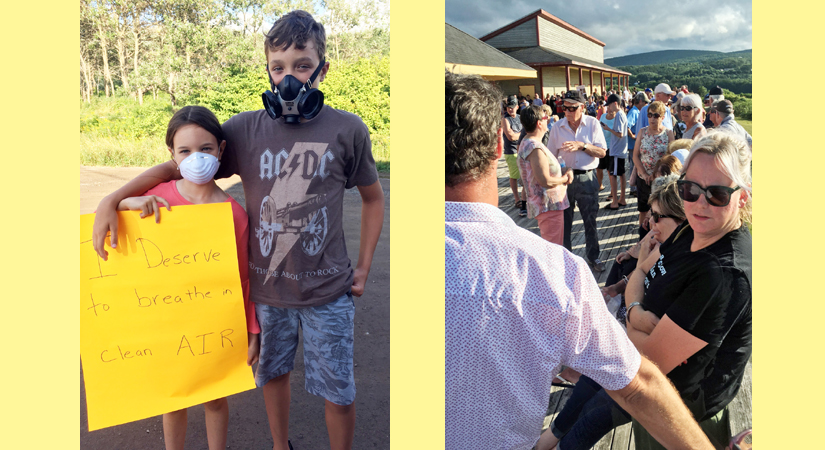 Left: Mary and Angus MacKay showed how they felt about the sewage lagoon’s effect on air quality.

Right: The crowd filled the deck on the ocean side of the Inverness Miners’ Museum.

Stop the stink.
That was the message from Invernessers, who rallied Monday evening, hoping to fend off nasty odors that have wafted for months from an aging sewage treatment plant, leading residents and tourists to wrinkle their noses and close windows in summer heat.
“People are getting sick to their stomach,” organizer Rose Mary MacDonald told the crowd, which gathered at the Inverness Miners’ Museum. “They’re gagging on it. It’s coming into our homes, and it’s because the treatment plant has reached its capacity.”
“We are in a crisis.”
“The government is not listening to the needs of Inverness.”
“We grew so fast over the past five years, and our infrastructure has not been brought up to date.”
“It’s embarrassing to have to explain to tourists what the smell is.”
MacDonald said that 700 people had signed a petition that the Inverness Development Association presented to the county on Thursday, asking it to deal with the problem.
“We want to be clear: This is not just a summer capacity problem.  This is a growth problem.”
MacDonald said Inverness is the fastest growing community in Cape Breton, which is good news, but “do we really want the other side of the story to be that we can’t even issue building permits because our sewage treatment plant is past capacity?”
MacDonald said MP Rodger Cuzner told her that 60 Nova Scotia communities have submitted applications through the province for federal infrastructure funding.
The province stamped approval on 20 of the applications, but “40 are still sitting at the provincial desk,” MacDonald said. “Whycocomagh was recommended. Inverness is not.”
Meanwhile, Warden Betty Ann MacQuarrie said the county would post the details of nearly $30,000 in fines that the Department of Environment has imposed on the county, largely for failing to file reports on water and sewer systems.
“That’s something that we could have put toward infrastructure repairs, rather than fines,” MacQuarrie said.
“Like Rosemary said, we did apply through the province and the federal government for infrastructure projects. But first, we did a total engineering study of the whole municipality, and the two that came up first were Whycocomagh and Inverness.”
“That was a few months ago. Things have changed.”
MacQuarrie echoed MacDonald’s comments about rapid growth.
“It’s our responsibility to keep up with that growth, and that’s what we’re trying to do, but we also have the rest of the municipality, the other six waste-water treatment plants, and the other six water treatment plants.”
“So, it’s a gigantic effort, but we’re moving forward with the first two, and like Rosemary said, it’s not official, but it looks like Whycocomagh has been approved, and Inverness (village) is waiting in the wings.”
“But we can’t wait for that. We have to do something in the interim to make sure that the effluent is tested on a regular basis and repairs are done so that the odor is conquered.”
Councillor Jim Mustard said he would ask council at the next meeting to borrow the money for the new plant.
County CAO Keith MacDonald said county staff has already fixed parts of the plant, including repairing the digester blower and adding new ultraviolet lights to the system.
Inverness sewage goes first into a grinder, and then it is aerated, digested, clarified, and disinfected before running through outflow pipes into the ocean.
“We have been trying to adjust and fix all those items but that lagoon is our biggest challenge right now,” MacDonald said. “It’s basically gone septic. And even though we changed the aeration, it’s so thick on the bottom, we have to do a major repair.”
“We’re going to have to have temporary containment to pull all that apart.”
“As you can imagine, when we take that material out, it’s going to be even more impactful in terms of odour.”
MacDonald said the Inverness village sewage plant is part of $130 million in infrastructure upgrades that are needed throughout the county.