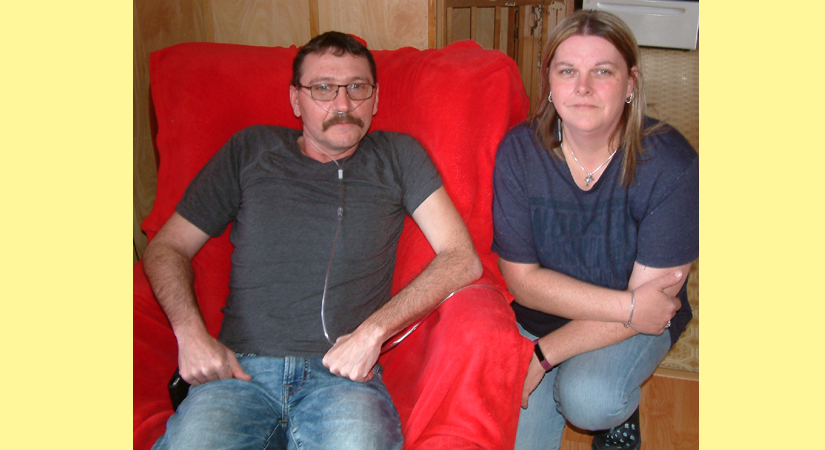 D.J. Timmons and his wife Edna were afraid of what the future held when this photo was taken in March. Their future together looks much brighter now.

D.J. Timmons of Margaree Centre is breathing easier these days following his double lung transplant in Toronto.
It was a different story last spring when The Oran visited D.J. and his wife Edna, because at 44 years old D.J. was pretty well confined to his armchair no longer even able to put wood in the fire.
When he began to experience breathing problems, he went to see the doctor, who diagnosed D.J. as having Alpha I Antitrypsin.
In March, the disease began to progress faster and without a lung transplant he wasn’t long for this world.
The disease is a genetic disorder that attacks the kidneys and lungs for people usually between 20 and 50 years old.
His lungs lacked the protein that helps keep the lungs clean and healthy.
In the spring, he was waiting for a call from Toronto General to come to Toronto to be assessed. A week later he got the good news that he will have the transplant, but would have to come to Toronto as soon as possible.
With D.J. not working and Edna working at the Inverary Manor, they didn’t have a fraction of the money they needed to go and set up housekeeping in Toronto.
But through the internet, the community, and more help from the provincial government, they finally had the finances to move to Toronto on July 20th.
On September 25th, D.J. was given a double lung transplant at the Toronto General.
“He’s tired, and so am I, but he’s doing wonderful,” said Edna by phone from Toronto on Monday night.
His mom and dad, Harriet and Ronnie, went to Toronto to be with him during his surgery.
They are moving back to the apartment this week, and they expect to be back in Margaree Centre by January.
He exercises three times a week to strengthen his new lungs.
“It’s a 1000 pounds of stress off our shoulders,” Edna added with optimism in her voice.  “It’s wonderful to see him breath normally.”
“We’re doing ok,” she said.
Edna said she wants to thank everyone who helped them, especially the community because they truly needed the support and prayers so that D.J. could go on with his life.