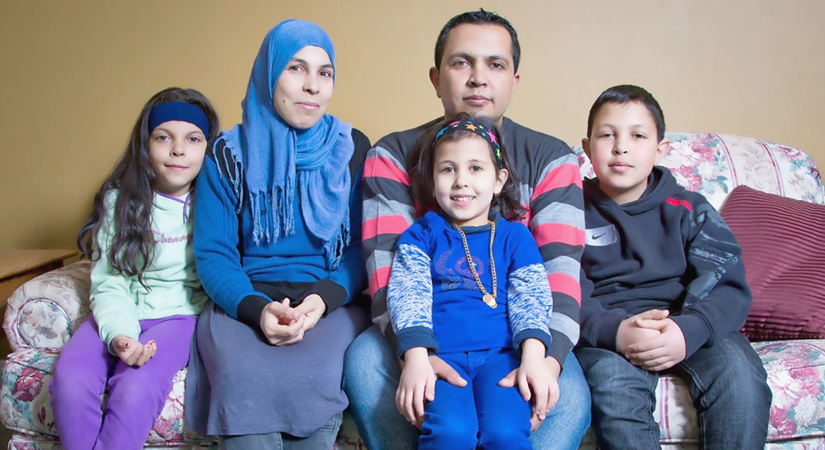 Over four years ago, Lifeline 224 started the process of sponsoring a Syrian refuge family for resettlement in Cheticamp, Cape Breton.
Lifeline 224 is a collection of local people, businesses, organizations, and churches who assist St. Andrews United Church in Pleasant Bay with the refugees’ sponsorship.
Our mission is to advocate for the sponsorship of refugees to Canada and our goal is to reach out to everyone interested in lending a helping hand with the resettlement of these newcomers to the area and to advocate and educate in order to become a welcoming community for newcomers.
“The end result is a win-win: a new home for refugees that need a safe place to live and young families for an aging community,” says Lifeline 224 chair, Howard MacKay.
The current committee members of Lifeline 224 are Howard MacKay, Lenora Timmons, Jeannie Urquhart, Cindy Crawford, Annette Lelievre, Velvet Matinna, Heather Davis, Lisa O’Neill, Carolyn MacKay, Ginette Chiasson, and Michel Williatte-Battet.
Legacy (or past) committee members are Paul Desveaux, Alfred Poirier, Marcel Bourgeois, Donna Timmons, and Christine Doucet.  All legacy members still have a very active role in Lifeline 224 and our committee calls on their services all the time. In addition, we will be expanding our Lifeline 224 committee structure when the new families arrive to provide more help and support for them.
The first family
Mahmoud AlNassaan, Rahmeh, and their three children arrived in February 2016. It has been heart warming to see how the community has embraced this family. Their integration into the local culture speaks volumes to the adaptability of the family. The generosity and acceptance from the local community has been exceptional; and for this, the family is extremely grateful. The children have settled into local schools and are now tri-lingual (English, French, and Arabic), the parents are employed and have also purchased a home. They now have a world of opportunity. All of us on Lifeline 224 have been honoured to stand alongside them on this journey and we have become good friends.
Making a positive impact
Yet, many of their beloved family members have not been so lucky.  In this time of unrest and uncertainty in the world, one can feel powerless to make a positive impact. We are not powerless, and, by bringing a family out of a war zone we can make a dramatic positive change in the course of their lives.
Hence the journey continues. Lifeline 224 continued to assist St. Andrews United Church in Pleasant Bay by sponsoring both the parents and brother’s family (parents and five children) of the Mahmoud Alnassan’s, via the Private Sponsorship Program. They are currently in a refugee camp in Lebanon, living in what is a substandard environment with no future. Private Sponsorship Refugee (PSR) government applications had been submitted and fundraising has been ongoing for the new families.
However, due to some medical issues with Mahmoud’s mother, they withdrew their applications. Our hearts went out to the family for this difficult decision. We then chose to sponsor Rahmeh’s brother Mohammad AlRoumi, his wife Hiba, and their pre-schooler Zein plus Mahmoud’s cousin Ahmad AlNassan, his wife Dhiye, and four children Mohanad, Mustafa, Houda and Fatima. Their applications were submitted to the United Church early 2018. Unfortunately, the change in families has cost us a one to two-year delay in the arrival of the new families.
Lifeline 224 submitted new PSR application documents into the United Church by the end of January 2018; however due to an application backlog, these applications were not submitted to the government until August and September respectively. We received “G” numbers, (i.e., officially on the government’s list) for both families in October of 2018. The families had a FOCUS interview (a preliminary government interview) on March 6th, 2019, in Beirut, Lebanon.
They had been notified of their flight arrangements and we had expected them by the end of March 2020. However, with the current COVID-19 restrictions, their arrival has been postponed. While this latest delay has been heart wrenching, we understand the need to keep everyone safe with this unfolding pandemic and hope that new flights can be arranged before too long.
We currently have two houses that can be used for the families in Cheticamp, one of which is ready and the other in the final stages of being prepared.
About Private Sponsorship Refugee (PSR) Process
In Canada, in addition to government assistance, private individuals or organizations can also help sponsor refugees. Canada is the only country in the world to offer this opportunity. What it means is that instead of the government paying for and assisting refugees through the resettlement process, private groups of people do it. The group, in this case Lifeline 224, must prove it can financially support the new refugees for their first year in Canada. This includes rent, transport, food, clothing, and any other ordinary living expenses. Lifeline 224 has raised the required amount and we would like to express our sincere thanks to the local community for their generous financial support.
This committee reports that it will only do more public fundraising if unforseen needs emerge.
(This article was submitted recently by Lifeline 224)