Improvements will extend life of tree nursery by 40 years 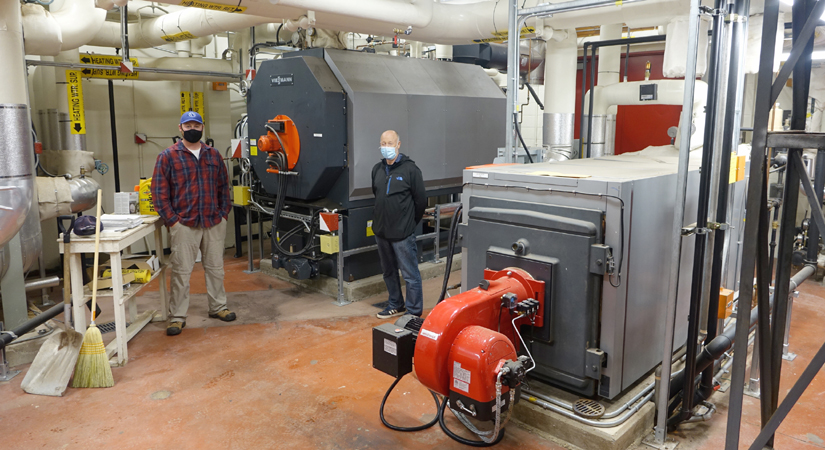 Strathlorne Forest Nursery superintendent Sean Gillis and Forest Research and Planning manager Bruce Stewart stand next to the new pellet stove that has helped reduce the nursery’s dependency on oil by 98 per cent.

At nearly half-a-billion trees and counting, the Strathlorne Forest Nursery isn’t going anywhere.
And given the improvements, renovations, and innovations made in the past year, the provincial government has double-downed on the facility’s viability for the next 20 to 40 years.
In an interview last Thursday, Forest Research and Planning manager Bruce Stewart and nursery superintendent Sean Gillis sat down with The Oran to provide an update on what’s been happening at the 40-year-old Inverness County landmark.
“It was always well-maintained, but it needed something to keep it going and give it another 40 years of life,” said Gillis.
Stewart agreed, adding, “Dougie Beaton (former superintendent) did a phenomenal job in keeping the nursery maintained. But the boilers had reached their end-of-life and we really had to make a decision. This is a facility worth investing in.”
The decision was to bring in a new pellet-burning stove from Sweden that has become the facility’s secondary source of heat. As well, the nursery burns sawdust in an existing stove as its main source of heat. And backing up both stoves is a new oil-burning stove.
The wood pellets are sourced locally through Shaw Resources and the sawdust is provided by Group Savoie.
“We’re very conscious of reducing our carbon footprint. There were some years we were burning 300,000 litres of oil. Through our upgrades, we burned just over 4,000 litres last year, and I wouldn’t use a drop this year if I can help it,” said Gillis.
The hot water feeds a central-heating plant that distributes the water to the nursery’s buildings through underground pipes.
Other capital improvements included new roofing for the greenhouses at a cost of $300,000; pressure tanks for the well system costing $100,000; a $200,000 upgrade of the cooling fans; refurbishing the two freezers; and a new 200-kilowatt generator at a cost of $250,000 to replace the aging generator. The new stove and boiler system came in at $1-million.
Meanwhile, Stewart said the nursery continues to improve on what it does best – growing trees.
“It’s a really well-designed facility for growing trees and this fits right into our reforestation program. Out of our 50-year breeding program, our trees grow 25 per cent faster. New technology means more wood on less ground,” said Stewart.
Gillis added, “Softwood seed management is one thing, but there are ecological goals to be recognized as well.”
He said the nursery is growing black ash for First Nations; red oak, sugar and red maples for the Margaree Salmon Association to be planted along riparian (river bank) areas; and Highland fir for the Cape Breton Highlands National Park.
“It makes sense to grow the wood you need on a small carbon footprint,” said Stewart.
There are currently 4.1 million trees growing at the Strathlorne Forest Nursery. They will be stored in the two 70,000-square-foot freezers where they will remain dormant until they are ready to be planted in the spring.
“We’re utilizing space that hasn’t been used in 20 years,” said Gillis regarding the freezers. “We can’t count on snow anymore, which exposes the seedling to freeze-thaw cycles. They are going to the field dormant instead of continually growing.”
Stewart commended Gillis and his staff for the amazing year they put in.
“When COVID-19 shut everything down in March, we had to put together a safety plan in a hurry. As a result, we became the first government department to come up with a return-to-work plan and it was one of the best years in 10 years here,” said Stewart.
Gillis said the credit goes to his staff.
“The people who have supported this place for the past 40 years, came in and did the best job in 10 years. They are a very dedicated group and deserve high praise given the uncertainty of COVID-19.”
There are basically two seasons at the nursery – the spring season for starting seedlings and shipping product, and the second season in November for winterizing the young trees.
At its peak, the nursery employs 22 people, a mix of seasonal, casual, and summer students.
And unlike the early years of the nursery, it no longer uses insecticides or herbicides.
“We’re using a biological control where we work on the preventative side to stave off problems before they happen with better irrigation and greenhouse practices,” said Gillis.