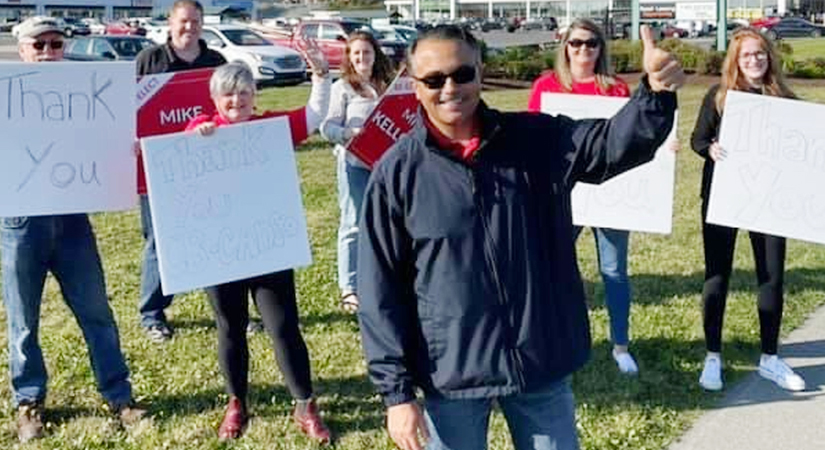 Member of Parliament, Mike Kelloway, and a group of Liberal supporters in Glace Bay on Tuesday morning after his big win on Monday night. (Facebook)

“Thank you Cape Breton-Canso!” said Kelloway.
“I’m absolutely humbled to have been elected to represent our incredible communities in Ottawa for a second term,” he said.
“To everyone who I spoke with at the doors, on the phone, or via email, thank you for sharing your stories with me. It’s because of you that I know with hard work and collaboration, we can help Cape Breton-Canso reach its full potential,” he added.
Kelloway held the Liberal seat and will remain MP of Cape Breton-Canso.
He said now it is time to get back to work.
Kelloway celebrated the win with family, friends, and supporters at Flavor 19, the restaurant at the Lingan Golf Course in Sydney.
His Conservative counterpart, Fiona MacLeod, who went for the throat from the offset of the campaign, had him trailing by about 600 votes at one point during the night.
Kelloway came out on top with 17,348 votes, MacLeod brought in 13,133 votes, and Jana Reddick for the NDP, came in third with 5,395 votes.
The People’s Party of Canada candidate Brad Grandy finished fourth with 1,589 votes.
Kelloway owes his win to running a really strong campaign and working exceptionally hard.
“For me, this is not a job; it’s an act of service. An MP’s job is to get in the foxhole with the people you represent,” he closed.