Tangled up, a Blue Heron is rescued in Cheticamp 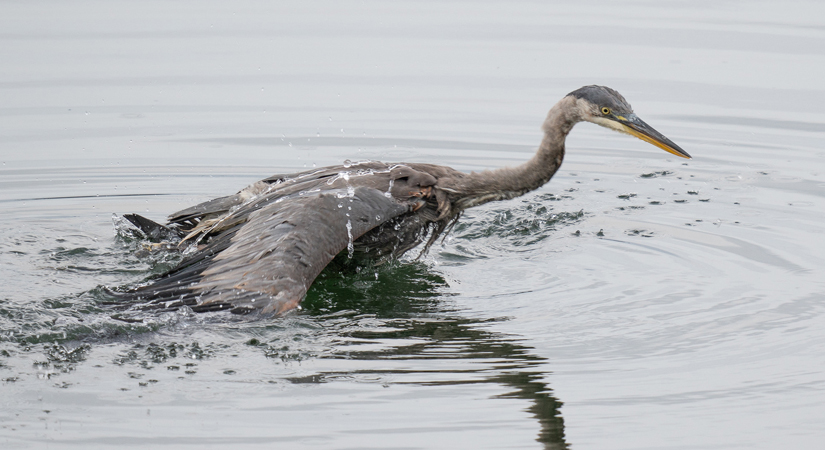 This Great Blue Heron was rescued in Cheticamp after getting tangled in a fishing line.

Local photographer, Michel Soucy, was out running errands when he noticed something peculiar out in the water, just past the government wharf in Chéticamp.
“I noticed a bird out in the water, and it was big, at first I thought it was a Canada Goose, but so far out in the ocean?” said Soucy, in an interview on Monday.
He said, his next thought was that it was probably a Great Blue Heron, but again, why so far out?
And the animal seemed to be struggling.
Soucy ran home and grabbed his camera and long lens.
“It was obvious that this animal was struggling – I snapped a few quick pictures and then started calling people that I thought could help,” explained Soucy.
He said he then saw a fisherman that he knew.
“It was Perry Muise,” said Soucy.
Muise told him that he was fishing off the wharf and the Great Blue Heron inadvertently flew out from under the wharf and got tangled in his fishing line, to the point where Muise’s fishing rod got pulled right from his hands.
He said it happened so fast.
“This was all in about 15 minutes,” said Soucy.
“Perry got down on the rocks and managed to get the bird, which at this point had its head under water and was completely exhausted,” explained Soucy.
“He managed to cut the bird free from the line and the rod. At this point, he had been in touch with numerous organizations, one of those being Hope for Wildlife,” said Soucy.
Hope for Wildlife is the first facility of its kind in Nova Scotia where they rescue, rehabilitate, and release animals back into the wild when they have been injured or orphaned.
They’ve been in operation since 1997, and have rehabilitated and released over 40,000 injured and orphaned wild animals representing over 250 species.
Animals they treat receive food, medicine, shelter, and whatever else is needed to ensure a successful return to the wild.
They receive more than 20,000 calls to their wildlife helpline and take over 4,500 wild animals into their care each year.
The average length of stay for patients is six weeks.
“They told us to leave the bird to see if it would regain its strength on its own, so we laid it on the ground,” explained Soucy.
“The bird did not look good,” said Soucy.
He added that it seemed to be in pretty rough shape.
Concerned that the bird wasn’t going to rally on its own, they began to reach out to people on social media to see if they could organize getting the bird to the wildlife refuge.
“Just then, Jennifer Morrison and her daughter arrive saying they will take the bird to meet someone in Baddeck who can take the bird to the Sydney Animal Hospital,” explained Soucy.
From there, he said, the hospital would be able to get the bird to Hope for Wildlife.
“Well, halfway to Baddeck, Jennifer said that bird came to and started hissing,” said Soucy.
“Mack” (the name lovingly given to the heron) began to look remarkably better.
“Nothing like transporting an injured bird that decides to regain its strength halfway through Lake O’ Law,” remarked Morrison on her social media.
When the Blue Heron poked his head up out of the box, Laura (Jennifer’s daughter) said she almost passed out.
The pair awaited the transfer of the beautiful bird to the care of the Sydney Animal Hospital and Hope for Wildlife.
“Thank you, Jennifer, Laura, and Perry, and all who offered to assist,” said Soucy.
The Oran reached out to Hope for Wildlife, but their website states that when checking in on patients they are so busy that it takes sometimes up to 10 weeks for them to update on the condition of rescued animals.
They collect a wide range of data from animals treated at our rehabilitation centre, which provides valuable insight into the health of local populations.
Their work also offers opportunities to learn about the protection of various species in complex and continually changing biological, social, and political environments.
We wish Mack a speedy recovery and thank the keen eyes of local photographer, quick actions of Muise, and courage of Jennifer and Laura for providing transport.
A “Great” team effort!