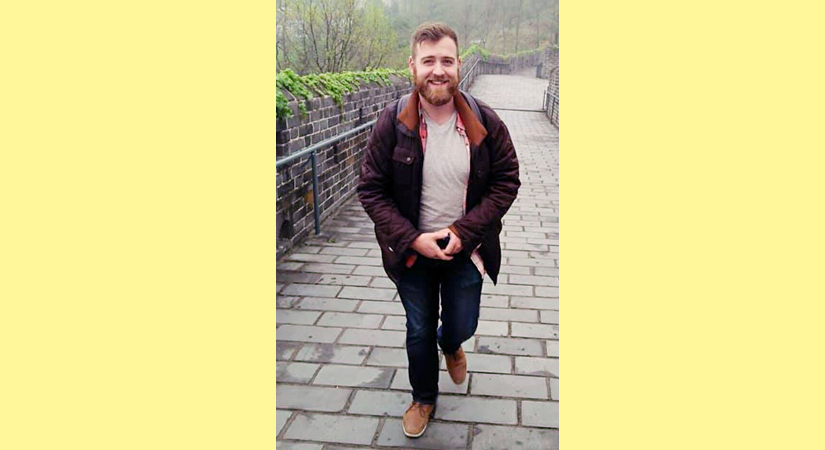 Merrick MacNeil is the son of Ethel and Bernie MacNeil of Glenora Falls.

-by April MacDonald
Two things: your sister and social media have a talent in sharing a great scoop.
Merrick MacNeil’s sister is Ambrah MacNeil, who is also a teacher and is the only girl out a slew of male siblings. She very recently posted that she wanted to give a shout out to her “little brother who is working non-stop with his team to prepare meals every day for displaced citizens at his school in BC.”
A great tip indeed and certainly no surprise as Merrick comes from a family who are givers, doers, whole-hearted community believers, and great cooks.
So, The Oran does what it does best: reaches out, listens and asks questions.
Merrick lives and teaches in Hope, British Columbia.
Merrick said that he was about to take his dog for a walk and it was raining hard so he asked Google, “When will it stop raining?,” and it said “rainfall warning is in effect, the rain is expected to continue until Wednesday.”
He said that at this point he thinks it was only Sunday.
“That night the power went out,” said MacNeil.
He explained that a Facebook group had been started in order to keep everyone informed and that there was speculation that they might have around 100 cars with people who were stranded.
The next day the school was opened as a temporary shelter.
“I don’t know who made that call,” said Merrick.
He said he started wondering how it was going over at the school and that he wanted to unlock his classroom and offer up some apples and juice that were available from the food room.
“So, I go over thinking there might be 50-60 people. I walk in the door and there are around 300-plus,” he said.
He explained that one of his colleagues apologized to him saying, “There was no time to ask, we took anything we could from your room.”
“I thought ‘perfect’ that’s why I came over. Then I asked how I could help,” explained Merrick.
He said that one of his bosses was there and that she said he could lend a hand by making coffee.
“I spent the next few hours helping making pot after pot of coffee, non stop,” he said.
“When the line was gone I asked if we had a plan for dinner. I was told, no, but if I could come up with something, go for it,” said Merrick.
So, he went to his classroom and took all the canned food down and started making clusters – “this in a chili, this in a soup.”
A few others came and joined the cause to help and they just started making everything they could.
“Huge pots of cream of mushroom soup, veggie soup, chili, chicken noodle, Mac and Cheese, ramen noodles,” said Merrick.
He said that they received a phone call from a local store who said they could come get something from the store if they needed it.
“I asked for a 10 dg bag of rice. We ended up feeding over 600 that night,” said Merrick.
The next day Salvation Army started sending help.
He said that when the donations started rolling in, most of his day was spent accepting and refusing donations from stranded people and from Hope locals.
“We made pancakes for the next day. I’d say we made over 750. The day after that, we did scrambled eggs and toast. Thirty-five loaves of bread and over 500 eggs,” he explained.
“How it all worked out is a mystery to me. When I needed help, someone walked in the door. When I needed food, it was there. Truth be told, I wish I could have cooked more,” said Merrick,
He said that he has a passion for cooking (one that runs in the family).
“I love to cook and share my food. Most of the time, I was giving jobs to people, planning, dealing with the mountain of donations. The town really came together in a big way, we had hundreds at the school but a bunch of smaller shelters also popped up,” said Merrick.
He said locals were taking people into their homes as well.
One woman he worked with had 14 people staying at her place.
“My girlfriend was also coming in and helping with the morning work. She made 11 fruit loaves, that’s 132 portions. Lots of teachers, students, community members came out. We had a few people helping that were also staying at the school,” explained Merrick.
He described himself as a “home cook who’s a teacher.”
“I worked in kitchens growing up but I’m no chef. Never in a million years would I think I could lead a group to produce this volume,” he added.
The Coquihalla Highway, which links Metro Vancouver with BC’s Interior, had sustained significant damage from multiple mudslides.
Highway 7 was also blocked, which left many motorists stranded in Hope.
The town had been supporting about 1,100 people with meals, and about 900 had been sleeping at the local church and at the high school where Merrick teaches.
I guess if you are going to be stranded anywhere in Canada, what better place to be than Hope – especially if you have a MacNeil from Glenora Falls in your corner, keeping your belly full.