Lloyd A. Gillis dies at 79 in his ‘home town’ - Inverness loses dreamer; helped shape its tomorrow 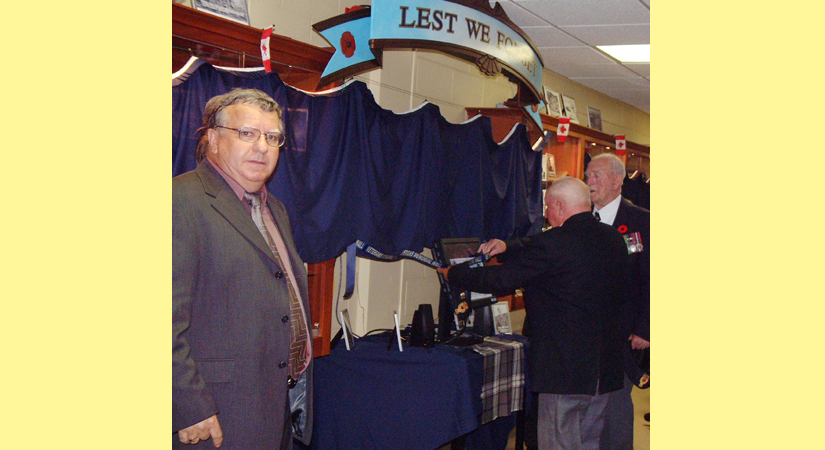 Gillis at the opening of The Veterans Wall

-by Rankin MacDonald
In the final decades of the past century his name had to be right up there with those who sustained and shaped his community.
Blessed with a big brain, unlimited vision, and a love of his home town, Lloyd A. Gillis’s touch will long be felt in Inverness.
He passed away at the age of 79 on Thursday night, a night he loved to celebrate as a God-fearing Celt.
When we were young, living in a Red Rows company house, he used to say that he wanted to be a doctor because it was the last way to pay back but finding funding for 10 years of study was almost an impossibility in those days.

So, he poured himself into the sciences and hoped what he taught would one day encourage a student to embark on a medical career.
It worked well and doctors there be.
Then it was to the town he and his friends turned to. They wanted to spruce it up and make it grow and this road is one that must be well travelled to reach success.
They started a Kinsmen Club, learned how to connect across the province and for one time only the District Governor of the Cape Breton Kinsmen came from Inverness in the person of Lloyd A.
There was an arena to be built but a larger vision was needed to keep the old town from dying, from losing it all.
In the 1980s, it was time to bring back the Inverness Development Association and while it seemed successful at first, for three years it had three members, Lloyd A., Dougie Cameron, and myself.
Then Lloyd A. turned to our assets, the beach, the “picnic field,” the tailings, and a walkway that would skirt the Gulf.
Many arms were twisted, but the beach became more tourist-friendly, the boardwalk was laid and the government was convinced to clean up the town and the tailings.
Lloyd A. was always there adjusting the rudder as the IDA grew and the projects arrived. He did this while being the school principal.
Today, Inverness is a growing community with a new spirit and a new hope that was planted by Gillis and others.
He spent six years as a municipal councillor to make sure Inverness stayed the course.
That included a Planning Strategy.
The days spent turning Inverness around were enjoyed by all those who stood on the barricades and with a shot of single malt it was always what was next.
The project that I believe was his crowning glory was the Veterans Memorial Wall, which entails the photos of all the men and women who served their county during the wars that kept us free.
When you look at the face of a vet, remember Lloyd. It’s the way it should be.
His accomplishments were big, his family first, and his friends, both human and fur, meant the world and the town to him.
We can all thank Judith, Todd, and Timmy for loaning him to Inverness to make it the new town it is today.