Residents concerned about lack of signage for wind warnings 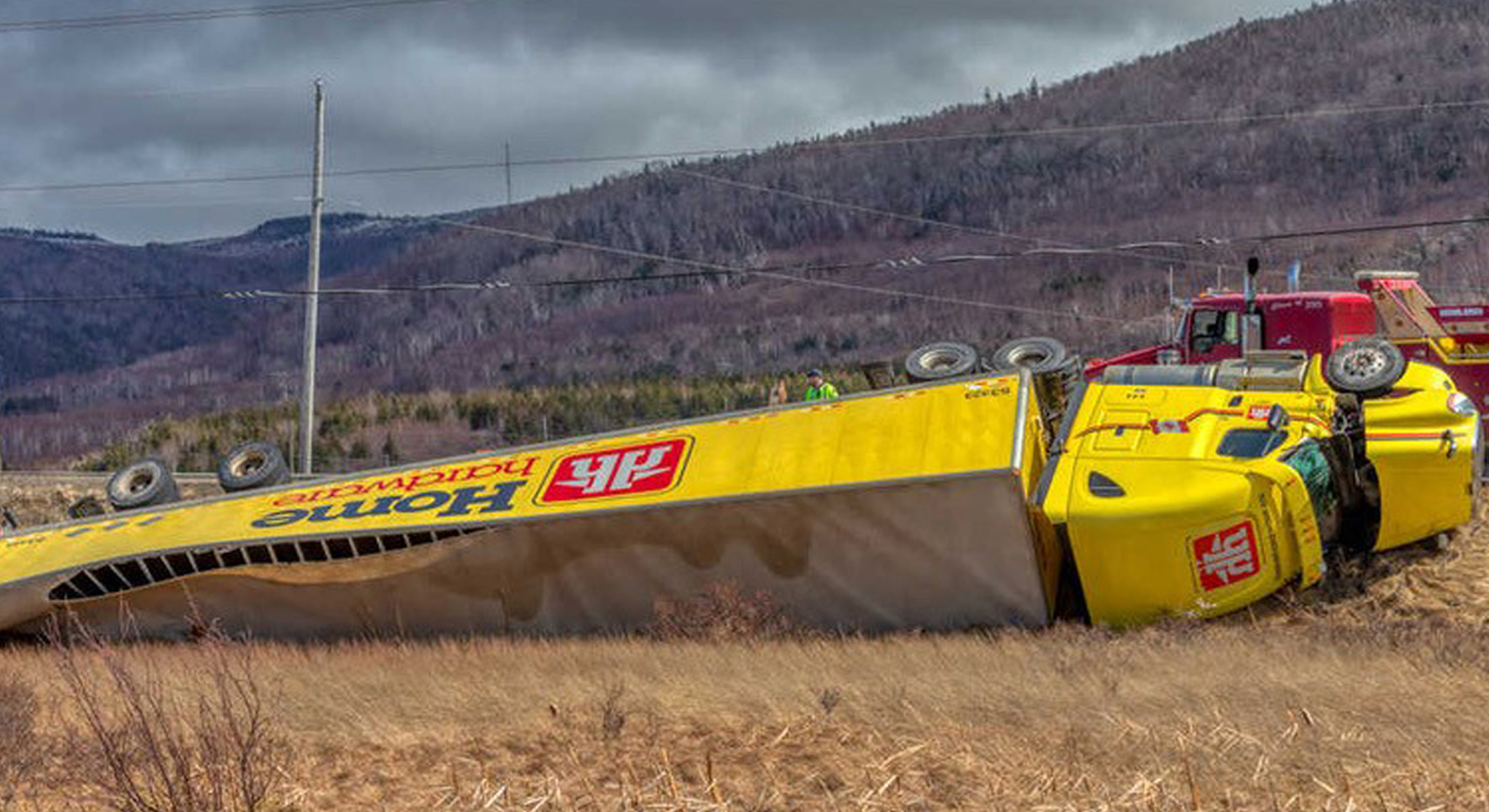 Home Hardware trailer toppled over in Point Cross as a result of high winds. Photo by Michel Soucey

-by Rosie Aucoin-Grace
Part of our county’s coastline was pounded with a suête last Friday, March 25th, with recorded gusts of 158 km/hr by Cape Breton Weather Mesonet – a cooperative network of privately owned weather stations across Cape Breton.
Suêtes, are strong south-east foehn winds on the west coast of Cape Breton Island. The term suête originates from the Acadian French inhabitants of the Chéticamp area as a contraction of sud est (south-east). The western edge of the Cape Breton Highlands plateau slopes abruptly down to sea-level from approximately 400 metres altitude. South-easterly winds lifted on the east side of the island are flowing across the plateau and frequently accelerated to high velocities on the steep down slope in stable air mass condition. The weather stations in the area have recorded wind speeds of over 200 km/hour on various occasions and it seems with climate change, these fierce winds are getting stronger and perhaps even more frequent.
Many locals are familiar with the meteorological phenomenon and can take appropriate precautions. But for those who are just passing through, particularly those driving high-sided vehicles, the danger can come without warning. Such was the case of the driver of a Home Hardware transport truck who was blown clear off the road by the wind in Point Cross on Friday afternoon. He had just delivered supplies to the Chéticamp Co-op and was on his way back with an empty truck. Rescue vehicles rushed to the scene and thankfully there were no fatalities.
According to Wayne Chiasson, fire chief of the Cheticamp Volunteer Fire Department, “We were called out to the scene. Our emergency vehicle made it but our fire truck was having difficulty in the wind, including the tarp trying to blow off so when they reached Flora’s Gift Shop, they were instructed to turn around. They took the back roads to head back to the station.”
“We were told that the driver of the toppled truck was shaken up but okay. This is an on-going issue, and something needs to be done. In my opinion, there should be flashing lights in Belle-Côte and maybe even some in Point Cross when we have wind warnings,” says Fire Chief Chiasson.
This can be a horrific experience, not only for the driver of the high-sided vehicle but also for those who may come into its path. It is an accident waiting to happen and many feel it is high time this issue be taken seriously, and action takes place to avoid more incidents of this nature or worse, a fatality. Accidents during these gusty conditions puts everyone at risk including the emergency response teams.
There was quite the discussion in the Suête Winds group on Facebook as many residents of our county and even from elsewhere were outraged that there are still no warning signs with flashing lights to caution drivers who travel in certain sections, especially in the Acadian region. There is stretch of the Cabot Trail in Point Cross near what we know as “la turn à Flip” and also in Saint-Joseph-du-Moine that has a history of toppled high-sided vehicles during wind storms.
On Saturday afternoon, that section of the Cabot Trail was closed to all traffic while a towing company was retrieving the heavily damaged tractor trailer from the ditch. By far, not an easy task. Many bystanders, who saw the extensive damage to the rig, knew that the driver was very fortunate and that his fate could have been much worse.
A reliable source spoke of people making a plea for cautionary signs expressing concerns regarding these high sided vehicles that must deliver goods daily to this area and have to brave the high winds in this part of the county. It was encouraged that all other businesses and concerned individuals who depend on these drivers for deliveries to do likewise. Soon the fishing season will open and again we will see an influx of these rigs going in and out of the area, carrying our fish to market.
Newly-appointed municipal councillor for the Municipality of the County of Inverness, Claude Poirier, of Chéticamp says, “Although we do have small signs indicating danger in certain sections, it seems this is not enough for cautionary measures during suêtes.  I will be looking into this matter and bring the issue to council for larger signs and flashing lights to be installed.” He added, “I want to mention, this is a provincial matter – the Department of Highways are responsible for traffic signage but we can certainly make it known that this is needed.”
Yes, Mother Nature needs to be respected. When the gales are gusting this strong, the best option is to hunker down and stay put when possible. To those who pay no heed, hence is the proof in the many incidents, damage that has happened during suêtes over the years.
For those who have never experienced a suête, most cannot imagine its relentless power and the havoc it can cause in our communities. It is well said, “You have to experience it to believe it.” There is no doubt, it is time to make sure our voices are heard before we witness a fatality when it comes to the installation of proper cautionary signs in the Acadian region of our county especially to over height vehicles.